Mites (Acari) are a subclass of the arachnids (Arachnida) in the tribe of the arthropods (Arthropoda). With around 50,000 known species in 546 families, they are the most species-rich group of arachnids. Since they include the smallest arthropods, it can be assumed that many species have not yet been discovered. The science of the mites is called acarology or mite science. 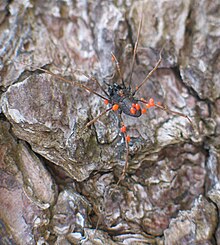 While spiders are exclusively predatory and generally have a similar physique, mites differ much more from one another due to their different way of life. The smallest mites are only about 0.1 millimeters in size. The largest are ticks , in which the females can be up to three centimeters tall when fully sucked. Like spiders , mites have eight legs, although in the larval stage they often only have six legs.

Since mites are not particularly fast in absolute terms, many of them use other animals, such as insects, as a means of transport (see phoresy ) to cover greater distances. Some mites suck the body fluids of their host during the ride .

A tropical horn mite species ( Archegozetes longisetosus ) is, in relation to its body size of 0.8 mm, the strongest animal in the world: it can hold almost 1200 times its own body weight, about five times as much as would theoretically be expected.

While there are species of mite that use a sense of sight to hunt live prey, individuals of many other species of mites are characterized by blindness. The central eyes of the arachnids are generally absent in mites, or they are fused into a single eye. In general, mite animals have a number from zero to five.

Mites have colonized a great many habitats. Around half of the known species live in the soil; under optimal conditions, a population density of several hundred thousand mites per square meter is achieved. Among the habitats, however, there are also unusual ones such as monkey lungs, nostrils of birds and tracheal openings of insects . Most people also harbor mites, hair follicle mites, for example on the hair roots of the eyelashes. Even aquatic habitats are colonized by freshwater mites.

In addition to predatory mites, there are those that feed on plants or fungi, and others that live on carrion or dead tissue. There are also many parasites among the mites . 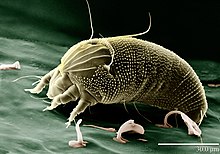 Although the majority of the species live in the soil and make a significant contribution to humus formation there, some mite species are still considered to be significant agricultural pests. They can appear as storage pests in flour or grain stores. The flour mite ( Acarus siro ) can change the ingredients due to its infestation, and it is also often perceived as nauseating . In general, mites are difficult to control because of their resistance to pesticides. That is why research has recently been focusing on alternative methods. An attempt is made to change the composition of the bacteria inside the mites and thus to reduce their resistance.

Mites as a cause of disease

Diseases caused by mites are known as acariosis .

House dust mite excretions or mite parts can trigger house dust allergies in humans , as a result of which a large proportion of house dust allergy sufferers develop asthma after some time without treatment . The consumption of food contaminated by mites (pastries) can lead to severe symptoms and even anaphylaxis .

Grave mites drill passages in the skin of their host and lay their eggs there. This causes severe itching in the person concerned. The larvae that hatch from the eggs cause scabies in humans and mange in animals .

Hair follicle mites (genus Demodex ) live in the hair follicles of mammals. Demodex canis lives in the skin of many dogs, but only in dogs with a weakened immune system does it lead to a typical skin disease. Demodex folliculorum can be found in all people as a harmless inhabitant of the hair follicles and skin inhabitants, where it feeds primarily on fat, but also bacteria . A connection with rosacea is suspected but unproven .

Feather mites parasitize on or in the feathers of birds.

Different types of mites (Trombiculidae) In humans, the Trombiculiasis cause (Harvest scabies).

In honey bees , some mites such as B. the varroa mite animal diseases ( varroosis , acarapidosis , tropilaelapsosis ).

Mites as vectors of disease

Some species of mites can transmit typhus , rickettsipox , tularemia, and St. Louis encephalitis through their bite . The representatives of the suborder ticks can transmit dangerous diseases like viral meningitis ( TBE ), Crimean-Congo fever , typhus or Lyme disease when they suck blood .

Acaricides are used to control mites and ticks.

Many predatory mites are also classified as beneficial insects because they fight pests in viticulture, agriculture and horticulture . For this purpose, they are grown in greenhouses under controlled conditions.

Mites of the species Thyroplyphus siro (former name Tyroglyphus casei ) are used as livestock for the production of mite cheese .

See also: Systematics of the mites

The six orders of the mites are summarized in two superordinates:

Mites as transport parasites on a dung beetle 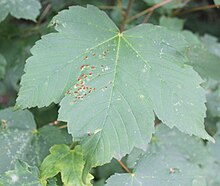 Mites are not uncommon in tertiary amber (including Baltic amber , Dominican amber ). Older evidence, however, is extremely rare and was completely absent from the Mesozoic era until recently . The Protacarus crani mite from the Scottish Devonian is considered the oldest fossil of this taxon and at the same time the only evidence of a mite from the Paleozoic . In 2012, two specimens were discovered in 230 million year old Triassic amber from the Italian Dolomites. The two species of fossils belonging to the gall mites (Eriophyidae) were named Triasacarus fedelei and Ampezzoa triassica by their discoverer David Grimaldi ( American Museum of Natural History , New York) . The fossil forms usually differ only slightly from their more recent relatives, so that paleozoologists assume that the evolution of the mites stagnated early on.