The anaphylaxis (formed incorrectly from ancient Greek ἀνά ana "on (-wärts) again", and φύλαξις phylaxis "guarding, safekeeping") is an acute , allergic response of the immune system of humans and animals to repeated supply of exogenous proteins and affects the whole organism.

Anaphylaxis is an overreaction of the adaptive immune system . This results in excessive release of mediator substances ( histamine , leukotrienes , etc.) by mast cells and basophilic granulocytes , which can be caused by the mediating effect of special antibodies ( immunoglobulin E ).

They require awareness . After the first antigen contact of plasma cells, an antibody of the IgE type is secreted (released), which attaches to basophilic granulocytes and mast cells with the Fc content. The free Fab part of the IgE molecule thus points into the extracellular space .

The reaction of antigens with these cellular IgE antibodies is fundamental , corresponding to a type 1 reaction according to Gell and Coombs . The antigen ( molar mass 10,000 to 70,000 u ) usually has two epitopes , so that bridges between IgE antibody molecules occur.

After stimulation by the antigen, the basophilic granulocytes and the mast cells release mediators ( histamine , prostaglandins , leukotrienes , platelet-activating factor (PAF) and others) and cytokines .

The mediators lead to the clinical picture of anaphylaxis (see below). The secretion of the cytokines in turn leads to the attraction of neutrophils and thrombocytes , which in turn release further mediators that are important in the inflammatory process.

The effects of the released mediators are

A distinction is made between the classic anaphylactic reaction, which is an IgE-mediated allergic event, and the IgE-independent anaphylactoid reaction.

Both events follow the same clinical picture. In anaphylactoid reactions, however, it is not contact with IgE antibodies, but chemical, physical and osmotic stimuli that lead to the release of mediator substances from mast cells and basophilic granulocytes.

So-called idiopathic anaphylaxis, in which the specific trigger cannot be determined, can u. a. caused by underlying and undiagnosed mast cell diseases (such as mast cell activation syndrome / MCAS or systemic mastocytosis ), as these lead to an excessive release of mast cell mediators. 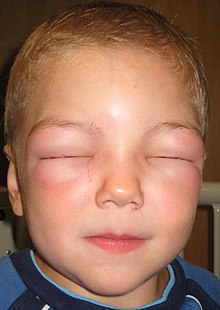 Toddler with Quincke's edema . The swelling prevents it from opening its eyes.

Anaphylaxis: signs and symptoms of the systemic reaction which, if left untreated, can lead to death within minutes from severity 3.

The extent of the allergic reaction can vary greatly from person to person. An anaphylactic reaction has two phases:

Within minutes to hours:

An anaphylactic shock is a life-threatening anaphylaxis. He can z. B. by insect venom, food, infusions, immune serum or blood serum administration, animal allergens or (in the case of a drug allergy) drugs. The widening of the blood vessels leads to a sharp drop in blood pressure , and fluid leaks from the vessels into the surrounding tissue. Due to the drop in blood pressure, there is a reduced blood flow to vital organs.

The faster the symptoms appear during the injection of a drug, the more life-threatening the condition. In the worst case, the first symptoms appear ten seconds after the injection has started. These are very unspecific - e.g. B. nausea, circulatory problems, nausea or vomiting, dry mouth, burning tongue, visual disturbances, acute shortness of breath, concentration disorders.

Skin reactions, itching, wheals or the development of eyelid edema are also possible, but often completely absent because of the rapid development.

As the process progresses, the typical symptoms of shock appear; H. the pulse becomes flat and rapid and unconsciousness and subsequent death can occur.

Anaphylactic reactions are classified into four degrees of severity:

At the first signs of shock (sweating, nausea, cyanosis ), the injection is interrupted, as far as possible, or allergen exposure is ended. If a doctor is not yet present, an emergency call should be made. The patient is shocked by lifting the legs and, if available, oxygen is given through a mask. Unconscious are in the recovery position brought in a cardiac arrest is the resuscitation begun.

If the anaphylactic shock is triggered outside of medical supervision (e.g. by a wasp sting or food allergy), autoinjectors containing adrenaline can be used to alleviate the acute symptoms.

The doctor creates a venous access and begins volume therapy with crystalline electrolyte solutions ( Ringer's solution , saline solution ). In the event of unconsciousness and / or breathing disorders, intubation and artificial ventilation must be considered. Drug therapy consists of intramuscular or intravenous administration of adrenaline , glucocorticoids and antihistamines (combined administration of H1 ( clemastine , dimetinden ) and H2 antagonists ( cimetidine or ranitidine )).

People with a known risk who could suffer anaphylaxis on contact with a certain allergen, e.g. insect venom, have the option of carrying an emergency kit with them so that they can give themselves a life-saving adrenaline injection before the doctor or paramedic even arrives can. Even then, an emergency doctor has to be called in. The emergency kits also contain a fast-acting antihistamine and cortisone.

In 1902 Paul Portier and Charles Richet described the following phenomenon: They injected dogs with an extract from the venomous sting of the velvet anemonefish . The surviving test animals received the poison again two weeks later. The hoped-for immunity or protection against the toxin (phylaxis) did not materialize. Instead, the dogs went into shock. The blood pressure fell, the blood could no longer clot, and changes in the intestinal wall were pathological. This condition has been called anaphylaxis or anaphylactic shock . The term “anaphylaxis” coined by Richet should be an expression for the opposite of “phylaxis”, Greek for “protection”, and should - when using the α-privatum - correctly be called “aphylaxis”. In 1909 Artur Biedl and Rudolf Kraus put forward the theory that the body's own substances are responsible for the reaction. A year later isolated and identified Henry Dale and George Barger of ergot , the histamine .