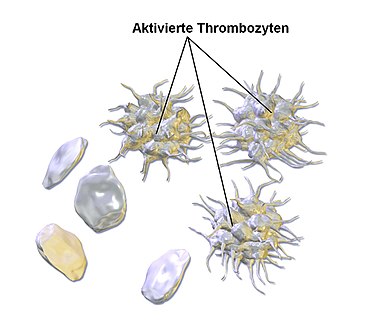 Discoid, inactive platelets on the left, activated platelets with pseudopodia on the right .

Thrombocytes or thrombocytes ( singular of the thrombocyte ; from ancient Greek θρόμβος thrómbos "lump" and ancient Greek κύτος kýtos "cavity", "vessel", "envelope") or platelets are the smallest cells in the blood . They play an important role in blood clotting by attaching themselves to the surrounding tissue (" platelet adhesion ") or sticking together (" platelet aggregation ") when a blood vessel is injured , so that the injury is closed. In addition, they release substances that promote coagulation.

Platelets have neither nuclei nor genetic information ( DNA ). They are caused by pinching off megakaryocytes that are located in the bone marrow .

Platelets are created in the bone marrow, where they are pinched off by megakaryocytes, huge platelet-forming cells. Up to 8000 platelets can be cut off from such a bone marrow cell in the course of a lifetime. This process is called thrombopoiesis and is supported by the hormone thrombopoietin .

Platelets have a diameter of 1.5 µm to 3.0 µm and are flat like a disk ( discoid ). During blood clotting, platelets change their shape due to activators such as ADP , collagen , thromboxane and thrombin . The protuberance of pseudopodia takes place , which is accompanied by a multiple increase in surface area. This promotes thrombus formation through fibrin-mediated binding with other platelets. This process describes the function of platelets and is called platelet aggregation .

The average lifespan of platelets is eight to twelve days. The breakdown takes place mainly in the spleen , in which a third of the platelets are also temporarily stored, as well as in the lungs and, to a lesser extent, in the liver .

Despite the lack of a cell nucleus, mRNA from megakaryocytes was found in platelets . They are therefore capable , albeit to a limited extent, of the new synthesis of proteins . Like other cells , they have mitochondria , but a special form of the rough endoplasmic reticulum (rER), the canalicular system. It serves as a calcium ion store, the rapid emptying of which into the cytosol is an essential prerequisite for physiological platelet aggregation . The storage granules are important as further compartments in platelets : They are divided into α-granules, electron-dense granules and lysosomes and contain substances and proteins that promote aggregation , the secretion (release) of which is necessary for platelet function. The plasma membrane of platelets contains among other things the protein tissue factor (engl. Tissue factor ). It is assumed that vesicles with this protein constrict themselves and can now be found as circulating microparticles in the blood. This ability, which they have in common with monocytes , helps blood to clot .

Enlargement of the spleen ( splenomegaly ) or immune thrombocytopenia lead to a reduction in the average platelet life, which leads to an overall low platelet concentration with a constant production rate. Conversely, after removal of the spleen ( splenectomy ) there is a sharp increase in the number of platelets due to the lack of spleen-mediated breakdown.

There are three types of disturbance or abnormality in platelets. A distinction is made between primary (mostly genetic) deviations, which are sometimes also called idiopathic or essential, and secondary deviations due to another underlying disease or disorder. The three types of deviation are:

Presumably, thrombocytes were described for the first time in 1844 by Alfred Donné (1801–1878) as “globules” in blood plasma (De l'órigine d. Glob. Du sang etc. Comptes rend. Soc. Biolog. 1844, t. XIV). In 1865, Max Schultze described them much more precisely in the archive for microscopic anatomy , but did not recognize them as a separate type of cell, but instead considered them to be degradation products. Giulio Bizzozzero corrected this mistake in 1883 and was the first to recognize the role of platelets in blood clotting.

The lysate from (donor) platelets is used in human cell culture as a nutrient additive ( human platelet lysate ).