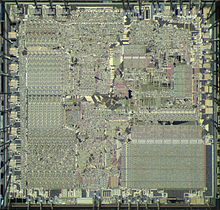 The Intel 8088 is a 1979 imagined 16-bit - microprocessor from Intel . It differs from its "big brother", the Intel 8086 , which was introduced in 1978 , only in its 8-bit external data bus and a command queue that has been reduced from six to four bytes ( English prefetch queue ).

The introduction of the only 8-bit wide data bus made it possible to use cheaper 8-bit components for the rest of the computer's electronics, but at the expense of speed. Because of this, the 8088 was barely faster than conventional 8-bit processors. Nevertheless - or possibly because of it - it was selected by IBM as the CPU for the IBM PC . IBM wanted on the one hand to advertise with 16-bit technology, on the other hand not to compete with its own minicomputers . In addition, parts of the electronics were developed from a computer called the IBM System / 23 Datamaster , which was developed at the end of the 1970s but was unsuccessful on the market , and whose 8085 CPU had an 8-bit data bus. IBM's decision in favor of the 8088 was the reason for the success of the x86 family, although many experts considered the CPU to be rather weak and the architecture as a whole as not very forward-looking. In addition to the NMOS version, a CMOS version as 80C88 was also offered.

The 8088 can operate in a minimum and a maximum mode . The selection is made via the MN / MX pin 33. If it is switched to 0 V (low), the 8088 works in maximum mode, at +5 V (high) in minimum mode. Compact, simple circuits can be realized in the minimized mode; the processor itself provides the necessary control lines. The maximum mode is primarily intended for multiprocessor operation or for working with the 8087 math coprocessor . The required control lines are not provided here, but are generated by the 8288 bus controller .

The 8088 has no internal oscillator. The required clock is generated externally by the 8284 oscillator chip . Furthermore, a latch is required to separate the addresses from the multiplexed address / data bus , e.g. B. the 8282 .