Intel Atom is the brand name of a number of microprocessors and single-chip systems (English. Systems-on-Chip , SoCs ), which are developed by the company Intel for use in particularly inexpensive and energy-saving systems. Products under this brand name were first presented in 2008. Intel Atom processors and SoCs use an x86 instruction set , which was supplemented by an x64 instruction set from the Diamondville generation . Typical areas of application for Intel Atom processors and SoCs are subnotebooks , mobile internet devices , tablet computers , netbooks , smartphones and infotainment systems in automobiles, but also inexpensive server solutions and nettops . The models of the Intel Atom family mainly compete with the AMD products of the Bobcat and Jaguar series as well as with various one-chip systems based on the ARM architecture .

The first generation of the Intel Atom is marketed under the name Atom Z500 series , internally this single core processor is called Silverthorne . These processors are manufactured in a 45 nm process and have a 512 KiB L2 cache . They support Hyper-Threading and Streaming SIMD Extensions (SSE commands) up to SSSE3 . The processor was presented on April 2nd, 2008 at the Intel Developer Forum in Shanghai. Main areas of application for Silverthorne processors are z. B. mobile computers and embedded PCs . 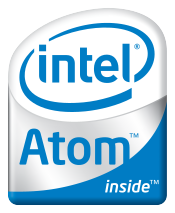 Diamondville was introduced in June 2008 as processors for installation in netbooks and nettops . Technically, they hardly differ from the Silverthorne. The desktop versions (Atom 230 and Atom 330) lack the SpeedStep energy-saving technology, but they are the first Atom processors that can execute the Intel 64 instruction set.

The Pine Trail platform was presented on December 21, 2009 as the successor to Diamondville . The biggest difference to the predecessor is the graphics processor and memory controller being integrated into the processor core , which further reduces the space requirement and power consumption of the overall system. The code name for the processors of the Pine Trail platform is Pineview.

With Oak Trail, a chip combination from Atom Z600 alias Lincroft in combination with a special Southbridge called Whitney Point , the successor to Pine Trail came from 2011 . Unlike the Platform Controller Hub (PCH) MP20 alias Langwell provided by Moorestown , Whitney Point is also suitable for "normal" operating systems such as Windows or previous Linux versions that require a BIOS or EFI to boot. The PowerVR graphics of the Oak Trail should be suitable for HD video up to full HD format. The Oak Trail platform should preferably be used in tablet PCs because of its low power consumption . The Z670, presented at an Intel Developer Forum 2011, reaches a maximum of 1.5 GHz, and there is also the even slower version Z650 with 1.2 GHz. Both should be suitable for fanless cooled tablets or netbooks.

In September 2011 Intel presented the first 32 nm atoms (Cedarview / Cedar Trail ). The first devices with this chip generation appeared at the end of 2011, but because of driver problems they used an additional graphics chip instead of the built-in one.

On March 2, 2015, Intel introduced the "Atom x3" product line, previously announced under the code name SoFIA . "Atom x3" stands for three inexpensive SoC models with two or four CPU cores that are to be used in smartphones and tablets. For this purpose, purchased UMTS - or LTE - cellular modems integrated. The integrated GPUs come from the Mali range from ARM . The CPU cores implement Intel's Silvermont generation of micro -architecture . The SoCs are manufactured in a 28 nm process by the contract manufacturer TSMC .

In March 2015, Intel introduced the Braswell SoC generation . The code name Braswell stands for SoCs that are equipped with dual and quad-core CPUs and are manufactured in 14 nm technology nodes . Their TDP is given by the manufacturer as 4.0–6.5 W. Most models support a maximum clock rate> 2 GHz and are offered under the brand names "Celeron" and "Pentium" in the model series J3XXX and N3XXX. They are intended for use in netbooks, ultrabooks and microservers. For use in embedded systems there is the “Atom x5-E8000” model with a TDP of 5 W and four CPU cores that are clocked at up to 2 GHz.

Also in the first quarter of 2015, Intel presented the first SoC models of the Cherry Trail generation . The code name Cherry Trail stands for SoCs that are equipped with quad-core CPUs and manufactured in 14 nm technology nodes . The maximum clock rate of the different models is between 1.84 and 2.56 GHz. Cherry Trails are intended for use in tablets and are offered under the brand name “Atom” in the x5-Z8XXX and x7-Z8XXX product lines.

The use of the Intel HD Graphics integrated in the processor is also new in the Atom series. This generation was introduced in 2015 and 2016. After Intel still failed to enter the smartphone market with the Atom processors in 2015, they are now concentrating on larger device classes and are therefore integrating more functions from the desktop and even server area such as the virtualization extensions Intel Virtualization Technology ( VT-x) .

Some of the Atom processors have particularly effective energy-saving mechanisms that can further reduce the very low power consumption when idling. In addition to the Speedstep , which is now common with practically all processors, there is another economy mode when completely inactive.

In future products based on the Silvermont processor core, there will be another power-saving mode in which the data is retained in the level 2 cache, which accelerates the entry and exit from and into the energy-saving mode and thus saves even more power.

Mainly for reasons of cost, the Intel 945GC chipset was provided for the Nettop Atoms (Atom 230 and 330) . This chipset requires considerably more energy than the processor itself. A typical Atom 230 system with this chipset consumes about 25 W when idling and about 35 W when fully loaded. In addition, the performance of the graphics unit used here is very limited; the display of Blu-ray films or the use of modern 3D games is simply impossible.

However, Nvidia offers the ION platform as a counterpart , in whose 9400 chipset a corresponding Geforce graphics unit including HD acceleration is integrated.

The netbook Atom N270 is used in conjunction with the Intel 945GSE mobile chipset, which reduces the power requirement by around 10 W (in both cases) compared to the other variants. The N280 is used in conjunction with the 945GSE mobile chipset or the Intel GN40. The power requirement is around 8 watts with the 945GSE chipset or 16 watts with the GN40 chipset. Alternatively, an economical chipset called “Poulsbo” or “US15W”, specially developed for the Silverthorne Atom, is used. This includes the GMA500 graphics unit, which comes from PowerVR Technologies . The GMA500 is technically not related to the normal Intel GMAs and also requires its own driver , which is only available for Windows XP . Although it is able to accelerate HD videos, the 3D performance is even lower than that of the GMA950.

All Atom CPUs are offered in 441- or 437-ball µFCBGA and are soldered directly onto the board by the board manufacturers. A subsequent processor exchange is therefore excluded.

There is a completely new chipset for Pine Trail called "Tigerpoint NM10", which is technically only a southbridge . The graphics unit and the memory controller are now part of the processor. 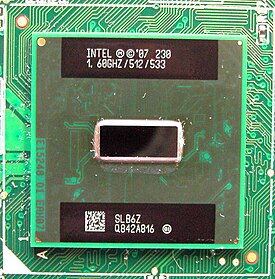 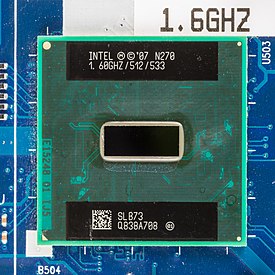