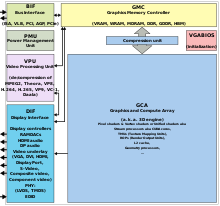 NV20 GPU of an Nvidia GeForce 3

A graphics processor ( English graphics processing unit , or GPU for short ; this partially translates as a graphic unit and, more rarely, video unit or English video processing unit and visual processing unit , or VPU for short ) is a processor for computers and game consoles that is specialized and optimized for the calculation of graphics and smartphones. In addition, it outputs the calculated graphics to one or more displays. In the past, graphics cards had no computing abilities of their own and were purely output cards. From the mid-1990s onwards, 2D capabilities and later rudimentary 3D capabilities were integrated, the graphics processor was hard-wired or its programmability was limited to its firmware . Since the mid-2000s, the main processor (or CPU for short ) has been able to load programs onto the graphics card or into the graphics unit, which can thus be flexibly programmed to a limited extent.

GPUs can be found on the (sometimes of CPUs with integrated graphics unit APU , called on the) main board (Onboard as integrated graphics processor as well) on expansion cards ( plug-in card ). In the latter case, several GPUs are possible on one graphics card, or several graphics cards per PC. For notebooks there are external expansion boxes into which a graphics card can be plugged; A dedicated graphics unit can be built into docking stations . Almost all graphics processors for personal computers produced today come from AMD , Intel or Nvidia . The integration on plug-in cards, on the other hand, has been with other manufacturers for some time, with the exception of special and reference models. 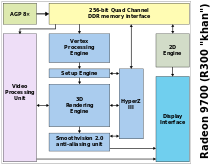 To connect a screen to a computer - for example via MDA , CGA, etc. - you need a so-called screen adapter (analog network adapter). The chip on the (e.g.) ISA card is a comparatively simple video display controller . Any calculations for image synthesis are carried out on the CPU; the display controller simply packs this data stream into a corresponding signal (CGA, EGA, ...) for the screen. The card also contains a little memory, the so-called screen buffer. display buffer.

The RAMDAC is responsible for the conversion of digital data, which are present in the video memory / screen buffer, into an analog image signal.

These calculations can be carried out entirely or in part on the graphics card , the graphics processor or on another application-specific integrated circuit developed for this purpose.

Predecessors to graphics processors have been around since the early 1980s. At that time they only served as a link between the CPU and the screen output and were therefore called screen adapters (analog network adapters) video display controllers . They neither had the functionality, nor were they designed for independent calculations. Initially, they were primarily responsible for independent text and graphics output, thereby protecting the system bus . Some of them were later able to display sprites independently.

That changed in the mid-1980s with computers like the Commodore Amiga or the Atari ST . These already had blitting functions . In the x86 PC area, graphics processors with such additional functions emerged with the increasing spread of graphic interfaces, especially the Windows operating system . Blocks like the ET-4000 / W32 could process simple commands (e.g. "draw square") independently. Because of their main use under Windows, they were also called "Windows accelerators".

The first 3D accelerators hit the market in the mid-1990s . These graphics processors were able to perform some effects and triangle-based algorithms (such as Z-buffers , texture mapping ) and anti-aliasing . Such plug-in cards (such as the 3dfx Voodoo Graphics ) gave the computer games sector a boost in development. At the time, such applications were primarily limited by the processor.

The term GPU was first used intensively by Nvidia to market the Nvidia GeForce 256 series , which appeared in 1999 . This graphics card was the first (in the retail business) to be equipped with a T&L unit .

Due to their specialization in graphic calculations and concentration on massively parallelizable tasks, GPUs were and are usually clearly superior to CPUs in terms of their theoretical computing power. A CPU is designed for universal data processing; the individual CPU cores are also mostly optimized for fast processing of sequential tasks. The GPU, on the other hand, is characterized by a high degree of parallelization , since 3D calculations can be parallelized very well; therefore it specializes in 3D calculations, it is fast in calculations that use this functionality. The GPU still contains specialized units ("Fixed Function Units") for certain tasks (e.g. for texture filtering). A currently customary application program can i due to the lack of universality. A. Not running on a GPU. An algorithm that is limited to the capabilities of the GPU, but works very serially with relatively little data parallelism, cannot fully utilize the GPU. The relatively small caches in the GPU would lead to greater latencies in program execution, which, due to a lack of parallelization of the program, could not be compensated for by processing many tasks at the same time. The CPU is therefore faster for sequential tasks.

The performance advantage over CPUs for tasks that can be highly parallelized and the already existing SIMD properties make current GPUs interesting for scientific, graphic and / or data-intensive applications. This usage is known as GPGPU . The inclusion of the GPU has e.g. B. in the volunteer computing project Folding @ home led to an enormous increase in computing power. It was initially limited to chips from the manufacturer ATI / AMD, but in 2008 Nvidia GPUs from the GeForce 8 series were added. For graphics cards from Nvidia, CUDA exists as an API for using the GPU for calculations. This is now also used to perform physics calculations in games using PhysX . In the meantime there is the open programming platform OpenCL , with which programs for CPU and GPU can be developed equally. In addition, today's GPUs can calculate with double precision and not just with single precision .

The graphics processor takes on computationally intensive 2D and 3D computer graphics tasks and thereby relieves the main processor (CPU). The functions are controlled via software libraries such as DirectX or OpenGL . The released processor time can thus be used for other tasks.

After the major manufacturers of CPUs began around the beginning of 2005 to reduce the power consumption of their products, in some cases very significantly, especially when the load was low, there was pressure on the manufacturers of graphics processors in this regard, but they have so far done the opposite: high-end graphics cards often convert more than 50 W into heat loss even without a load , although in this state there are practically no differences in performance compared to much simpler models or onboard graphics. At the end of 2007, AMD added efficient power-saving mechanisms to its desktop graphics cards for the first time with the ATI Radeon HD 3000 series . Nvidia developed the HybridPower process , which made it possible to switch off a high-end graphics card in 2D mode and switch to the economical onboard graphics chip, although a hybrid SLI-capable motherboard was a prerequisite for this. After a relatively short time, Nvidia said goodbye to this concept. In the meantime (2009) the GPUs of both manufacturers have mastered relatively efficient energy-saving mechanisms. ( See also: Green IT )

For years, Intel has been by far the market leader in graphics processors for PCs. The main reason is the large number of office computers, which are almost exclusively equipped with graphics processors integrated on the motherboard , which are part of the chipsets mainly supplied by Intel . AMD / ATI and Nvidia share the market in the field of card-based graphics solutions that are more suitable for PC gamers .

Due to the strong competition and the associated high development costs, most manufacturers have been bought up (3dfx, 3DLabs) or are concentrating on a niche market (Matrox, XGI).