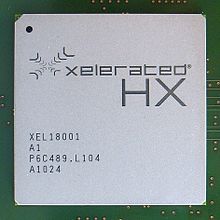 Network processors can process many packets simultaneously and independently through techniques such as massive parallel processing and pipelining . The resulting wire speed - data transmission rates be at current processors up to 200 Gbit / s duplex (state 2013).

Network processors are used both in the access network ( DSLAMs , base stations , intrusion prevention systems / firewalls , deep packet inspection ) and in the core network ( switches , routers ). Due to their programmability, they can be modified so that new services or protocols can be supported in a short time . In particular, network processors for high bit rate networks are specialized in tasks that are characteristic of layers 2 ( Ethernet ), 3 ( IP ) and 4 ( TCP ) of the OSI network model .

The most important steps in packet processing are (often performed in the order given):

Header parsing and classification
The headers of data packets are parsed and compared with known patterns ( pattern matching ). This means that packets can be classified into different protocols (e.g. VLAN- tagged Ethernet , IPv4 , IPv6 ) and handled accordingly in the course of the process. Packets for network control and monitoring are possibly sent to an external CPU for further processing (control path , "slow path" ).

Access control
Communication is restricted to certain source or destination addresses, for example, via packet filters .

Address learning
If an Ethernet packet has been received, the MAC address of the sender and the associated receiving interface (port number) are entered directly in the Source Address Table (SAT). IP routing tables, on the other hand, are normally updated indirectly via a routing protocol (e.g. BGP , OSPF ).

Table lookup
In order to find out the destination address or the next section , it is necessary to search through an address or routing table . A common search method is the longest prefix match .

Header update
Depending on the protocol, the package is modified in a suitable manner, for example by exchanging an MPLS label or reducing the time-to-live value.

Traffic management / queuing
Based on the previous routing decision, the Traffic Manager controls the traffic flow in such a way that configured Quality of Service (QoS) parameters are adhered to ( traffic shaping , traffic policing ; see also: ATM Traffic Management ). Depending on these quality of service parameters and the individual prioritization, the packets are sorted into different output queues .

In the wake of the Internet boom in the second half of the 1990s, dozens of high-tech startups emerged who wanted to build network processors for the new generation of network devices . At the beginning of 2003, 30 different chip manufacturers were already marketing network processors. With the bursting of the dotcom bubble , however, the investment activity of the network operators flagged , which led to the bankruptcy of most network processor providers. As a result, a concentration process set in, which u. a. led to the following acquisitions: Avago / LSI / Agere, Broadcom / Sandburst, Netronome / Intel, Marvell / Xelerated, PMC-Sierra / Wintegra.

The market for freely available network processors is estimated to be US $ 350 million (2012) and has grown more than 6% annually since 2005. Although network processors have found their place as an important building block for network devices, the environment for pure chip manufacturers is challenging as more and more of their large customers are moving to develop network processors themselves.

Since the individual tasks involved in processing data packets are relatively simple, most network processors use efficient RISC processors, which are again reduced in their function , which are called processor elements. Common blocks for standard processors such as caches , memory management units (MMU) and floating point units (FPU) are often missing.

Due to the fact that the program flow is strongly linked to the availability of the individual data packets, some network processors are not implemented as command-driven Von Neumann systems . Instead, the (exotic) data flow architecture is used. According to the Flynn classification, it belongs to the class of MISD architectures ( Multiple Instruction, Single Data ).

The goal of high data processing speeds can be achieved not only with fast processor clock rates but also through the basic techniques of parallelization and pipelining . The individual processor elements can each be arranged in different ways. Three typical topologies are presented as examples.

Pipeline of parallel processors
This architecture variant is similar to a pure pipeline consisting of superscalar processor elements . These can also be of different types. Example: EZChip NP.

Most network processors have dedicated, hard-coded function blocks to speed up special, computationally intensive tasks. These include engines for hash and CRC calculation, statistics, pattern matching and bandwidth management ( traffic management ). These blocks are not programmable, but can only be configured within narrow limits.

For reasons of performance, many network processors use efficient, low-level hardware functions. This in turn entails system-level programming in assembler or in the C programming language . The program creation is therefore similar to that of a microcontroller . Few of the available network processors can be programmed in ANSI C using a standard GNU toolchain.

Network processors are differentiated from communication processors and configurable ASSPs .

Communication processors process packets in the data path with comparatively lower bit rates (1–10 Gbit / s). They are therefore cheaper than network processors. Examples are the OCTEON chips from Cavium or the PowerQUICC chips from Freescale . Communication processors have integrated one or more standard ( MIPS , ARM, etc.) processor cores that enable packet processing on the upper network layers (level 4 to level 7) and control protocol processing.

In the area of ​​high data rates, ASSPs compete with network processors. They are only configurable, not programmable, and therefore less complex. Therefore, they are often used for level 2 packet processing ( Ethernet ). Examples are the StrataXGS chips from Broadcom (BCM56xxx).

Intel FWIXP422BB from the IXP series