16-bit is a redirect to this article. For further meanings see 16 bit . 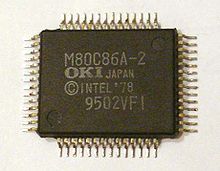 In simplified terms, 16 bits means that the processors are designed in such a way that 16  bits (i.e. 2  bytes ) can be processed simultaneously or during one cycle. This includes the external and internal design of data and address buses, the execution of the register set and the processing units. Furthermore, the instruction set usually contains an implementation of some of the common addressing types specially adapted to 16 bits .

In the C programming language , the number of bits is reflected in the size of the data types void * and int . This happened at a time when the first 32-bit systems already existed. To represent the fast processor operations, the Int type was set to 16 bits. However, since this was too short for many calculations, the long type was set to double, namely 32 bits. This is called IP16 for short.

The first widespread operating systems such as DOS worked with IP16 (small model), but segmentation was added here early on , so that 16 + 16-segmented pointers also existed, which can effectively only be stored in 32 bits. Similarly, this can be abbreviated as LP32, which was then adopted for the 32-bit architectures. Most Unix-like systems were considered to be compatible with 32-bit architectures at an early stage as the ILP32 type model, in which the Int type is also 32-bit, although programs in 16-bit architectures can run slower by half the word length.