The term microarchitecture (also µarch ) describes the implementation of an instruction set within a computer . This includes: 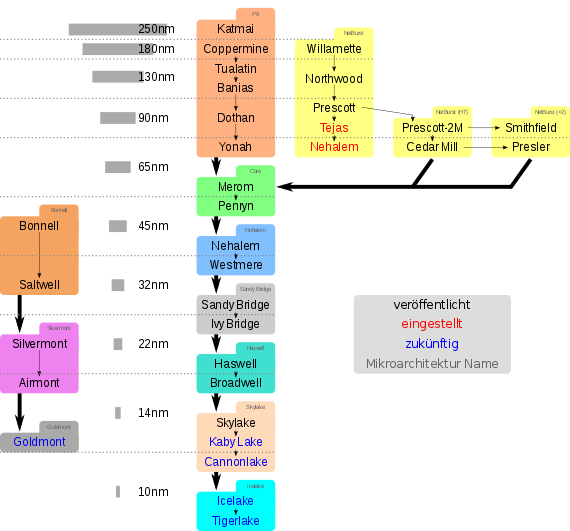 Intel microarchitectures that implement the x86 or x86_64 instruction set

Design of a micro-architecture

It is useful to use a hardware description language to design a microarchitecture .

It defines the maximum number of instructions in the instruction set that a processor core can process per clock cycle. One differentiates:

One or more caches are used to accelerate the execution of machine commands . Caches are necessary in order to be able to intercept the meanwhile 2 orders of magnitude difference in speed between processor cores (0.2 ... 0.8 ns / clock) and main memory (45 ... 70 ns) and to enable multiple cores within one CPU. Meanwhile, at least 2 cache levels (ARM) are common, with Intel / AMD 3 cache levels are common. Cache coherence protocols are also used to maintain the consistency of the caches in multi-core processors .

There are multi-core computers , multiprocessor systems and parallel computers used for simultaneous processing of several sequential programs. Modern computers also support parallel computing on one core through extensions in the instruction set architecture, such as multi media extension . However, there are limits to how far an application can be parallelized (see Amdahl's law , Gustafson's law ).