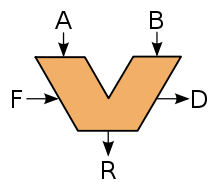 An arithmetic-logic unit ( English arithmetic logic unit , therefore often abbreviated to ALU ) is an electronic arithmetic unit that is used in processors .

The ALU calculates arithmetic and logical functions . It makes sense to perform at least the following minimal operations:

Typically, however, the following operations are also available, which can also be simulated using the upper three at the expense of computing time (in several cycles ):

All ALUs process fixed point numbers . Floating point instructions are now standard in many current CPUs. Exceptions are smaller microcontrollers that are designed for low power consumption or low manufacturing costs. The trend over the past 15 years has been to convert ALUs to vector processing (as of 2015). 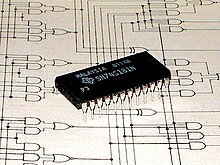 An ALU can link two binary values ​​with the same number ( s ) of digits. One speaks of n -bit ALUs. Typical values ​​for n are 8, 16, 32 and 64. Historically, the 4-bit ALU 74LS181 and the 1-bit processor MC14500B from Motorola are also worth mentioning . (However, the corresponding unit is only called LU (Logic Unit)). Terms such as 32-bit - or 64-bit - CPU come from the width of the working register of the processor architecture. Usually this width also corresponds to that of the ALU; therefore, these terms (32-bit or 64-bit CPU) indicate that similar ALUs are also used in corresponding processors. The Z80 , for example , which works with a 4-bit ALU, is an exception . 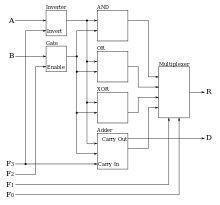 The n -bit ALU is usually composed of individual 1-bit ALUs, which each pass on a carry bit to the higher-order ALU , with which a carry is identified at the respective point. (Other methods (e.g. carry-look-ahead ) are often used to accelerate this ; see also carry-ripple adder .) To switch the interconnected 1-bit ALUs to the required function type, each 1-bit ALU has in addition to the inputs for the values ​​to be linked and the carry bit, there is also an input for a control vector (op. code); when used in a processor, these inputs are supplied jointly by the control register (operation register, OR) of the processor.

In addition to the output vector for the result, the entire n -bit ALU also has a condition vector to signal its state. When used in a processor, this condition vector is stored in its status register (also called condition code register ).

This register usually contains four status bits. The individual values ​​of the status register can be queried by machine language commands and thus influence the further course of the program (e.g. conditional jumps):

There are other flags depending on the ALU type , for example:

Parallel Logic Units (PLUs) are ALUs specially tailored for bit manipulation. You can access the data in parallel, i.e. at the same time as other arithmetic units, and are therefore connected to the main memory via a separate data path. PLUs are part of some types of signal processors that are used as high-speed controllers .