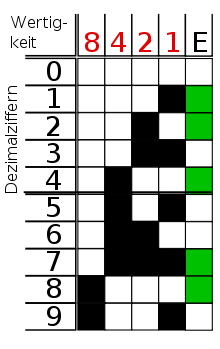 Code table - dual supplemented even parity bit (E = even = even)

The parity bit of a sequence of bits is used as a supplementary bit to supplement the number of bits (including the parity bit) assigned to 1 in the sequence as even or odd.

The " parity " of the bit string is straight ( English even ), when the number of bits occupied with 1 in the sequence is straight, otherwise odd ( English odd ).

The parity bit can be used for parity control; this is used to detect transmission errors. In this context, the bit sequence is referred to as an information word. The parity control coding appends a parity control bit, also called a parity bit, to the information word. The result, which is one bit longer than the information word, is called the code word here . This is done so that all code words to be transmitted have the same parity. Depending on whether even or odd parity is to be transmitted, the addition is made with E or O, according to the examples in the graphics. The method of error detection using parity bits is called parity check . Since it is not known where the error occurred within the code word, no error correction is possible. In addition, with a parity bit (N = 1), only an uneven number of bit errors can be determined in a code word. There are further developments for error correction such as the multidimensional parity method shown below, the Hamming code or the error correction method .

In practice, the parity bit can be generated both by hardware and software , see parity generator .

Reception of the code word with N parity bits

The receiver also adds the bits of the received code word and checks whether it has calculated the same code. N is specific to the respective data transmission method. If N = 1, then the parity check code consists of exactly one parity bit, if N = 2 it consists of 2 parity bits, etc.

With asynchronous data transmission via a serial RS-232 interface, the block size is usually 8 bits and N = 1. If a bit is corrupted (a zero into a one or a one into a zero), the parity sum of the resulting code word is odd , and the decoder recognizes that an error has occurred. However, it is not possible for the decoder to correct the error, since it is not known which bit was corrupted. The decoder recognizes a maximum of one error and can correct a maximum of zero errors, because if more than one bit has been corrupted, it may not be possible at all to recognize the error, since the parity sum can then be even. It is said that the parity control code is 1-error-detecting and 0-error-correcting .

The original form of the ASCII table consists of 128 characters, each character is uniquely defined by a sequence of seven bits. Since a computer combines eight bits into one byte , this eighth bit was often used to append a parity check bit. Today, however, this is seldom used anymore. Instead, the eighth bit is almost always used to expand the character set beyond 128 characters.

Even and odd parity

Example: In the following example, an odd parity is to be established:

If the parity bit is always 1, then one speaks of a mark parity (it contains no information); if it is always 0, it is called space parity (it represents a space).

In short, the number of all bits protected by the parity bit (including the parity bit) must be either even (for even parity) or odd (for odd parity).

The construction should be represented using a simple two-dimensional parity check for eight-bit long data words:

The resulting array comprises nine by nine data bits and can be transmitted in a suitable manner , for example serially . On the receiver side, the data block is received as nine data words and mapped as an array . If a single bit error occurs at a certain point , the parity of the row and column in question is faulty. In this way, the faulty bit can be clearly localized and converted into the correct state by inversion.

With this method, all individual bit errors per block can be clearly identified and corrected. If several bit errors occur in a block, error correction is no longer possible in all cases. However, faulty blocks can still be recognized as faulty under certain circumstances, which in these methods includes, for example, all double bit errors per block.

The parity check is also used in an extended form with various block codes such as the Hamming code or the low-density parity check code, both for error detection and for error correction. As shown above, these codes are based on a user data block of fixed length, to which, however, not just one parity bit, but several parity bits are appended in order to then result in the actual code word. In order to enable not only error detection but also error correction with those parity bits, different positions (bits) of the useful data block are included in the individual parity bits per block. The selection of these positions per parity bit must be made according to certain rules and certain criteria such as the linear independence of the individual parity positions must be guaranteed in order to enable error correction. Due to these code constructions, there are possibilities to determine the exact bit position (s) of the error in the user data block in the event of transmission errors and to correct the affected incorrect binary digits.

The so-called Turbo Product Codes (TPC) represent an extension of these block codes, which are based on the multi-digit parity check , which include an extended parity block code such as the Hamming code with the above-mentioned multi-dimensional parity control in an iterative decoding between rows and columns of the two-dimensional data block connects.