Fig. 1: Example of an EA describing a door

A state can contain information about the past, since the system has reached it on its previous way. I.e. to a certain extent it reflects the changes in the input from the system start up to the current point in time.

A state transition is a transition from the current state to a new (different) state. This transition occurs when the specified logical conditions / "inputs" are present that must be met in order to enable the transition.

An action is the "issuance" of the EA, which occurs in a certain situation. There are four types of actions:

The definition of EA was originally introduced in automaton theory and later adopted in computer technology.

State machines are mainly used in the development of digital circuits, modeling of application behavior (controls), in general in software technology as well as word and speech recognition.

In general, there are two groups of EA: acceptors and transducers.

Fig. 2: EA of the type acceptor: recognizes the word "good"

They accept and recognize the input and signal the result to the outside world through their state. Usually symbols (letters) are used as input. The example in Figure 2 shows an EA that accepts the word “good”. Acceptors are mainly used in word and speech recognition.

Transductors generate outputs depending on the state and input with the help of actions. They are mainly used for control tasks, a basic distinction being made between two types: 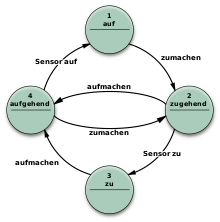 Moore machine
In the Moore model , only entry actions are used; i.e. the output (Γ) only depends on the state (S) (S → Γ). Compared to the Mealy model, the behavior of a Moore machine is simpler and easier to understand. The example in Figure 3 shows a Moore machine that controls an elevator door. The state machine knows two commands, "open" and "close", which can be entered by a user. The entry action (E :) in the "Open" state starts a motor that opens the door, and the entry action in the "Close" state starts the motor in the opposite direction. The input actions in the "Open" and "Close" states stop the motor. They also signal the situation to the outside world (e.g. to other EA).

Mealy machine
In the Mealy model , input actions are used; i.e., the output (Γ) depends on the state (S) and the input (Σ) (S × Σ → Γ). The use of Mealy machines often leads to a reduction in the number of states to be considered. This makes the function of the EA more complex and often more difficult to understand. The example in Figure 4 shows a Mealy EA that behaves in the same way as the EA in the Moore example. There are two input actions (I :): “start the motor to close the door when the input is 'close'” and “start the motor in the opposite direction to open the door when the input is 'open' ".

If the time behavior can be disregarded, Moore and Mealy machines are equivalent. Under this condition, one can be converted into the other; mixed models are often used in practice. In the area of ​​synchronous system design ( digital electronics ), on the other hand, there are important differences that must not be ignored. These concern both the different number of states and the time characteristics of the control signals generated.

An EA that consists of only one state is called a combinatorial EA. He only uses input actions.

The logic of the EA

The next state and the output of the EA is a function of the input and the current state. Figure 5 shows the logic flow.

There are different definitions depending on the type of DEA . An acceptor is a 5-tuple (Q, s, Σ, F, δ), where:

An EA is optimized by finding the state machine with the smallest number of states that fulfills the same function. This problem can be solved with the help of coloring algorithms, for example .

A UIO sequence (Unique-Input-Output-Sequence) is a sequence of inputs to use the outputs to determine the state from which you started. Such a sequence does not always exist, the problem of finding one is PSPACE -complete.

In digital circuits, EA are built with the help of programmable logic controllers, logic gates, flip-flops or relays. A hardware implementation normally requires a register to store the state variable, a logic unit that determines the state transitions, a second logic unit that is responsible for the output, and a clock or a delay element to switch / differentiate between the previous, current and subsequent state to be able to.

In software development, the following concepts are mostly used to model or implement applications with the help of state machines:

All digital computers that exist in the real world have a finite memory size and can therefore only accept a finite (albeit very high) number of digital switching states. They can therefore be viewed as a subset of the finite automata. However, for theoretical considerations it is often more useful to consider them as a subset of more powerful machine models such as the Turing machine .

The general rules for drawing a state transition diagram are as follows: