Example of a spatiotemporal pattern that develops in a cellular automaton

A cellular machine is defined by the following parameters:

The cellular space has a certain dimensionality , it is usually one or two-dimensional, but can also be higher-dimensional. The appearance of a cellular automaton is described by a global configuration , which is a mapping from the cellular space into the state set, that is, a state is assigned to each cell of the automaton. The transition of a cell from one state ( local configuration ) to the next is defined by state transition rules, which can be deterministic or stochastic. The state transitions take place for all cells according to the same transfer function and simultaneously. The cell states can be discrete like the time steps. As a rule, the number of possible states is small: only a few state values ​​are sufficient to simulate even highly complex systems.

Cellular automata were introduced by Stanislaw Ulam in Los Alamos around 1940 . John von Neumann , a colleague of Ulam at the time, took up the idea and expanded it into a universal calculation model. He presented a cellular automaton with 29 states that could reproduce a given pattern again and again. He was the first to describe a cellular automaton that is universal in terms of calculation and design. According to von Neumann, it is suitable for problems of biological organization, self-reproduction and the evolution of complexity. The cellular automat is thus also an important basis for artificial life .

Up to the 1960s, which were analog computers to digital computers superior to some questions. An analog cellular automaton for simulation of groundwater flow is described in the article analog computer accurately.

In 1969 Konrad Zuse published his book “Computing Space”, in which he assumes that the laws of nature follow discrete rules and that everything that happens in the universe is the result of the work of a gigantic cellular automaton.

In 1983 Stephen Wolfram published a series of foundational papers on cellular automata and in 2002 the book A New Kind of Science . 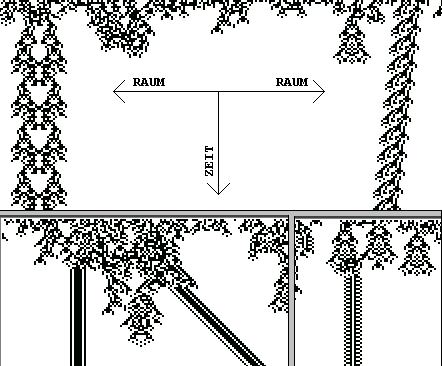 Computer scientist Stephen Wolframs cellular automaton is a particularly beautiful and simple model universe . It consists of only one space and one time dimension. In the picture the space dimension is drawn horizontally and the time dimension runs vertically downwards. (The picture contains three different sections of the picture.) The spatial dimension is finite, but unlimited, because its right and left ends are topologically connected.

Although, in contrast to computer games, there is no action at a distance and no control authority whatsoever, this model universe is developing into astonishing complexity. After the Big Bang, there is an elimination phase, just like in the real universe. After that, short-lived but orderly structures emerge, which at some point disappear. However, some of the ordered structures are long-term stable, some of them oscillate, others are dimensionally stable over time. Both the oscillating and the dimensionally stable structures exist in both stationary and movable types. The maximum exchange speed of this universe can only be two units of space per unit of time. When collisions occur between the stable moving objects, chaos sets in again and another phase of elimination takes place.

If one simplifies even further and only takes into account the state of the element itself, only the right and left neighboring elements, there are exactly 8 rule elements. An example is given below. There are a total of 256 such rules. Even among these even simpler rules, some show astonishing complexity. One of the most interesting is the "rule 110":

In A New Kind of Science and in a number of papers from the mid-1980s, Stephen Wolfram defines four classes into which cellular automata (more precisely: the rules they work through) can be divided according to their behavior. Previous authors simply tried to identify the type of pattern for certain regulations.

According to the effort, these were the classes:

Wolfram suggested that not all class 4 cellular automata are capable of performing universal computations. The universality has been confirmed especially for Rule 110 and Conway's Game of Life .

This short script, written in the programming language Python , can simulate all 256 one-dimensional cellular automata and generates an image in the graphic format Portable Graymap (.pgm) as output . When calling up, the desired rule number, 0 to 255, must be entered.