A Turing machine is an important computer model in theoretical computer science . A Turing machine models the functioning of a computer in a particularly simple and mathematically easy to analyze way. It is named after the mathematician Alan Turing , who introduced it in 1936.

A Turing machine represents an algorithm or a program. A calculation consists of the step-by-step manipulation of symbols or characters, which are written to a memory tape according to certain rules and also read from there. Strings of these symbols can be interpreted in different ways, including numbers . A Turing machine thus describes a function that maps character strings that are initially on the tape to character strings that are on the tape after "processing" by the machine. A function that can be calculated using a Turing machine is called Turing-calculable or simply calculable . 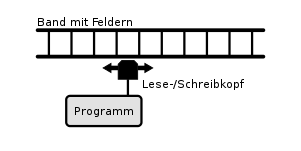 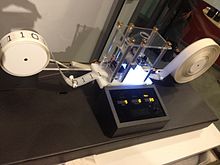 Model of a Turing machine

In addition to calculating functions, the Turing machine - like many other automata - is also used for decision-making problems, i.e. for questions that can be answered with “yes” or “no”. Certain final states are defined as "accepting", others as "not accepting". The input is accepted exactly when the Turing machine ends in an accepting final state.

The mathematician Alan Turing presented the Turing machine in 1936 as part of the Hilbert program formulated by David Hilbert in 1920 specifically for solving the so-called decision problem in the publication On Computable Numbers, with an Application to the Decision Problem.

The decision problem posed by Hilbert asks whether a given formula of predicate logic is generally valid, i.e. whether the formula is true under any interpretation . Hilbert asked whether this problem can be solved automatically. The method that determines for a predicate logic formula whether it is generally valid should therefore be able to be carried out by a “machine”. Before the invention of the computer, this meant that a person would perform a calculation according to fixed rules - an algorithm.

With his model, Turing defined the terms algorithm and predictability as formal, mathematical terms. In general, it is assumed that Turing predictability meets the intuitive understanding of predictability; this statement is known as the Church-Turing thesis . You have a strong plausibility, u. a. through the mathematical equivalence of the concept of Turing computability with other computability concepts (such as expressibility in the lambda calculus or as a partially recursive function , as well as computability using register machines , which are modeled on computers that are structurally used today). The special thing about a Turing machine is its structural simplicity. It only requires three operations (reading, writing and moving the read / write head) to simulate all the operations of conventional computer programs. In the context of theoretical computer science, it is therefore particularly suitable for proving the properties of formal problems as they are considered by the complexity and predictability theory .

The complexity (such as runtime and memory complexity ) of algorithms is defined in relation to certain machine models. On Turing machines, for example, the asymptotic number of state transitions depending on the input length is a possible runtime complexity measure for an algorithm. Other models often define complexity measures that define random access to each memory cell or the execution of arithmetic operations as individual steps. These dimensions are particularly well suited to a limited extent (small amounts of data or small numbers) for estimating the runtime of many algorithms on real computers and are accordingly often encountered (especially unspecified). Because of the sequential structure of Turing machines, the runtime complexity in terms of the asymptotic number of state transitions is higher for many algorithms compared to definitions for register machines. The complexity theory deals with the question of which problems algorithms with which complexity exist, for example in which complexity classes there are problems or not. Unless polynomial factors in the input length are important when examining the runtime complexity, Turing machines can be used here quite generally, since the simulation of many register machines in many dimensions of complexity only means additional polynomial effort.

Not all mathematical functions can be calculated by a Turing machine, even if you limit yourself to well-defined functions with finite input and output (for example, functions between any real numbers cannot be represented by functions with finite input and output, since the real numbers are uncountable and, from a formal point of view, there are functions that cannot be specified at all). Turing was able to show that a Turing machine cannot solve Hilbert's decision problem, any more than can the stopping problem .

According to Rice's theorem, any non-trivial property of a program in a powerful programming language is also undecidable . Even if you limit yourself to terminating Turing machines, it is undecidable whether two terminating Turing machines accept the same language. The computability theory deals with the question of which problems are computable or not computable by which machine models.

Systems, computers and programming languages that could emulate a Turing machine by hiding the limited memory and associated properties are called Turing complete .

The partial transfer function returns to a state and a read tape symbol (i) the next state, (ii) a tape symbol that is written in the current field, and (iii) the direction of movement of the read / write head (L .. one field after left, N .. do not move, R .. one space to the right). Since the calculation stops in any case in accepting final states, these are excluded from the definition of the transfer function.

Configuration of a Turing machine in the state . The read / write head is located above the symbol highlighted in gray . If you use the blank symbol of the Turing machine, this configuration corresponds to the triple

The configuration of a Turing machine describes not only its own current state , but also the position of the read / write head and the symbols currently on the tape. The symbols are located in a finite area of ​​the band which is surrounded by an infinite number of empty symbols. It is therefore sufficient to consider this finite area.

Formally, a configuration consists of the current status , a finite word that contains the content of the tape to the left of the read / write head and a finite word that contains the contents of the tape from the current position of the read / write head. A configuration is thus a triple with , , , wherein the band through is given and the read-write head on the first character of stands.

Writes the transfer function for a state and the input symbol , for example, before that is written, the read-write head moves to the left and the successor state is, this means the following step: .

The Turing machine performs a computation by stepwise converting an input into an output. Input, output and intermediate results are stored on the infinitely long tape.

The Turing machine has now gone through one step of its work cycle and is ready for another.

Since the transition function is partial, it does not have to define a transition for every state and every input character. For example, the final state has no subsequent state for any input character. If the Turing machine reaches an end state , the Turing machine cannot therefore carry out any further actions and the calculation is ended. The output is then the content of the volume.

The following deterministic single-tape Turing machine expects a sequence of ones as input on the tape. It doubles the number of ones, leaving a blank symbol in the middle. For example, “11” becomes “11011”. The read / write head is initially on the first one. The initial state is the end state . The zero stands for the empty field and the tape consists of empty fields except for the ones written on it.

The transfer function as a graph

runs through the following states in the example mentioned above, i.e. when entering "11", whereby the current head position is printed in bold:

The Turing machine described is applied to input “11”.

Equivalent variants of the Turing machine

There are also extensions that are also equivalent to Turing machines in terms of predictability. Even in terms of complexity theory , the differences between many of the variants are largely negligible. Overall, a very large number of variants lead to no more than polynomial differences in effort (effort here means any resource) and are therefore negligible for many complexity-theoretical investigations. Depending on the objectives of the respective analysis, the model used is adapted so that the analysis can be carried out as easily as possible. However, there are also equivalent extensions of the Turing machine, such as non-deterministic Turing machines and certain oracle-Turing machines, with regard to the predictability, but not the complexity (in the sense of “up to polynomial additional effort”) .

Transfer function δ as an integer

In his original article on Hilbert's decision problem, Alan Turing describes a way of defining the transfer function, which is usually displayed graphically or written down in a table, using a single number. To do this, he first converts the table into a normal form and then replaces the individual states, letters and instructions with numbers, which are then combined into a long number.

Formally, a universal Turing machine is a machine that reads input . The word here is a sufficiently simple description of a machine that calculates the output for a specific function with input . is a separator between program description and input. simulates the behavior of with the help of the function description and the input . The index in indicates that there is not just one universal Turing machine. So could z. B. and understand different words. The word must be coded in a language that she understands.

Chris Langton's ant is a Turing machine with a two-dimensional band (actually a surface) and very simple rules, the content of the band as a two-dimensional image initially looks chaotic, but after more than 10,000 steps it develops a certain visible structure.

Machine models based on Turing machines

An alternating Turing machine is a nondeterministic Turing machine that extends the rules for accepting an input. A distinction is made between existential and universal states of the machine. The former accept input if there is a possible computation that will accept, while the second states accept input only if all possible computations are accepted.

Probabilistic Turing machines allow two (or, equivalently, finitely many) possible transitions for every state and every input, one of which is selected at random during execution - to put it intuitively - and serve the theoretical description of randomized algorithms .

Quantum Turing machines serve in quantum informatics as abstract machine models for the theoretical description of the possibilities of quantum computers . In this context, quantum circuits are another popular model.

In order to represent interactive models (in the sense of “models with memory”) by a Turing machine, it is necessary to expand them to include this memory.

According to the definition, a persistent Turing machine (PTM) is a nondeterministic 3-band Turing machine with an input, a working and an output band. The input is processed on the work belt, and only after it has been completely processed do the results return to the "environment" on the output belt. A new input from the environment can then be processed. The contents of the work volume are retained as a “memory” between two work steps.

The Zeno machine is a Turing machine that calculates faster and faster in a geometric series. It represents a fictional model beyond the Turing predictability.

Relationship between a Turing machine and a formal language

A language is called recursively enumerable or semi-decidable (type 0 of the Chomsky hierarchy ) if and only if there is a Turing machine that accepts it.

A language is called recursive or decidable if and only if there is a Turing machine that decides.