This article describes the decidability of a mathematical property. For other forms of decidability see Decision .

Originally meant specifically for the validity of formulas, the term is now used for any properties on countable sets. The concept of the algorithm presupposes a calculation model ; Unless otherwise stated, the Turing machines or an equivalent model are meant. 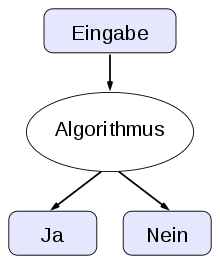 Structure of a decision problem

This definition assumes that all elements of the set can be represented in the computer. The amount must be godelizable . In theory, for easier comparison, one assumes direct or presupposes. In the latter case, the problem has been presented as the word problem of a formal language .

Undecidability must not be confused with the practical or fundamental impossibility of assigning a truth value to a statement . In detail, the following terms are involved:

Decidability is a property of predicates , not of statements. The predicate is assumed to be well-defined , so it delivers a defined truth value for each element of the set. Undecidability only means that the predicate cannot be calculated by an algorithm.

The decision problem is "the problem of determining the generality of expressions". "It is a matter of specifying a general procedure for a given deductive theory which allows us to decide whether a given sentence, formulated in the terms of the theory, can be proven within the theory or not."

The decisive factor is whether there is a purely mechanical process, an algorithm , that clarifies in a finite number of steps whether an expression, a formula, is valid in a system or not.

According to Frege , Whitehead and Russell , the "central question of logicians and mathematicians was: Is there an algorithm [...] that determines from any formula of a logical calculus whether it follows from certain given axioms or not (the so-called decision problem)?"

Kurt Gödel published a work on the decision problem in 1931; The British Alan Turing (1912–1954) reformulated Gödel's results from 1931 in his work, On Computable Numbers, with an Application to the “Decision Problem” (May 28, 1936), which was fundamental for this branch of mathematics . He replaced Gödel's universal, arithmetic-based formal language with simple, formal devices that became known as the Turing machine .

The logician Heinrich Scholz (1884–1956) requested (and received) a copy of this work from Turing in 1936. On the basis of this work, Scholz held (according to Achim Clausing) "the world's first seminar on computer science".

The halt problem describes the question of whether an algorithm terminates with an input . Alan Turing demonstrated the undecidability of this question. More formally, the holding problem is the property of pairs of algorithm and inputs that the algorithm terminates for the input , that is, calculates only finitely long. The even holding problem, namely the property of algorithms to finally hold for every input, is also undecidable.

The stopping problem for many weaker calculation models, such as linearly constrained Turing machines , can, however, be decided.

The validity in the propositional calculus is decidable. The complement to this is known, the satisfiability problem of propositional logic . One decision-making process is the truth table method .

The special decision problem for predicate logic was posed by David Hilbert in 1928 (see Hilbert program ). Alan Turing and Alonzo Church found the problem in 1936 to be unsolvable (see holding problem ).

Example: has the solution because it applies .

The Postsche correspondence problem , that is the property of problem cases to have a solution that is undecidable.

According to Toby Cubitt, David Perez-Garcia, Michael Wolf, the following problem from quantum mechanical many-body theory is undecidable. The Hamilton function of a quantum mechanical many-body problem is given. Does the spectrum have a gap from the first excited state to the ground state or not? The authors explicitly constructed a family of quantum spin systems on a two-dimensional lattice with translation-invariant closest neighbor interaction, for which the question of the spectral gap is undecidable. They combined the complexity theory of Hamilton operators with techniques of aperiodic tiling and translated the problem into a holding problem of a Turing machine. Other low-energy properties of the system are also undecidable.