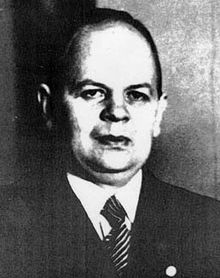 Ackermann studied mathematics, physics and philosophy at the University of Göttingen from 1914 to 1924, with interruptions through participation in the First World War . He was a student of David Hilbert in Göttingen and became famous for the Ackermann function named after him , an example of a recursive function that is not primitive-recursive .

In 1924 he received his doctorate from Hilbert with the thesis "Justification of the 'tertium non datur' using Hilbert's theory of consistency". He then received a three-year research grant that enabled him to stay in Cambridge .

In 1925 he discovered the Ackermann function named after him , which is important for theoretical computer science today.

In 1928 he completed his preparatory service for teaching at secondary schools in Göttingen . He then worked for a year at what was then the Konrad-Schlaun-Oberrealschule in Münster . From 1929 to 1948 he taught at the Arnoldinum grammar school in Burgsteinfurt , and in 1935 he was promoted to the faculty there. In 1948 he returned to his hometown Lüdenscheid , where he taught at the Geschwister-Scholl-Gymnasium until 1961 . In 1957, he was promoted to senior lecturer in mathematics.

He was a corresponding member of the Academy of Sciences in Göttingen and honorary professor at the Westphalian Wilhelms University in Münster . In 1962 Ackermann was one of the seven founding members of the German Association for Mathematical Logic and for Foundations of Exact Sciences (DVMLG).

Together with David Hilbert, he wrote the book Basics of Theoretical Logic in 1928 . In view of Hilbert's advanced age at the time, he was its main author. He also became known through work on the decision problem of predicate logic , the consistency of elementary number theory and set theory . In particular, he created the Ackermann set theory in 1955 .

He died unexpectedly at the age of 66 on December 24, 1962. Three days earlier, he was giving a lecture on basic mathematical research at the Westphalian Wilhelms University in Münster. In Münster, he gave regular lectures on mathematical logic and the fundamentals of mathematics at the chair headed by Hans Hermes .

Constance Reid gives an answer to the question of why Ackermann did not embark on a university career :

“Hilbert was very opposed to marriage for young scientists anyway. [...] Later, when Wilhelm Ackermann, with whom he had worked and collaborated on a book, married, Hilbert was very angry. He refused to do anything more to further Ackermann's career. "

Orally the following statement is passed down from Hilbert:

“Oh, that's wonderful. This is good news for me. Because if this man is so crazy that he gets married and even has a child, I am freed from any obligation to do something for him. "

Ackermann taught 26 hours a week at the Arnoldinum in the summer of 1929 and was at times the only math teacher there. In the Arnoldinum's obituary it says:

"Senior Student Councilor Dr. Ackermann was not only a widely respected and popular teacher, he was also a world-famous scientist. "

During his studies in Göttingen, he met Fritz Lettenmeyer (1891–1953) who, with interruptions, continued to study for four semesters in Göttingen from 1920–1922. The passionate alpinist Lettenmeyer made the ridge crossing Huderbankspitze – Kaiserkopf – Hochglück with Ackermann with an overnight stay in the Lamsenjochhütte .