Paradox is a redirect to this article. Further meanings are listed under Paradox (disambiguation) . 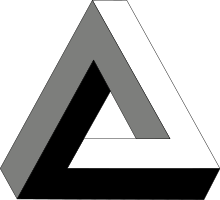 The Penrose triangle gives the impression that it is a closed three-dimensional structure made up of three right angles, which is impossible in Euclidean geometry.

A paradox ( neuter ; plural paradox ; also the paradox or the paradox , plural paradoxes or paradoxes ; from the ancient Greek adjective παράδοξος parádoxos "contrary to expectation, contrary to the common opinion, unexpected, unbelievable") is a finding, a statement or appearance that contradicts what is generally expected, prevailing opinion or the like in an unexpected way or leads to a contradiction in terms of the usual understanding of the objects or terms concerned . The analysis of paradoxes can lead to a deeper understanding of the objects or concepts or situations in question, which in the best case resolves the contradiction. Individual paradoxes can be found in the list of paradoxes .

It is well known that Pinocchio's nose grows precisely when he is lying. But what happens when he says “My nose is growing right now”?

In philosophy, paradoxes, like sophismata, have been discussed since ancient times. Sometimes they were used to support or refute certain positions in cosmology or theology and were the subject of logical investigations from an early stage . The paradoxes of Zeno of Elea , or the omnipotence paradox, are known . Up to the modern age, paradoxes of self-reference were of particular interest: These include the liar's paradox , the paradox of Epimenides and the well-known barber's paradox - finally the set paradox evoked by Russell's antinomy and the Grelling-Nelson antinomy . Paradoxes, once formulated, also present an important challenge in modern philosophy of science, since they make clear demands on theories and paradigms that have not previously been met, such as Hempel's paradox or Goodman's new induction riddle .

As an aesthetic motif in science

A consideration of paradoxes in the various sciences shows that recognizing and solving paradoxes can be an important motive of scientific work. The mathematician Roger Penrose put it this way: “I find paradoxes extremely attractive. You see something like this and try to understand how on earth could that make sense ?! Even that is paradoxical: I like paradoxes a lot, and at the same time I want to get rid of them! ”( Quote from Gábor Paál :)

The scientific and aesthetic appeal of paradoxes is also evident in the fact that artists like MC Escher were inspired by the paradoxes in mathematics and physics. At times there was a close exchange between him and Penrose, who, as a mathematician, dealt with geometrically "impossible" forms. Among other things, the famous Penrose triangle comes from him . Escher, in turn, implemented this in his graphics. For other scientists and thinkers such as Bertrand Russell , Gregory Bateson or Arthur Koestler , paradoxes in their different facets were a central theme.

A distinction is made between different forms of paradox:

Common to all Paradoxa the contradiction between that on the one hand and the expectations and ratings on the other hand, from the familiar thought heuristics , prejudices commonplace , ambiguities or limited prospects as an everyday opinion ( Doxa yield). Apparent contradictions, which can be completely resolved by a more detailed analysis, therefore seem paradoxical at first or have been considered insoluble paradoxes or aporias in the course of intellectual history . Solvable paradoxes are true statements, the investigation of which - for example in the context of a thought experiment - can lead to important advances in knowledge in science , philosophy and mathematics , but which are unexpected or surprising to everyday understanding. The contradiction here often only exists between the expected and the actual solution. An example from mathematics is the goat problem , which can be solved logically and mathematically exactly, but contradicts the expectations of many people.

By Willard Van Orman Quine merely intuition, prevailing opinion or expectation can be contradictory, but correct responses to a problem of on fallacies paradoxes and those based actually a self- contradictory result of the conclusion succeeding represent that a paradox or a (hidden legally) Reference inconsistent definition or incorrect rule assumption.

Delimitation according to Penrose

The British mathematician and physicist Roger Penrose proposed the distinction between paradoxes and puzzles for physics . Puzzles are “amazing, but experimentally directly verifiable quantum truths about the world in which we live.” Among other things, this includes the so-called Einstein-Podolsky-Rosen paradox , which is not a real contradiction, but rather an unrepresentative one but is verifiable physical truth. The paradoxes or "X-puzzles", as Penrose also calls them, are also a "true component of this world in terms of quantum physics, but appear so implausible and paradoxical that we are reluctant to accept them as" really "true". The most famous X-puzzle is the paradox of Schrödinger's cat .

In psychology, strong contradictions in the demands on individual thinking and behavior are examined as paradoxes. This includes the so-called “be-spontaneous paradox”, as it is often expressed in relationships: the expectation that my counterpart should kindly make his decisions freely and independently - and that is precisely how he would prove his lack of independence. The wish “Tell me spontaneously from time to time that you love me!” Can no longer be fulfilled as soon as it is expressed.

Another example of psychological paradoxes are double bind communication structures .

In The Life of Brian by Monty Python , Brian is held against his will for the Messiah and in the "balcony scene" calls on his followers to be individuals: