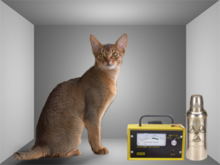 Schrödinger's cat: In a box there is a cat, a radioactive preparation, a detector for the radiation generated during the decay and a lethal amount of poison that is released when the detector is activated

The thought experiment is based on the fact that whenever a system can assume two different states according to the Copenhagen interpretation, the coherent superposition of the two states also represents a possible state. Only when an observation or measurement is carried out with which one can differentiate between the two original states does the system assume one of the two. Based on the thought experiment with a macroscopic system, a quantum mechanical system is also referred to as a cat state if one can distinguish the two states in such a superposition through a measurement.

At the time of Schrödinger's publication, such quantum effects were only known in the microscopic range, the applicability of quantum mechanics to complex macroscopic processes, e.g. B. on the measurement process itself, however, was unclear. Schrödinger's thought experiment serves to illustrate the conceptual difficulties associated with applying the concept of the quantum state to macroscopic systems. Today, the quantum theory of macroscopic systems is an extensively studied branch of physics.

Without interaction with the outside world, Schrödinger's cat is, described quantum mechanically, in a superimposed state. She is both alive and dead.

In the thought experiment there is a cat and an unstable atomic nucleus in a closed box , which will decay with a certain probability within a certain period of time. The decay triggers the release of poison gas by means of a Geiger counter , which kills the cat.

- Schrödinger now that argues if the quantum physics not only the nucleus, but the cat would have to fall into a state of superposition - would also apply to macroscopic systems. This overlay would not stop until someone opened the box and checked the cat's condition. This represents a measurement that determines either the result "dead" or "alive". By then the cat would be alive and dead at the same time . This conclusion seems paradoxical .

Schrödinger himself formulated this in 1935 in his essay The Present Situation in Quantum Mechanics. § 5. Are the variables really blurred?

“[...] You can also construct completely burlesque cases. A cat is locked in a steel chamber, together with the following infernal machine (which must be secured against direct access by the cat): in a Geiger counter tube there is a tiny amount of radioactive substance, so little that in the course of an hour perhaps one of the atoms is disintegrates, but just as likely none; if it happens, the counter responds and activates a little hammer via a relay, which smashes a small flask with hydrogen cyanide. If you have left this whole system to its own devices for an hour, you will tell yourself that the cat is still alive if no atom has decayed in the meantime. The first atomic disintegration would have poisoned them. The psi function of the whole system would express this in such a way that the living and the dead cat ( svv ) are mixed or smeared in equal parts in it. The typical thing about such cases is that an indeterminacy originally confined to the atomic domain is converted into a sensory indeterminacy which can then be decided by direct observation. This prevents us from so naively accepting a “fuzzy model” as an image of reality. In itself it contained nothing unclear or contradictory. There is a difference between a blurred or out of focus photograph and a picture of clouds and wisps of fog. "

According to the decoherence theory, the situation described by Schrödinger does not occur in reality, since in macroscopic systems there is always a suppression of the coherence properties of the quantum mechanical state. The mutual exchange of a few photons of thermal radiation between the surroundings, the wall of the box and the cat would lead to complete decoherence of the macroscopic states in a very short time, due to internal thermal interactions. This results in an effective collapse of the wave function in the sense of the Copenhagen interpretation after an extremely short time . The decoherence theory takes seriously the fact that the poisoning apparatus and the cat are macroscopic objects that do not react in an irreversible way to the “measuring process” by opening the box, but directly to the first immediate effects of atomic decay.

Despite the influence of decoherence, the thought experiment can be checked with real experiments. The interaction with the environment must be completely shielded. Such an isolation can be achieved very well with photons as examination objects, since photons themselves are not influenced by other photons and are therefore little affected by the decoherence. In the case of solid matter, isolation is much more difficult and has so far only been possible with very small objects. For example, in an experiment with fullerenes it was shown that such a single molecule consisting of 60 carbon atoms can simultaneously take different paths through different gaps in an obstacle. The experimental conditions that adequately protected against decoherence were a high vacuum, darkness and a very short period of time between generation and verification of the overlay. In quantum computers, attempts are made to suppress the decoherence of electrons by restricting their degrees of freedom with the help of very low temperatures and superconductivity. The superimposed states are then used to carry out parallel arithmetic operations.

These experiments confirm the assumption that the laws of quantum mechanics also apply to macroscopic systems.

Independent of the decoherence theory, the processes in the hypothetical, perfectly closed box are interpreted very differently in the various schools and interpretations of quantum mechanics.

Copenhagen interpretation: With radioactive decay, the state branches out. According to a random principle, however, one of the two branches collapses again immediately after the coherence between the states z. B. has decayed far enough due to a measurement.

In the Copenhagen interpretation of quantum mechanics, the moment the measurement is made, the wave function of the measured system collapses . When opening the room and observing (measuring) the atomic nucleus, which was previously in the state of superposition, jumps into one of the eigenstates belonging to this measuring apparatus. It is only during the measurement (here by an external observer) that it is decided whether the cat is dead or alive. Before the measurement, only a probability statement can be made about the condition of the cat. The measuring process itself is described as in classical physics .

Later interpreters of the Copenhagen Interpretation such as Carl Friedrich von Weizsäcker recognize that the macroscopic response of the “infernal machine” results in the creation of an irreversible “document” about the atomic decay, in other words, a measurement has taken place. The wave function collapses without further human intervention; the cat is either alive or dead.

With the 50 percent probabilities for the two possible eigen-states, the wave function does not actually describe the system before the measurement, but rather the incomplete knowledge of the system. Fröhner has shown that the quantum mechanical probabilities can be understood as Bayesian probabilities without contradiction . These change as the measurement changes the observer's level of information. No time is needed for this; what collapses ("collapses") is nothing physical, just the observer's lack of information. Correspondingly, Heisenberg and Styer expressed their views on this in 1960 in a discussion by letter (see quote from Fröhner).

Many-worlds interpretation: The entire universe branches out here when it decays. According to the theory, both branches remain as equal realities and from now on develop independently of each other.

The many-worlds interpretation goes back to the physicist Hugh Everett . It is not a new or additional theory, but an alternative interpretation of quantum mechanics. The many-worlds interpretation assigns physical reality to all possible states (ie here "cat dead" and "cat alive"). Then there is actually a universe in which the atom has decayed and one in which the atom has not yet decayed. In the first universe we open the box and find the cat dead, in the second universe the cat is alive. Our memories and what we perceive as reality then correspond to only one of innumerable possible (and equally realized) stories of the universe.

Representatives of the ensemble theory would relate the thought experiment to a set of systems (i.e. several boxes with cats): After a certain time interval, half of all cats are dead and the other half are alive. This is where the empirical law of large numbers applies . H. the more often this experiment is carried out, the more certain it is that the relative frequency approaches the theoretical probability.

Bohmian Mechanics: This theory also takes both branches into account. However, a deterministic mechanism marks one of the branches as reality, while all other branches as so-called pilot waves only scout out the possible quantum interference.

Bohm's mechanics is an alternative formulation of quantum mechanics. It adds an additional equation of motion to quantum mechanics, which determines the location of all particles at all times. This makes the description deterministic. Bohm's mechanics determine exactly at all times whether the cat is dead or alive. However, one cannot accurately measure the initial state of the system without perturbing the system. Therefore one can only give probabilities for the result for the case of a dead or a living cat.

In a more general sense, in quantum mechanics, a superposition of two coherent states that are sufficiently different and similar to classical states is called a cat state. To prepare for such a condition, it is necessary to shield the system from the environment. Typical experimental realizations are spin orientations or particle positions. The first mesoscopic cat states were created with electron beams and beam splitters, in which there was a superposition of the states that an electron is in one or the other partial beam. In the mid-1990s it was possible to generate a mesoscopic cat state for a single atom with respect to its position. Based on this, larger systems were created from individual atoms, in which, for example, with six atoms the superposition of the two states, in which all atoms spin-up. or all atoms spin down. were examined. This formulation was proposed by David Bohm , who formulated the spin as an observable in 1935 in a thought experiment on the Einstein-Podolsky-Rosen paradox .

Cat condition in the quantum computer

A concrete special case is the cat state as a state in a register of a quantum computer , which consists of the superposition of the two states in which all qubits are | 0⟩ or all | 1⟩. In the Bra-Ket notation, it is written as proportional to | 00 ... 0⟩ + | 11 ... 1⟩.

Wigner function of a quantum optical cat state with α = 2.5. In addition to the two mounds for and , the cat condition contains an interference structure in the middle.

In quantum optics , a cat state is defined as the coherent superposition of two specific coherent states with opposite phases:

are defined as coherent states in the number base ( Fock state ). If you add the two states, the cat state only contains even Fock state terms:

As a result of this trait, the above condition is often referred to as the straight cat condition . Alternatively, one can have an odd cat condition

which only contains odd Fock states