Structural model of C 60 , rotating - as shown as a gas molecule in flight 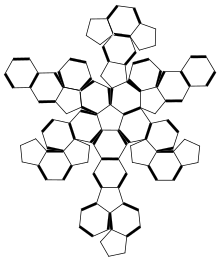 Network of the C 60 fullerene

As fullerenes (singular: the fullerene ) are hollow, closed molecules (often with high symmetry , eg. I h symmetry for C 60 ) of carbon atoms , that align in the pentagons and hexagons, respectively. In addition to diamond , graphite , Lonsdaleite , Chaoite , carbon nanotubes and graphene, they represent another modification of the chemical element carbon.

The first publication on fullerenes took place in 1970 by the Japanese chemist Eiji Ōsawa , who theoretically predicted and calculated their existence. He published this and the following of his publications in Japanese, which is why the publication by the researcher Robert F. Curl jr. , Which appeared 15 years later on November 14, 1985 in the journal Nature , was published in Japanese . (USA), Sir Harold W. Kroto (England) and Richard E. Smalley (USA) received worldwide attention. They received the Nobel Prize in Chemistry for this in 1996 , while Osawa was not included.

Before these publications on fullerenes there were some on "hollow molecules", for example an article by David Jones in New Scientist 1966, reprinted in the book "Zittergas und schräges Wasser" (p. 27 f.), With calculations on the stability of hollow molecules, whereby the largest known molecules at that time only had a dodecahedron shape, i.e. only contained 20 atoms.

In 2010, fullerenes were detected in the planetary nebula Tc 1 by infrared images from the Spitzer space telescope . They are the largest detected molecules in extraterrestrial space .

The best known and most stable representatives of the fullerenes have the empirical formulas C 60 , C 70 , C 76 , C 80 , C 82 , C 84 , C 86 , C 90 and C 94 .By far the best-researched fullerene is C 60 , which was named Buckminster fullerene (in English also buckyball ) in honor of the architect Richard Buckminster Fuller because it resembles the geodesic domes he constructed . It consists of 12 pentagons and 20 hexagons, which together form a truncated icosahedron ( Archimedean solid ). Since a classic football has the same structure, it is also called a football molecule ( footballen ).

C 60 was first "manufactured" in 1984 by EA Rohlfing, DM Cox and A. Kaldor. However, the authors misinterpreted the result of their molecular beam experiments in their publication and failed to recognize the special structure and importance of the carbon cluster with 60 atoms. A year later, the research group Harold W. Kroto, James R. Heath , Sean C. O'Brien, Robert F. Curl and Richard E. Smalley provided the correct interpretation of a comparable experiment in 1985. They first hypothesized the football form of the C 60 clusters detected in this way.

A rotating vacuum graphite slice away a short high-pressure helium pulse blown. At the same time, the graphite surface is hit by a laser pulse in the middle of this helium pulse. In the experiment, the laser light had a wavelength of 532 nm, with which an energy of 30 to 40 mJ was transmitted within an irradiation time of 5 ns. The carbon of the graphite suddenly sublimes atomically and combines in the cooling helium environment to form penta- and hexagonal ring structures which, while being driven out of the irradiation room by the helium pulse, combine in a reaction chamber to form carbon clusters of any size, including fullerenes, and in the Mass spectrometer can be detected. However, the yield of C 60 was so low that it was not possible to investigate further properties. In particular, the hypothetical football structure remained unproven.

First images of fullerene crystals grown from a benzene solution. The pictures were taken through an optical microscope in reflection. Leaflets with a diameter of some 10 μm and compact hexagonal rods and asterisks were identified. (Fostiropoulos, 1990) 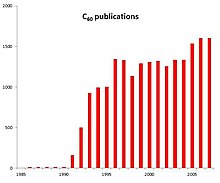 Annual C 60 publication activities triggered by the Heidelberg experiments in 1990.

In 1988, UV and IR spectra of traces of coal dust (soot) measured by Wolfgang Krätschmer and intern Bernd Wagner provided the first indication of the existence of the highly symmetrical C 60 molecule . With an idiosyncratic approach to his experiment, the intern succeeded in producing a coal dust sample in the IR spectrum of which four discrete lines appeared, which Krätschmer initially assessed as "pump oil". Wagner had vaporized graphite in a protective gas atmosphere of 50 Torr argon using a contact arc, and for the first time produced small traces of a molecular material whose weak IR spectra agreed well with earlier theoretical predictions for C 60 .

In February 1989 Konstantinos Fostiropoulos took up Wagner's experiment as part of his doctoral thesis. He first improved its contact arc process and subsequently developed two new processes, one using resistance heating for sensitive electrodes and a robust arc process for efficient production, so that finally preparative production on a gram scale per day and the definitive characterization of the suspected football molecule became possible. He developed a binder-free sintering method and produced graphite electrodes from carbon dust of the 13 C isotope (99%) in order to vaporize them by means of resistance heating below 100 Torr He. With this he achieved an (almost) complete isotopic substitution and generated the exotic 13 C 60 , which provided the necessary evidence that the molecular carrier of the IR absorptions was a pure carbon molecule and not a contamination, e.g. by hydrocarbons. Finally, the electric arc process, as well as the extraction of fullerenes from the soot by means of solvents, was developed for industrial production that is customary today.

It was only this Heidelberg manufacturing process that enabled research on fullerenes on a large scale from 1991 onwards: Two graphite electrodes are vaporized in an electric arc under reduced pressure in a static protective gas atmosphere ( helium or argon ) . The steam condenses on the cooling atmosphere and a rising smoke is formed. The soot produced in this way contains up to 15% fullerenes. The generated fullerenes can then be thermally expelled from the soot or, alternatively, can be extracted with a non-polar solvent ( benzene , toluene , ...). You can also extract the prepared soot sample in a Soxhlet extractor . The fullerene mixture obtained consists of approx. 90% C 60 and approx. 10% C 70 . In contrast, higher fullerenes are only formed in traces. By chromatography , e.g. B. on activated carbon and / or silica gel , the fullerene mixture can be separated.

Production using only rational syntheses is also possible, with flash vacuum pyrolysis taking place in the last step . However, the yield with this process is only around one percent, which is why it is significantly more expensive than manufacturing in an electric arc.

The fullerenes C 60 and C 70 occur naturally in shungite and fulgurite but also molecularly in the interstellar medium.

Fullerenes are brown-black powders with a metallic sheen . They dissolve in some organic solvents (e.g. toluene ) with a characteristic color. Fullerenes can be at about 400 ° C sublimation . 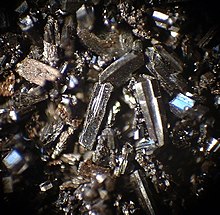 Various possibilities for use as a catalyst, lubricant, for the production of artificial diamonds, in medicine, as semiconductors and superconductors are the subject of research.

Due to the bonding in the molecule, it can absorb and bind an extremely large number of radicals ( radical scavenger ). These are said to be partly responsible for the aging process of the skin. However, this effect of fullerenes has not been scientifically proven.

A study from 2012 reported that oral administration of C 60 dissolved in olive oil to rats showed no toxic effects and significantly extended the life span of the rats. A reproduction of this result is still pending.

For a long time, the IUPAC , which is responsible for binding recommendations on the nomenclature of chemical compounds, refused to recognize the common name fullerene. It wasn't until 2002 that she changed her mind and has been recommending the use of fulleran, fullerene, and fulleroid ever since . That means a lot of relief, because by then the correct , i.e. IUPAC-compliant name, e.g. B. des [60] fullerene (C 60 ), have been:

Construction of a curved surface with pentagons and hexagons

Many fullerenes consist of 12 pentagons surrounded by different numbers of hexagons . Due to the impossibility of completely covering a plane with regular pentagons (and hexagons), the spherical curvature results (see picture on the right). The smallest fullerene is a dodecahedron, C 20 , and consists only of pentagonal carbon rings.

The stability of a fullerene is greatest when

Fullerenes are closely related to graphene , a modification of carbon in which the carbon atoms form a monomolecular layer with a hexagonal structure. The following series can be formed: graphs (only hexagon, flat)> fullerenes, general (5 and 6 corner, convex hollow molecule)> C 20 fullerene (only 5 corner, dodecahedron, narrowest curvature, smallest volume) .

Fullerenes offer three starting points for chemical modifications. Exohedral adducts are obtained through addition reactions on the double bonds . The replacement of carbon atoms from the cage shell with e.g. B. Nitrogen atoms to the C 59 N is called substitutional doping. Finally, such cage structures also offer the possibility of introducing atoms or compounds into the cavity. Compounds of this type are called endohedral complexes . To identify endohedral complexes, the notation X @ C n has become established in the literature , in which an atom or cluster X is located inside a fullerene cage of n carbon atoms.

C 60 has a cavity with a diameter of 400 μm, in which metal and non-metal atoms can be embedded. One example is the intercalation compound of helium , which is correctly designated with the notation He @ C 60 . He @ C 60 is formed when graphite is evaporated in a helium atmosphere.

Furthermore, C 60 used for aromatics as well as alkenes typical reactions such as hydrogenation , halogenation , ozonolysis and Birch reduction enter. However, as a rule, there is no complete conversion of all double bonds; Composition C 60 F 60 can only be achieved with fluorine .

Other interesting compounds are the ionic alkali metal fullerides: C 60 can be reduced with sodium and potassium . This creates compounds with the composition MC 60 , M 2 C 60 and M 3 C 60 (M = Na, K). KC 60 crystallizes in the sodium chloride structure . The C 60 3− anion is present in K 3 C 60 and forms a cubic - closest packing of spheres , with the K + cations occupying all tetrahedral and octahedral gaps in the crystal structure . K 3 C 60 is a superconductor .

In Anton Zeilinger's group at the University of Vienna (see web link), the interference of C 60 molecules on the lattice was observed. Thus the matter waves postulated by Louis de Broglie were also shown for relatively macroscopic objects.

In Jochen Mattay's group at Bielefeld University , extensive studies were carried out on the functionalization of fullerenes to aza-heterofullerenes.

Fullerenes occur in nature only in economically unusable amounts (concentrations).

With the help of mass spectrometry , fullerenes were detected in graphite-like shungite , in glass-like fulgurite formed by lightning strikes , in craters from meteorite impacts and in candle soot.

With the help of the Hubble telescope , large amounts of the C60 fullerene were detected in interstellar space.

C 60 is suitable as a component in different concepts of organic solar cells (OPV - organic photovoltaic). Such systems are based on an absorber layer which consists of a donor-acceptor combination. Because of its high electron affinity, the C 60 molecule is unique for its role as an electron acceptor and is therefore used almost exclusively in such components. As electron donor on the other hand are a large number of organic molecules, such. B. the thermally stable Zn phthalocyanine , and many polymers are available.

At the Helmholtz Center Berlin for Materials and Energy , a research group led by Konstantinos Fostiropoulos achieved an organic solar cell made of C 60 and Zn phthalocyanine , prepared from the gas phase, with a record efficiency of η = 2.5%. To date (as of 2015), fullerene-based OPV concepts achieve efficiencies of up to 12%. An industrial production of organic solar cells is sought.