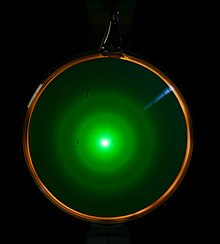 The term matter wave describes the wave-like behavior of matter and is usually used when this behavior comes to the fore compared to the expectations of classical mechanics . The basic theory of the wave behavior of matter was developed by Louis-Victor de Broglie in his dissertation in 1924 , for which he received the 1929 Nobel Prize in Physics . Matter waves are therefore also referred to as de Broglie waves. 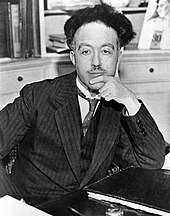 At the end of the 19th century, light was imagined as waves in the form of electromagnetic fields , the wave properties of which can be described in principle using Huygens' principle from 1678, but more precisely using Maxwell's equations from 1864. Such waves can be generated and absorbed with any energy content , even any small one. In the case of matter, on the other hand, it was imagined that it was composed of strongly localized particles of well-defined mass that obeyed Newton's mechanics of 1687. The distinction between wave and matter was first questioned in 1900 when Max Planck proposed a theory to explain thermal radiation , according to which light can only be emitted in certain discrete energy quanta. Planck's proposal could not be justified in the context of classical physics, but Albert Einstein was able to use it in 1905 for the first correct explanation of the photoelectric effect . Einstein suggested that light as such is "quantized" ; H. is only ever present in the form of energy packets, and that these " light quanta " can be absorbed individually and only as a whole in the photoelectric effect. Over the next two decades this idea was confirmed, particularly through experiments by Robert Millikan and Arthur Compton . It formed the starting point of the new scientific field of quantum theory . Einstein's light quanta are called photons today.

Together with his discovery of the light quanta, Einstein was the first to recognize that light must be described as a wave and a particle flow at the same time, thus establishing the wave-particle dualism . In 1924, Louis-Victor de Broglie completed this concept by postulating the other way around in his dissertation that classical particles should also have wave properties. He raised the wave-particle dualism to the general principle. That matter actually has these wave properties was first confirmed independently of one another in 1927 by Clinton Davisson and Lester Germer on the one hand ( Davisson-Germer experiment ) and on the other hand by George Paget Thomson in experiments on the scattering of electrons on thin metal foils. Davisson and Thomson received the 1937 Nobel Prize in Physics for these discoveries .

The matter wave according to de Broglie was generalized to the wave function in the wave mechanics fully developed by Erwin Schrödinger , the square of which describes the probability density of the particle at a certain location.

Einstein photo effect wrote in his interpretation for light of wavelength each photon energy and the momentum to, and the Planck's constant and the speed of light call. De Broglie now applied this equation to particles of matter by reversing the relationship and giving each particle with its momentum the wavelength

In quantum mechanics, it is often useful to use the wave number instead of the wavelength and the angular frequency instead of the frequency . The factor that occurs is combined with the quantum of action to form the reduced Planckian quantum of action . If one also wants to describe the propagation of the wave with a certain direction in three-dimensional space, one extends the wave number to a wave vector . In this representation, the De Broglie equations then read as follows:

From the relationship between momentum and kinetic energy in classical mechanics, the dispersion relation of matter waves follows

thus a quadratic relationship in contrast to the linear dispersion relation of massless objects.

In order to use the De Broglie equations also in relativistic quantum mechanics , the four-momentum from the special theory of relativity can be used. Apart from the constant speed of light, this depends only on the mass and the speed of the particle. The following applies:

The first formula is used to calculate the relativistic energy. The second formula describes the relativistic momentum of the particle. With these two expressions, the De Broglie equations are also written as follows:

These two equations can be represented by using four-vectors in one equation as follows:

Due to the relativistic energy-momentum relation , the dispersion relation follows

which also applies to massless particles.

Electron interference at the double slit according to Claus Jönsson

A matter wave can be assigned to every particle and every composite body. This leads to the fact that, under certain conditions, particles show wave phenomena such as diffraction and interference . The first evidence of electron interference by Davisson, Germer and Thomson confirmed this picture and in particular de Broglie's wavelength formula. Since then, the wave character of matter up to molecular size has been proven in many other experiments. Perhaps most impressive is the double slit experiment with electrons that Claus Jönsson carried out in 1959 at the University of Tübingen . Nowadays, the detection of wave properties in electrons can already be provided in school lessons, for example with an electron diffraction tube .

The wave properties of macroscopic objects play no role in everyday life. Because of their large mass, their impulses are so large, even at the lowest typical speeds, that the Planck quantum of action results in extremely small wavelengths. Since wave properties only show up when waves interact with structures whose dimensions are in the range of the wavelength, no wave behavior can be observed in the macrocosm . The largest piece of matter so far (2016) that showed interference fringes in a particularly sophisticated experiment is a molecule made up of 810 atoms. However, the waves of matter also show up in everyday life, albeit in a less direct way. Because of their inseparable connection with quantum mechanics, they show up in every object whose physical properties are to be described by quantum mechanics. A randomly selected example is a cell phone with its electronic components.

Nowadays, the wave phenomena of matter are used in many ways in the investigation of solids and other materials, but also to clarify basic physical questions. Areas of application are electron diffraction , atomic interferometry and neutron interferometry .

In quantum mechanics it is assumed that a particle cannot be assigned a defined location, but only a probability of being located , which is described by a probability wave. This probability wave must follow a wave equation (e.g. Schrödinger or Dirac equation ). Properties that are assigned to classical particles are explained by closely localized wave packets . The fact that the probability of being located follows a wave equation and thus also has a wave form is the deeper reason for the fact that matter shows wave properties.

Attempts to completely eliminate the concept of the point-like classical particle from quantum mechanics and to explain the observed phenomena only with wave packets from matter waves go one step further.