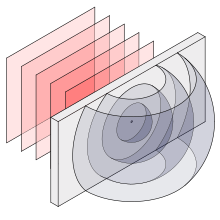 If the hole diameter is significantly smaller than the wavelength, spherical waves are created behind it.

The diffraction or diffraction is the distraction of waves on an obstacle. A wave can propagate through diffraction in areas of space that would be blocked on a straight path by the obstacle. Any kind of physical wave can show diffraction. It is particularly noticeable with water waves or with sound . With light , diffraction is a factor that limits the resolution of camera lenses and telescopes . Some technical components, such as diffraction gratings , make targeted use of diffraction.

Diffraction occurs through the creation of new waves along a wave front according to the Huygens-Fresnel principle . These can lead to interference phenomena through overlay .

In contrast to the diffraction takes place at the scattering a deflection of radiation by interaction of particles instead. In the case of coherent , coherent scattering, one also speaks of reflection .
In the case of refraction , the deflection of radiation is based on the change in the speed of propagation with a change in the density or the composition of the propagation medium , most clearly when passing through a phase boundary .

Christiaan Huygens noticed as early as 1650 that certain previously inexplicable phenomena can be described with the propagation of light in wave form. He formulated the Huygens principle and thus founded wave optics . The effect of the diffraction of light at an optical slit was finally observed in 1662 by Francesco Maria Grimaldi , who described light as a wave in his work De lumine . In 1802 Thomas Young carried out corresponding experiments on the double slit . A complete physical description of diffraction could be provided by Augustin Jean Fresnel in 1818 , which was initially questioned by Siméon Denis Poisson , but shortly afterwards by François Arago through the experimental proof of the Poisson spots theoretically predicted by Poisson himself during diffraction on one Ball could be confirmed.

In 1835 Friedrich Magnus Schwerd investigated diffraction phenomena on regular gratings, which could also be described with the help of wave optics. In 1909, Geoffrey Ingram Taylor was able to show in the Taylor experiment that light with extremely low intensity, i.e. also individual photons, is diffracted, with which the wave-particle dualism could be demonstrated.

In 1924 Louis-Victor de Broglie developed the theory of matter waves , and just three years later Clinton Joseph Davisson and George Paget Thomson were able to show through experiments on electron diffraction that particles with mass can also be bent. Another three years later, Otto Stern , Otto Robert Frisch and Immanuel Estermann were able to demonstrate this effect by diffracting rays from helium atoms and hydrogen molecules on a lithium fluoride crystal . In 1961, Claus Jönsson also carried out experiments on the diffraction of electrons at single and double slits .

Diffraction at a single slit with slit width s and deflection angle φ : The picture illustrates the attenuation of the radiation at the first minimum. For illustration, the beam is divided into two halves, so that a beam from the lower half with the path difference d can be assigned to each individual beam from the upper half . If d is equal to half the wavelength λ, there is an intensity minimum, since a wave crest of a single beam in the upper half is superimposed by a wave trough of a beam in the lower half. For the following orders of the minima, the ray is divided into four, six, etc. parts.

Because of the wave nature of the light , its real behavior deviates strongly from what the geometric optics would suggest. In photography, for example, the resolution of a photo is limited by the diameter ( aperture ) of the lens due to diffraction .

Slit and intensity distribution of monochromatic light behind the slit as an image and curve for a narrow (above) or wide slit. The diffraction phenomena are clearly recognizable with a narrow slit, minima and maxima occur, wavelength and slit width are of the same order of magnitude.

Diffraction can be observed well, among other things, if geometric structures play a role, the size of which is comparable to the wavelength of the waves used. Optical diaphragms are dimensioned depending on the application in such a way that they cause diffraction effects - i.e. with dimensions in the range and below the light wavelength, or with sufficient accuracy none - then with dimensions well above the light wavelength.

Examples of diffraction at diaphragms

Diffraction patterns that differ greatly in some cases occur on diaphragms of other shapes.

Diffraction at the grating

Diffraction of a laser beam on an optical grating

Optical grating
If many gaps are arranged at regular intervals, a series of diffraction reflections results, the arrangement of which corresponds to that which one would expect with a double gap with the same distance. However, as the number of individual columns increases, the reflections become increasingly sharp lines. Since the position of the reflections depends on the wavelength of the light, optical grids can be used to separate different wavelengths. This is the case in the monochromator and in spectroscopy . In practice, regular arrangements of reflective and non-reflective strips are very often used as reflection gratings. The unprinted side of a CD looks similar.

X-ray diffraction
This is used in crystallography to determine and measure crystal lattices . The wavelength of the X-rays is comparable to the lattice spacing in the crystal, and the crystal lattice acts as a multi-dimensional optical lattice.

Other types of waves

In principle, laws that apply to the diffraction of light waves also apply to other wave phenomena.