The Bragg equation , also called the Bragg condition , was developed by William Lawrence Bragg in 1912 . It describes when there is constructive interference of waves when scattered on a three-dimensional grid. She explains the patterns that arise during the diffraction of X-ray or neutron radiation on crystalline solids from the periodicity of lattice planes. The analogue of the Bragg condition in reciprocal space is the Laue condition .

Diffraction image of a crystal, recorded with monochromatic X-rays (beam points perpendicular to the center of the detector)

If X-rays strike a crystal , a large part of the radiation penetrates it unhindered. However, it is also observed that a small part is deflected by the crystal - a phenomenon known as X-ray diffraction . If you mount a suitable detector behind the crystal, for example a photo plate , in order to make the deflected radiation components visible, characteristic patterns are created on it.

The lattice levels are usually marked with Laue indices hkl , so that, for example, in the cubic system, this results in:

with the lattice constant . The Bragg condition in the cubic system is:

Schematic representation of the diffraction phenomenon

In fact, it is a diffraction phenomenon . In the electromagnetic field of the incident radiation, the electrons of the atoms are excited to forced oscillations and begin to emit radiation themselves in the form of spherical waves. Since the waves of the individual electrons add up as a first approximation to waves of the associated atoms, and furthermore the distances in the crystal lattice and the wavelength of the X-rays are of a similar order of magnitude, interference phenomena occur.

If the Bragg equation is fulfilled at a given wavelength for a family of parallel lattice planes, i.e. if the X-rays hit the crystal at the correct angle, there will be constructive interference of the spherical waves that are produced during diffraction at the electron shells. Macroscopically, there is the impression of a reflection of the radiation on the crystal.

The blue lines in the graphic opposite (scheme for diffraction geometry) correspond to rays that hit parallel lattice planes and enclose the angle with the perpendicular . The complementary angle is called the Bragg angle or gloss angle . d is the lattice plane spacing, the black dots are atoms on the lattice planes.

Due to the large number of atoms in a crystal, in the event of not exclusively constructive interference, there is always a second statistically for each atom, which cancels out the diffracted wave of the first so that no reflection can be observed. This is also the situation in non-crystalline material , regardless of the direction of irradiation.

where n is also referred to as the diffraction order.

It is important to understand that the red lines are not extensions of the upper light blue lines, but the perpendicular to them.

Carrying out the experiment 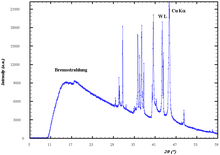 Emission spectrum of a copper anode with X-rays of different wavelengths (or here plotted as an angle).

The rotating crystal arrangement is a possible implementation of the experiment. Since earlier X-ray machines were very heavy and therefore not rotatable, the X-ray beam was directed onto a rotating crystal. By rotating the crystal and the receiver, the crystal could then be examined from different angles. A second possibility is the Debye-Scherrer process , in which the crystal is pulverized so that every "direction of rotation" is statistically distributed at the same time.