As a wave optics or physical optics is referred to in the physics of the portion of the optical system , the light as the electromagnetic wave treated. With the help of wave optics, properties such as color , interference ability, diffraction and polarization of light can be explained that cannot be explained with geometric optics .

Diffraction at the slit according to Huygens' principle . The yellow dots show the imaginary starting points for new waves.

As early as the 17th century it was recognized that the classical interpretation of light as a bundle of straight rays must be incomplete. Diffraction and interference cannot be explained in this way. Christiaan Huygens noticed around 1650 that light propagation analogous to water waves would explain the phenomena. He formulated his Huygens principle , which states that spherical elementary waves emanate from every point of a diffractive surface , which superimpose and thus cause the observable diffraction effects. First, Huygens was not taken seriously because you the corpuscular theory of Isaac Newton favored. It was not until the 19th century that the wave theory (also known as undulation theory) was confirmed by Thomas Young's double slit experiment. The work of Joseph von Fraunhofer and Augustin Jean Fresnel expanded the theory further. Friedrich Magnus Schwerd applied the wave theory to explain his extensive diffraction experiments.

When looking at the interactions between light and matter, various effects were observed that can no longer be explained with geometric optics. So behind openings - as well as behind edges in general - when parallel light rays pass through (sufficiently distant or punctiform light source) in the shadow area, light stripes with decreasing intensity are formed. The light is bent. In the case of multiple slits with slit spacings in the order of magnitude of the wavelength of the light used, the partial waves that are diffracted at the individual edges are superimposed. These partial waves interfere with each other. In the case of very short wavelengths or very large objects, the diffraction of light is negligible and the laws of ray optics (= geometric optics) are used for calculations. In wave optics, light is described by a transverse wave with wavelength , amplitude and phase . Each wave is represented mathematically as the solution of a wave equation :

It is the Laplace operator , c the speed of light and u of place and time t abhängende wave function. The wave function can either be scalar or vectorial . The vectorial description of the light is necessary if the polarization plays a role. Otherwise the scalar description is the simpler one.

The wave equation is equivalent to the Helmholtz equation , since both are related via the Fourier transformation in time or frequency :

Where is the Fourier transform of . Introducing the wave number , the Helmholtz equation results

A solution to this equation results from the approach

under the approximation that the amplitude varies only slowly, i.e. i.e. can be considered constant over a distance on the order of the wavelength .

The areas determine the areas of the same phase (= wave fronts). For z. B. result in a plane wave . The gradient field indicates the direction of propagation of the individual points of the wave front. In the example of the plane wave, the gradient field is and the wave fronts spread in the x-direction. In the vicinity of a point , every wave described by the above solution can be understood as a plane wave with wave number ( refractive index at this point) and direction of propagation . is called eikonal and is an important function in geometrical optics, because it determines the local wave vectors of the wave (direction of propagation times wave number). The beam paths in geometric optics are identical to the local wave vectors. With the given approximation, the eikonal equation can be obtained by inserting the approach into the Helmholtz equation :

This equation says that the refractive index determines the phase of the wave and forms the formal basis of geometric optics: 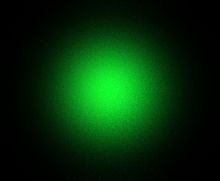 Image of the light intensity from a 532 nm laser pointer focused on a digital camera. It is the dominant TEM 00 - Mode to see.

A large area of ​​application for wave optics is concerned with lasers . On the one hand, laser light is almost monochromatic and, on the other hand, it is so strongly bundled that the light beam remains close to the axis for long distances (= does not diverge). Such waves are solutions of the Helmholtz equation under the paraxial approximation . This means that the amplitude must not change significantly in the direction of propagation . Mathematically, this means that the second derivative of the amplitude after may be neglected .

An important solution that results from this approximation is the Gaussian solution . The picture on the right shows the Gaussian distribution of the intensity of light from a laser pointer.

In addition to the amplitude, you can also look at the phase of the wave. If several waves are in a constant phase relationship, one speaks of coherence. Coherent waves have the property that they can interfere with each other. Different waves are superimposed in such a way that there is a reinforcement (wave crest meets wave crest - constructive interference) or weakening (wave crest meets wave trough - destructive interference).

A transverse wave always oscillates perpendicular to the direction of light propagation, but still has two degrees of freedom. If the oscillation only takes place in one plane or if it changes regularly, one speaks of polarized light. The polarization can only be explained by the vector representation as an electromagnetic wave.

Instead of rays of light, one looks at the generalized concept of the wave front in wave optics. A wavefront is a surface that unites points of the same phase of different waves. Light rays are always perpendicular to the wave front.

There are phenomena that cannot be explained by wave theory. This includes the external photo effect discovered by Wilhelm Hallwachs in 1887 and declared by Albert Einstein in 1905 (Nobel Prize 1921). Einstein explained the interaction between light and matter with the light quantum hypothesis . One then spoke of wave-particle dualism . The apparent contradiction that light behaves like waves as well as particles is of central importance for modern quantum physics .