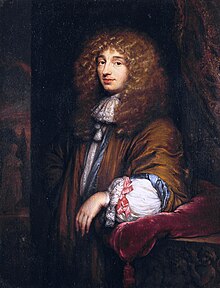 Christiaan Huygens [ ˈhœi̯ɣəns ] ( pronunciation ? / I ) (born April 14, 1629 in The Hague ; † July 8, 1695 ibid), also Christianus Hugenius , was a Dutch astronomer , mathematician and physicist . Huygens is considered one of the leading mathematicians and physicists of the 17th century , although he never made use of the infinitesimal calculus , which was developed during his lifetime . He is the founder of the wave theory of light , formulated a principle of relativity in his investigations into elastic impact and constructed the first pendulum clocks . With telescopes improved by him, he made important astronomical discoveries.

Huygens was born the son of Constantijn Huygens , who was a linguist, diplomat, composer and Holland's leading poet at the time. Through his father, Christiaan came into contact with important personalities at an early age, including Rembrandt , Peter Paul Rubens and René Descartes . Christiaan was tutored by his father as a child. He later studied law at the University of Leiden , but soon switched to mathematics and natural sciences.

His first published work (1651) dealt with the squaring of cones and showed an error in an alleged proof of the squaring of the circle . He also dealt with the circle number π (pi), logarithms and did important preparatory work for the infinitesimal calculus , on which Leibniz and Newton could then build. In 1657 he published the first treatise on the theory of the game of dice ( De ludo aleae ), which makes him one of the founders of probability today. This was preceded by correspondence between Blaise Pascal and Pierre de Fermat , about the contents of which Huygens claimed, however, nothing was known. If one analyzes the solutions to the five problems listed at the end of his treatise, one must assume that he knew Pascal's ideas, but not the combinatorial paths of Fermat.

Turning to the natural sciences 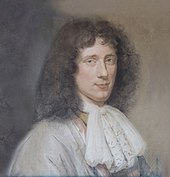 Huygens became increasingly interested in the then modern areas of natural sciences, optics and astronomy with telescopes . He was in contact with Antoni van Leeuwenhoek , then the leading lens grinder and microscope designer . For a short time, Huygens also examined small objects under the microscope. But he soon began to grind lenses for telescopes himself and, together with his brother Constantijn Huygens Junior, constructed his first telescope. Huygens developed wave theory of light , which enabled him, lenses with lower aberrations to grind (aberration) and to build the better the telescopes; his discoveries also increased the sharpness of the camera obscura and laterna magica . He was the first to formulate the Huygens principle named after him , which is considered the basis of wave optics . Like many other physicists of his time, Huygens also developed his own theory of an ether for light and gravity.

Huygens first discovered Saturn's moon Titan in 1655 with his self-made telescope . This made Saturn the second planet after Jupiter (apart from the earth), where a moon could be detected ( Galileo Galilei had already discovered the four largest Jupiter moons in 1610 ). Also, through the better resolution of his telescope, he could see that what Galileo called the ears of Saturn were actually Saturn's rings.

He also found out that these rings had no connection to the planet and that their mysterious disappearance every 14 years was due to the fact that they were then seen from the side, but were too thin to be seen from Earth .

Further astronomical achievements of Huygens were the discovery of the rotational movement of Mars and the calculation of the rotation period (Martian day) with approximately 24 hours as well as the resolution of the trapezoid in the center of the Orion Nebula into four individual stars. In his honor, the brightest region of the Orion Nebula is also called the Huygens region . He also discovered other nebulae and binary star systems and suggested that Venus was covered by a dense cloud cover. 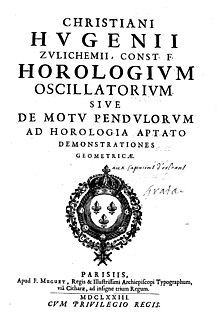 Besides astronomy, Huygens was also interested in mechanics. He formulated the laws of impact and dealt with the principle of inertia and centrifugal forces . He was able to use his studies of vibrations and pendulum movements to build pendulum clocks. Galileo had designed one, but not built it. Huygens, however, was able to apply for a patent for his watch. The watches built on his behalf by Salomon Coster had an accuracy of ten seconds per day, a precision that could only be surpassed a hundred years later. Later he also designed pocket watches with spiral springs and a balance wheel .

In 1673 Christiaan Huygens published in his treatise Horologium Oscillatorium a precise pendulum clock with a cycloid pendulum, in which he made use of the fact that the evolution of the cycloid is itself a cycloid. However, the advantage in accuracy is offset by the disadvantage of increased friction.

He also made the earliest known clock for determining the degree of longitude , which featured several revolutionary techniques and was only recognized as the originator some time ago.

In his last scientific treatise in 1690, Huygens formulated the idea that there could be many other suns and planets in the universe and was already speculating about extraterrestrial life .

The correct derivation of the laws of elastic shock also comes from Huygens , making use of a principle of relativity (see Galileo transformation ). He published his findings, dating back to the 1650s and correcting the incorrect treatment by René Descartes , in 1669 (Philosophical Transactions of the Royal Society, Journal des Savants) and in his posthumously published book De Motu Corporum of 1703.

Christiaan Huygens and Samuel Sorbière (1617-1670) were the first two foreign scientists who were accepted into the Royal Society in June 1663 . In 1666 Huygens became the first director of the French Academy of Sciences founded that year . Newton called him the most elegant mathematician of his time.

Huygens discovered the relationships between the speed of sound, length, and pitch of a pipe. He dealt intensively with the mean-tone tuning and in 1691 calculated the division of the octave into 31 equal steps in order to correct the error of the Pythagorean comma in the musical system .

In the 1680s, Huygens' health deteriorated and he did not leave home often. In the last years of his life, the scientist dealt with music theory. In 1695 Christiaan Huygens died unmarried and childless in The Hague.