The title of this article is ambiguous. A constellation of the same name can be found under pendulum clock (constellation) 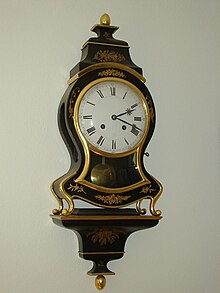 Pendulum clock in the Villa Hammerschmidt

The pendulum clock , even Pendule or Pendüle called, is a clock whose clock a mechanical pendulum (obsolete also: pendulum ) is. The oscillation of the pendulum determines the timing, an approx. 1 m long pendulum (exactly 0.994 m) swings from one side to the other in 1 second. The shorter the pendulum, the more often it swings per second.

Pendulum clocks come in various forms, especially as a tower clock , wall clock , table clock or floor clock . Because of the interference with the pendulum movement caused by external accelerations, they are fundamentally unsuitable for moving clocks, such as wristwatches or clocks on vehicles.

It was also around this time that Christiaan Huygens (including the inventor of the balance wheel with a spiral) was concerned with the theory and design of the pendulum clock. The first (functional) pendulum clock with verge escapement designed by Huygens , which is now kept in the Rijksmuseum in Leiden, was built by the master Salomon Coster in 1657. It had a rate deviation of about ± 10 s per day. This value could only be improved to less than a second per day 100 years later when John Harrison beat his Time Keeper No. 4 , but instead of a pendulum it has a balance wheel.

The principle of the pendulum clock is based on the fact that a swinging or rotating pendulum triggers an action in the clockwork at a certain point of its path with each passage, whereby the time display is switched further (this is most often done by the helical gear and lever escapement). In addition, the pendulum receives an impulse ( lifting ) from the clockwork or another drive so that the oscillation is maintained despite the loss of energy through friction.

The adjustment of the oscillation period of pendulum clocks is done by changing the effective pendulum length.

The oscillations of hanging, stable pendulums, which rotate around a horizontal axis , are more uniform than other pendulum oscillations. Such inaccurate processes are, for example, the vertically oscillating spring pendulum (see harmonic oscillation ) or a simple thread pendulum . Both can hardly exceed an accuracy of 0.01 percent, whereas a shielded compensation pendulum, for example , can achieve 0.0001 percent (10 −6 or ± 0.1 seconds per day). Special constructions come in the range of a few ms per day.

In classic pendulum clocks, the oscillation is converted into a step-by-step rotation of the escape wheel via the escapement , which in turn is driven via a gear train, for example by the clock weight , in order to be able to deliver a metered impulse to the pendulum.

The pendulum of electric pendulum clocks gets its energy from a coil, which is supplied with electrical current at the right moment via pendulum contacts or another control. The coil moves the pendulum made from a permanent magnet . The coil itself can also be used to obtain the control signal by utilizing its mutual induction voltage . The lower damping in such clocks and the more easily achievable constant amplitude of the pendulum improves the accuracy considerably.

One of the most accurate pendulum clocks is the Shortt clock, which has been largely free of interference . In the master clock, an almost free pendulum swings in a vacuum . A second clock, synchronized with the master clock, contains all other moving parts that would affect the master clock. The error of this clock is a few milliseconds per day. This accuracy was only surpassed by temperature-stabilized quartz watches around 1933 .

Astronomical pendulum clocks are clocks with particularly high accuracy, which usually have a second pendulum.

The second shock allows for measurements of star passageways - as in the telescope of a meridian circle - the exact correlation of time with the through field . Withdrawing Star (up to 15 "/ s) with the so-called eye-ear method can time measurements up 0.1 To be carried out precisely to a second .

The rate regulation (calibration) of pendulum clocks takes place by means of adjusting screws at the lower end of the pendulum or by means of weight plates.

The temperature compensation of good pendulum clocks takes place by means of three-bar pendulums or mercury pendulums . The center of mass or the rod length of the pendulum are influenced in order to compensate for the thermal expansion of the pendulum and the resulting temperature dependence of the oscillation frequency. The dependence of the period of oscillation on the air pressure can be reduced with the help of the aneroid can compensation or compensated by encapsulating the pendulum.

A pendulum that can be turned around and has the same period of oscillation around both axes (usually agate edges ) is called a reversion pendulum . This technique allows the exact measurement of the pendulum length and therefore also the acceleration due to gravity using the pendulum formula above .

The earth's gravitational field was explored in a similar way as early as the 18th century . The shape of the earth was determined and the meter was defined through a combination of gravimetry and geometric degree measurement .

Today, high-precision spring balances , the so-called gravimeters, are used for this . 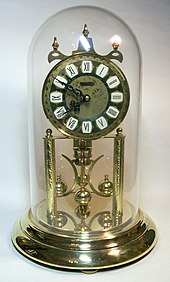 Private pendulum clocks usually have pendulum lengths of 15 to 25 cm; The latter corresponds to about 1 [s] oscillation period. They achieve an accuracy of a few seconds per day. Shorter pendulums swinging in front of the dial have so-called zapplers, two swinging pendulums are called double zappers. They are table or short wall clocks whose case is only closed on the front side. Its accuracy is ten seconds a day.

The end of the pendulum clocks

In 1933, Scheibe and Adelsberger from Berlin designed the first quartz clock and thus heralded the end of pendulum clocks. Nowadays, a quartz watch easily rivals a precision pendulum watch in terms of accuracy.

The ornamental clocks with swivel pendulum (often with imitation brass balls ) or small, fast pendulums, which are mass-marketed nowadays, are actually quartz clocks - they have an additional electric drive for the movement of the pendulum just for decoration.

An eyecatcher is a clock in which the eyes of a figure move with the pendulum.

This is a swinging pendulum clock in which the pendulum and clockwork form a unit.