The agate is a variety of the mineral quartz , which only forms microcrystalline mineral aggregates in the form of drusen and almonds . A striking feature of agates are the predominantly brightly colored, strip-shaped deposits due to the rhythmic crystallization that become visible when cutting drusen or almond stones. However, there are also unstriped and single-colored agates.

Natural agates can come in almost any color. But mostly these are rather pale or pastel colored. However, it has been known since ancient times that agates can be colored well. Bright colors such as cobalt blue , magenta , violet and pink are therefore often an indication of artificial coloring (see the section on manipulations and imitations ).

Theophrastus of Eresos gave the agate its name because it was found in large quantities in the river ἀχάτης " Achates " (now called Dirillo , Carabi or Canitello ) near the town of Acate in Sicily .

The agate was valued very early on. In ancient Egypt around 1000 BC. Chr. Seal cylinders , rings, gems and vessels made of agate. In the Bible in Exodus, 28, 17-20, the breastplate of the high priest, a plate set with precious stones, is described in detail. Agate amulets should help against lightning, storms and thirst.

At the beginning of the 17th century the agate industry had already grown to great importance, it took a further boom in the second half of the 18th century when agate goods began to be set first in silver and then in gold-plated tombac . This fausse jewelery shop was established in Oberstein and later also brought pure metal goods onto the market.

After 1813 the change in the color of the stones was discovered through firing , and in 1819 a trader from Idar-Oberstein brought home the secret of "blackening" acquired from a Roman stone cutter . Since then, agate dyeing has developed very quickly and has become one of the main reasons for the flourishing of the agate industry, which now also processed foreign stones, namely agate from Uruguay . This material came to Idar-Oberstein in 1834 and developed the agate industry in a manner not known before, especially as the onyxes, which arrived in abundance from South America, caused the art of stone cutting to flourish in Paris and Idar. Cameos were mainly made , including inlays , some of which were of high artistic value, and great business was done with them. The pieces exported to Africa were also called Negro money .

In the course of time, due to the variety of training variants in color and shape, various proper names were coined for differentiation and classification, some of which are also used as trade names . Well-known variety names are among others

Agates are formed in rock cavities as their lining or filling: If it is (completely) filled, it is called an almond , if it is (incomplete) it is called a druse . As rock cavities primarily bubble spaces in volcanic rocks come into consideration, here the gases contained in the outflowing lava no longer penetrated to the surface of the lava flow and could not escape, but they were enclosed in the cooling lava and formed a cavity in it was filled with agate, quartz , calcite or other mineral substances in a later process . Both basic volcanic rocks, for example basalt , and acidic volcanic rocks, for example rhyolite , can be considered as volcanic rocks .

These bubble spaces in volcanic rocks are the most common places where agates can be formed, but agates are also formed in passages and crevices of various rocks and also in cavities of sediments. Also in fossils, e.g. Agates are observed in petrified trees, in silicified corals and in dinosaur bones.

Over the past 200 years, numerous mineralogists have dealt with the question of how the silicon dioxide-containing material penetrated these cavities and put forward various theories. Here it had to be clarified how z. B. in a basalt , so in a basic, low-silicate rock, such an accumulation of pure SiO 2 could take place. The originally existing thesis that the SiO 2 accumulation had already taken place in the molten rock and that drops of liquid silicon dioxide were already deposited in the glowing magma is now to be regarded as obsolete, if only because agates can also be found in rocks that have never been in a glowing state (see above). Today the unanimous opinion is that agates were formed in the so-called sedimentary-diagenetic range, i.e. at temperatures up to a maximum of 200 ° C.

Furthermore, the thesis was put forward that aqueous silicic acid solutions penetrated the rock cavities through so-called infiltration channels, deposited an agate band on the cavity wall and then left the cavity again. After numerous repetitions of this process, the cavity has gradually filled with agate. This so-called infiltration theory presupposes the dubious transport of large amounts of water in the rock and is therefore no longer recognized today.

When looking for a solution to the agate problem, the focus today is on a theory that was developed by Michael Landmesser at the Institute for Gemstone Research in Mainz. Landmesser assumes that in addition to larger cavities, there is a network of fine hairline cracks and capillaries in the rock, which is constantly filled with water and in which the silica required for accumulation in the form of monosilicic acid H 4 SiO 4 is transported by diffusion . According to Landmesser, it is not the transport of large amounts of water, but the diffusion process of the monosilicic acid that plays the decisive role in agate genesis. The monosilicic acid molecules react with one another in a continuous accumulation process, whereby the molecules combine via common oxygen atoms to form disilicic acids, tricilicic acids, tetrasilicic acids, etc., until finally colloidal polysilicic acids are formed, which are deposited on the walls of the cavity due to adhesion and in one The maturation process (especially the release of water) finally turns into solid cryptocrystalline quartz. This process takes place over long periods of time in which the external conditions such as pressure, temperature, and the presence of accompanying minerals, for example Fe 3+ compounds, change, which leads to the development of the characteristic agate banding. 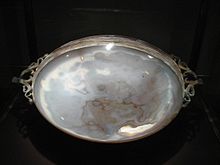 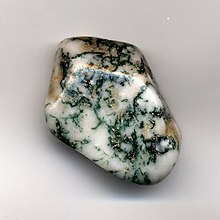 The structure of agates usually consists of concentric or irregular layers that fill a cavity. The agate consists of different varieties of chalcedony , microcrystalline silica. The individual layers show coarser and finer structures and are often extremely thin, so that a few hundred come to 1 mm. In any case, completely amorphous (water-containing) silica is very rarely found in agates. The different color is usually due to iron and manganese compounds, but the onyxes (black and white layers), sardonyxes (brown and white layers) and carnelian (also sarders ) are usually artificially colored. Between and above the chalcedony there are mostly drusy amethyst layers . Very often the almond encloses a hollow gland space in which rock crystal , amethyst, calcite , zeolites , hematite and other minerals are formed. At Oberstein, all chalcedony layers nestle against the outer shape of the almond; in the Brazilian almonds there is usually a layer of plane-parallel horizontal layers inside . It is not uncommon for the channels through which the inner mass, or rather the liquid which it contained dissolved, to penetrate into the tonsil space, are exposed during grinding. So this is formed first, and progressing from the outside to the inside, the individual layers of aqueous solution are deposited, whereby the deposited mineral not infrequently blocked the way for the penetrating liquid and thus a cavity remained inside.

After the disintegration of the matrix in which the agates were embedded, they are free and, due to their silicon-containing nature, which is extremely resistant to corrosion by air or water, remain as nodules in the soil and in the gravel, even if they rolled in rivers become.

Agate is a very resilient mineral and shows no reaction to water or solar radiation. It is also quite well protected against dents and cracks, as it has a high degree of hardness and density.

Agate and its varieties are mainly used as gem stones . Agates, which are distinguished by their coloring and drawing, have always been used to cut stones ( gems , cameos , seal rings ), but also to mortars and mortars , smoothing stones, ring stones, agraffes , bracelets, rosaries, stick buttons, knife handles , wefters and many other decorative or useful items Objects processed.

Because of its high hardness and resistance to chemicals, agate is also increasingly used in technology.

Agates are used as polishing stones for gilding in order to consolidate the applied gold leaf on the substrate and to polish it to a high gloss.

Agate is already described as a mystical stone in the Old Testament , where it symbolizes one of the twelve tribes of Israel in the breastplate ( Hoshen ) of the Jewish high priest .

The use of agate as a healing stone is passed down among others by Hildegard von Bingen (1098–1179) in her “Book of the Stones”. According to her, the stone, applied externally after contact with poison from spiders and snakes, should heal the painful area and remove and pull the poison away. From the " falling sickness " ridden people, epileptics should constantly an agate wear on the skin to be spared from outbreaks. Special dietary regulations using agate to prepare the cooking water should even be able to cure these diseases ("unless God does not want it"). Carried openly through the house in the shape of a cross, the agate is supposed to protect it against thieves.

Among esotericists today, agate or its sub-varieties are also used as a healing stone for various ailments such as eye agate and onyx against eye infections, carnelian against sore throats, varicose veins, sciatica and testicular diseases as well as the agate itself against water blisters on the feet.

As a monthly stone it is said to have been assigned to the month of May by the Romans of antiquity and according to Isidore of Seville (around 560–636) .

In line with fashionable tastes, the jewelry industry often makes use of the possibility of coloring the agate, which is based on the different nature of the individual layers of the stone, some of which are porous enough to soak up liquids, others not.

For example, most onyxes are artificially created by heating the agate in a dilute honey or sugar solution for two to three weeks and then boiling it in concentrated sulfuric acid. After it dries, it is sanded, put in oil for a day and, at the end, washed off with bran. The porous layer, in which the honey that has penetrated has been charred by the sulfuric acid, appears gray, brown or black, depending on the porosity, the impenetrable white, crystalline layer even lighter and shinier. Various chemicals can be used to create any color, as long as the agate absorbs liquids.

Before processing, the stone is often burned to change its color and then placed in sulfuric or nitric acid for a week or two. The coloring, however, is usually only carried out on the cut stones, although the color penetrates deeply into the stone mass and also appears more or less clearly on the break.

If agate is recolored in naturally occurring colors, it can only be distinguished from real agate under the microscope. Colors that do not occur in natural agate such as cobalt blue , magenta , purple or pink , on the other hand, are easy to recognize.

The declaration of colored agates is voluntary and not mandatory.