This article describes the landscape in South Asia; for the airline, see Simplifly Deccan . 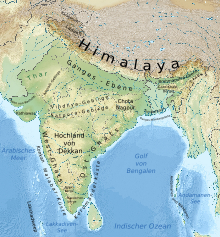 Deccan or Deccan , English and Deccan , (see. Hindi दक्खिन dakkhin [ d̪ʌkːʰɪn ] from Sanskrit दक्षिण dakṣiṇa [ d̪ʌkʂɪɳʌ ] "South") is the name for the southern part of the Indian subcontinent , which in the north of the Indo-Gangetic plain , in the west by the Arabian Sea and in the east by the Bay of Bengal - two foothills of the Indian Ocean - and extends in the south beyond Cape Komorin to the mountains of Sri Lanka . 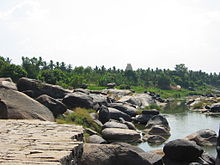 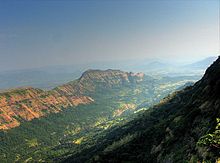 A distinction must be made between the entire Dekkan and the Dekkan plateau (highlands of Dekkan). The plateau extends in the north into the landscape around the river Tapti and borders there on the mountain ranges of the Satpura, in the west and east the mountain ranges of the Western Ghats and Eastern Ghats form the borders, which almost collide in the south. It is a table land , wavy in the east, which flattens out to the west and forms extensive plains. The Dekkan-Trapp in the northwest is one of the largest basalt areas on earth with around 500,000 km². In the west, the heights of the Dekkan Plateau are 1000 to 1300 m, in the center 500 to 600 m. The rivers originating from the Western Ghats flow through the plateau in an easterly direction and flow into the Bay of Bengal.

In addition to isolated areas with alluvial and diluvial soils, fertile black earth and laterite soils predominate. The Deccan Plateau is relatively dry because the southwest monsoons are held by the Western Ghats. Agriculture is therefore dependent on irrigation.

The predominant language groups are Marathi , Telugu and Kannada , small groups of the indigenous people of southern India form the Bhil and Kol . The Muslim population, who is mainly based in the cities, mostly speaks Urdu .

Whether the Neolithization of the Deccan took place from East India or took place on site is a matter of dispute. The wild precursors of millet ( Brachiaria ramosa ) and whorled millet ( Setaria verticillata (L.) P. Beauv.) Grew in the savannahs of the southern Deccan, as did wild cucumbers ( Cucumis sativus L.). The Neolithic of the Southern Deccan is divided into the following phases:

Only from the early 2nd millennium BC In BC ( Chalcolithic ) wheat, barley and legumes were grown. Crops from China or Central Asia appear around the turn of the 2nd millennium. They are millet ( Setaria italica L., Panicum miliaceum L.) and hemp ( Cannabis sativa L.).

From the 3rd century to the 14th century, the kings of Orissa ruled the country. Then the country was conquered by the Muslims under Allah ud Din . In 1676 Shivaji established a separate Marathas state . In 1818, the dean came under English rule. After the Deccan Riots of 1874/1875, an estimated 1.3 million people were killed in the course of a severe famine from 1876 ​​to 1877.