This article is about a Dravidian language. The similarly spelled country can be found under Canada .

Kannada (ಕನ್ನಡ kannaḍa ), also Canarian , is a language from the Dravidian language family . It is spoken by around 44 million native speakers in southern India , mainly in the state of Karnataka , and is mainly written in the Kannada script . The speakers of the Kannada are called Kannadiga .

Distribution and number of speakers

Approximate distribution area of ​​the Kannada

The distribution area of ​​the Kannada largely coincides with the southern Indian state of Karnataka , whose borders were drawn in 1956 along the language border of the Kannada. There are also Kanada-speaking minorities in the neighboring areas of South India. More recently, Kannada has also been spoken among expatriates in the United States , the United Kingdom , Canada and Australia . The Kannada is the official language in the state of Karnataka. Most of the state's non-Kannada-speaking residents have a command of Kannada as a second language . In addition, it is recognized as one of 22 constitutional languages ​​in India on a supraregional level .

According to the 2011 Indian census, Kannada is spoken by almost 44 million people as their mother tongue. A good 41 million of them live in Karnataka, where Kannada speakers make up around two thirds of the population. Larger minorities of Kannada speakers can also be found in the neighboring states of Tamil Nadu (1.3 million), Maharashtra (1.0 million) and Andhra Pradesh (0.5 million).

Kannada belongs to the family of Dravidian languages, which are mainly spoken in South India . Besides Telugu , Tamil and Malayalam , Kannada is one of the four major Dravidian languages. Within this family of languages, Kannada belongs to the South Dravidian branch. The Kannada's closest relative is Badaga . This language, spoken among the tribal population of the Nilgiri Mountains in Tamil Nadu, is sometimes also understood as the Kannada dialect.

Kannada is not related to the Indo-Aryan languages spoken in northern India . However, it has been heavily influenced by Sanskrit , the classical language of Hinduism , and, in addition to a large number of loanwords, has also adopted structural features from this Indo-Aryan language.

In parallel to the geographical dialects, there are caste dialects or sociolects . The main distinction here lies between the dialects of the Brahmins , non-Brahmans and Dalit dialects. More recently, however, class differences have increasingly taken the place of caste membership among sociolects .

The written and spoken language in the Kannada are quite different from each other, even if the diglossia is less pronounced than in the related Tamil. The spoken language of the educated urban population of Bengalurus and Mysurus has established itself as the supraregional standard colloquial language.

History of language and literature

Kannada is divided into three language levels: Old Kanada (up to 1200), Middle Kanada (1200–1700) and modern Kannada (since 1700). The oldest surviving language certificate of the Kannada is an inscription found in the Hassan district , which is dated to around 450.

Kannada is the second oldest Dravidian literary language after Tamil. The oldest known work of Kannada literature, the Kavirajamarga , a treatise on poetry written in verse, attributed to the Rashtrakuta king Amoghavarsha I , is dated to the first quarter of the 9th century. In the 10th – 12th In the 19th century, poems, epic poems and fables were mainly written by the Jain authors Pampa , Ponna and Ranna . The first prose work on Kannada is the Lokopakara of Chavundaraya from the middle of the 12th century. Important authors of the late 12th century are the Hindu poets Harihara and Raghavanka . During the Vijayanagar Kingdom in the 14th-16th centuries In the 19th century, Kannada literature experienced an upswing through the patronage of the court. The most famous authors of this period are Chamarasa and Kumara Vyasa .

After India became a British colony , Kannada literature dried up. It was not until the end of the 19th century that Kannada literature began to renaissance, drawing on Western influences and introducing new genres such as the novel and the short story . A Kannada-speaking author has won the Jnanpith Award , the most important Indian literary prize, seven times , most recently Girish Karnad (1998) and UR Ananthamurthy (1994).

A local Kannada grammar tradition had developed early on. Their most important works are the Shabdamanidarpana of Keshiraja from the second half of the 13th century and the Shabdanushasana of Bhattakalanka (1604). The first western Kannada grammar appeared in 1820. In the 19th century, it was mainly Christian missionaries who were concerned with the Kannada. Above all, the German missionary Ferdinand Kittel did a great job with his Kannada-English dictionary (1894) and his grammar (1903). 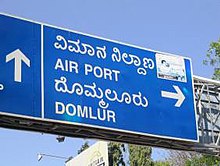 Like many Indian languages, Kannada has its own script, the Kannada script . This is very similar to the Telugu script and belongs to the Indian script family . It shares the common origin of the Brahmi script from the 3rd century BC with the other scriptures of India, Tibet and Southeast Asia . Chr. And a common functional principle: They are an intermediate form of alphabet and syllabary, so-called Abugidas , in which each consonant sign has an inherent vowel a , which can be modified by diacritical marks . Typically for a South Indian script, the Kannada script is characterized by its round shapes.

Kannada has 34 consonant phonemes . The distinction between five places of articulation is typical for the Indian languages : velar , palatal , retroflex , dental and labial . In the case of plosives ( plosives ), voiceless and voiced sounds contrast . Due to the numerous loanwords from Sanskrit, the aspirated plosives (both voiceless and voiced) have acquired phoneme status in the Kannada, so that the plosives occur in rows of four as in the Indo-Aryan languages ​​(e.g. k , kh , g , gh ). There are no aspirated consonants in inherited Dravidian words. In the case of careless pronunciation and in certain dialects, they can be replaced by the corresponding unaspirated sounds. The consonants f and z only occur in younger loan words, for example from English, so they are not always given a phoneme status. The two nasals ñ and ṅ are allophones of n that only occur before the corresponding plosives. In the Kannada script, nasals before plosives are consistently reproduced with the anusvara ṃ , which can stand for m , n , ṇ , ñ or ṅ depending on the following consonant .

There are ten vowel phonemes in the Kannada . The vowels a , i , u , e and o occur in pairs of long and short vowels, respectively. Then there are the phonematic diphthongs ai and au . There is also the vowel / ǣ /, which is limited to English loanwords (e.g. ಬ್ಯಾಂಕು / bǣnku / from English bank ) and is therefore usually not counted as a full-fledged phoneme. In certain dialects, however, it also occurs in real Kannada words.

Almost all Kannada words end in a vowel. A so-called enunciatory vowel u or i is often appended to loan words that end in a consonant (e.g. ಬಸ್ಸು bassu from English bus ). All consonants except retroflex ḷ and ṇ can occur at the beginning of a word. Consonant clusters (succession of two or more consonants) at the beginning of a word only occur in loan words (e.g. ಪ್ರೀತಿ prīti "love", from Sanskrit). Uneducated speakers in particular often add a scion vowel and speak e.g. B. / piriti /. In Kannada, the emphasis is always on the first syllable of a word. So it does not differ in meaning and is also not too strongly pronounced.

Sandhi processes can occur when morphemes come together within a word or among words . Thus, between the root word ಹೂ Hu "Flower" and the Instrumentalsuffix -iṃda a glide v inserted: ಹೂವಿಂದ hūviṃda . If two words are joined together, the unvoiced initial consonant of the second word can become voiced. This phenomenon is mostly not expressed in the scriptures: ಕೆಳತುಟಿ keḷatuṭi , spoken / keḷaduṭi / "lower lip". A phonological process that only occurs in colloquial language is the loss ( syncope ) of a vowel in the second syllable of three- or more-syllable words (e.g. written ಹೆಸರು hesaru , colloquial ಹೆಸ್ರು hesru "name").

Kannada is an agglutinating language and expresses the relationships between words using suffixes (suffixes).

Kannada knows three genera : masculine (male), feminine (female) and neuter (neuter). The gender division is based on the natural gender : the masculine is used for male persons or gods, the feminine for female persons or goddesses and usually the neuter for animals or things. In the case of the stems on -a and the person- identifying stems on -u , the gender can be recognized by the suffixes of the nominative singular: cf. ಸೇವಕನು sēvaka-nu (mask.) “Servant”, ಸೇವಕಳು sēvaka-ḷu (fem.) “Servant” and ಮರವು mara-vu ( neuter ) “tree”.

The nouns in Kannada appear in two numbers : singular and plural . The plural is formed agglutinatively by one of four possible suffixes:

Adjectives can either be simple (e.g. ಒಳ್ಳೆ oḷḷe “good”) or derived from nouns (e.g. ಬಲವಾದ balavāda “strong” from ಬಲ bala “strength”). As an attribute , the adjective always stands in its unchanged root form in front of its reference word, i.e. That is, it is not included in the declination: ಸಣ್ಣ ಮನೆ saṇṇa mane "a small house" - ಸಣ್ಣ ಮನೆಗಳು saṇṇa manegaḷu "small houses". Sometimes the attribute also merges with its reference word to form a compound: ಎಳೆಮಗು eḷe-magu "small child". The personal pronoun of the 3rd person singular is added to an adjective that is used as a predicative or as a noun (e.g. ಈ ಕುದುರೆ ಒಳ್ಳೆದು ī kudure oḷḷe-du “this horse is good”).

In Kannada the verb has three tenses :

Likewise, perfect forms arise from the participle perfect + iru . The past participle is formed:

Together with iru , this creates a perfect (ಬಂದಿರುತ್ತೇನೆ band 'iruttēne “I came”) and a past perfect (ಬಂದಿದ್ದೆನು band' iddenu “I came”).

There are several forms of the imperative :

The fixed sentence order in Kannada is subject-object-verb (SOV). Accordingly, the subject is in the first place in the sentence (it can only be preceded by circumstances of time and place) and the predicate always at the end of the sentence. As is characteristic of SOV languages, in Kannada attributes always come before their reference word, subordinate clauses before main clauses, full verbs before auxiliary verbs and postpositions are used instead of prepositions .

Complex sentences consist of a main clause and one or more subordinate clauses . In general, a sentence can only contain one finite verb. The Kannada has no conjunctions , subordinate clauses as well as parataxes are formed by infinite verb forms. These include the infinitive , the gerund and the participle .

Native grammar divides the Kannada words into four categories. The main criterion is how they relate to the Sanskrit vocabulary. This concept originally comes from the daughter languages ​​of Sanskrit, but was also carried over to the unrelated Kannada.