This article explains the vowel in linguistics, see also vocal music . For a list of the vowel letters see #Vowel letters

A vowel (from latin [litera / littera] vocalis , sounding [letter] '; to vox , voice ') or vowel is a sound , at whose articulation of Phonations current can freely flow out through the mouth widely. Vowels are generally voiced .

Vowel sounds (or vowels; the term overlaps with the meaning “vowel letter”) are phones , i.e. units of spoken language. Letters of the written language such as A , E , I , O , U are vowel letters , they are generally called, as in the Duden , but mostly also "vowels".

The so-called vowel triangle or vowel trapezoid is used to represent all vowels (see illustration). The vowels are arranged in the vertical according to the degree of opening of the oral cavity necessary for their formation, from open (a-sound) to closed (i-, u-sound). In the horizontal plane, they are divided into the front (e, i sounds) or the back (o, u sounds) arising in the oral cavity. Accordingly, they are called front tongue vowels or back tongue vowels .

In many languages, vowels are divided into short or long vowels according to their length ( vowel quantity ). In German the short vowels are relaxed, e.g. B. the [ı] in the middle . The long vowels are tense, e.g. B. the [i:] in rent . But there are also short, tense sounds like the [i] in musicians (cf. Zellerhoff 2011, 275). 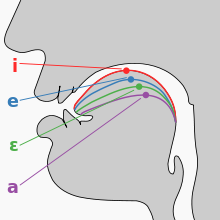 The main vowels related to the position of the tongue. 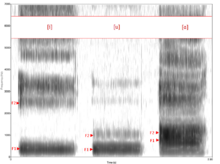 According to the shape of the sound wave, vowels belong to the sounds , in contrast to most consonants .

Vowels have a primary sound. This consists of a fundamental of the fundamental frequency f0, which in turn forms overtones. These are always integer multiples of the root, i.e. H. if you change the fundamental, the overtones always change too.

Through resonances in the vocal tract (or neck tube), i. H. In the glottis, in the larynx and pharynx and in the mouth and nose, pronounced overtone areas arise, so that they become more dominant compared to the other partials. These resonance-enhanced partials are called formants .

Four to five formants can be identified for vowels: F1 and F2 (for vowels that are formed in the front part of the tongue) are responsible for identifying the vowels. So you decide whether we perceive an [ iː ] or a [ uː ], for example .

Measurement of the characteristics of the articulation

The articulation can be reproduced quantitatively using three parameters (formants): F1 indicates the openness or tongue height, F2 the tongue position from back to front, and F3 the rounded lip. A [⁠ i ⁠] for example, has a higher value than a F2 [⁠ u ⁠] , but a much lower value than F1, for example, a [⁠ a ⁠] .

Delimitation to the consonants

If sounds are only classified according to their articulation type, then vowels differ from consonants solely in that the phonation stream in vowels flows almost unhindered through the neck tube (more precisely: In contrast to consonants, the constriction [narrowing] in the articulation space is not so strong that it is a Generated noise). However, this criterion alone does not distinguish between vowels on the one hand and semi-vowel or consonant approximants on the other.

Another possibility is the classification according to acoustic criteria, especially according to their sonority (sound volume). According to this, most consonants are noises without sonority, while vowels and some consonants such as the l, m, n, ng and (in some cases) r sounds are sounds . So these are sonorous.

Sonority or sound volume is an important property with regard to the function of a sound as a syllable carrier : the more sonorous a sound is, the more clearly it stands out from the other sounds surrounding it. Sonorous sounds can therefore be syllable carriers.

In some languages l, m, n, ng , but also r take on the syllabic character and have the main tone, for example l in Plzeň in Czech and r in Krk in Serbo-Croatian .

As far as the sound inventory is concerned, German is relatively rich in vowels. The spoken vowels ( monophthongs ) of Standard German include:

In German there are two types of vowels in stressed syllables:

This pattern is broken in two cases:

Some other vowels that are not listed in the table appear exclusively in foreign words . French was and is particularly productive here , for which German uses the nasal vowels [ɑ̃] (as in orange ), [ɛ̃] ( complexion , mannequin ), [õ] ( contenance ), [ɔ̃] ( jargon ) and [œ̃] ( Perfume ) as well as the long vowel [œ:] ( oeuvre ). The use of the nasal vowels is partly considered educational; Even the pronunciation with a common, non-nasal vowel - usually followed by [ŋ] (e.g. orange [oˈʀaŋʒə], bonbon [bɔŋˈbɔŋ]) - is increasingly perceived as conforming to the norm.

Among other things, the long vowel [ɔː] (Smalltalk) came from English into German.

In the unstressed syllables, German has seven further vowels, which correspond in quality to the corresponding long vowel, but are shorter.

Example: In stressed syllables, the grapheme <e> corresponds to the allophones [e:] (as in single ) or [ɛ] ( nice ). In unstressed syllables - e.g. In B. l e vib rant , G e know - instead of the often short sound [e] will appear (instead of the below-mentioned schwa). Although this situation also occurs with German words (e.g. at home , why , so , before ), foreign words are mostly affected (e.g. direct, debate, physics, economics).

Two sounds occur in standard German exclusively in affixes and reduction syllables: [ ə ], called Schwa ( Blum e ), and [ ɐ ] ( Led er ). They are often not counted among the phonemes and are therefore sometimes forgotten in the representations of the German vowel inventory.

In the by Eva-Maria Krech u. a. published Great Dictionary of German Pronunciation (1982), long and short vowels as well as half-length vowels are listed. Examples are the a-sound in Leda or Oma ; Speaking a really short [and front] a-sound in Grandma , as is common in the Ruhr area, for example, is not perceived as conforming to the norm. Further examples are the half- length e-sound in Káffee (emphasized on the first syllable; if you emphasize the second, you don't speak a half-length, but a really long e-sound) or in meteorologe , demobilize , regeneration , de-escalation (the first e -Loud; half length here in all cases with more than two syllables between themselves and the main stress); the half-length i-sound in words like Omi , Ami , Gabi ; the half-length o-sound in words like Kino , Auto , Eskimo ; the half- length u-sound in words like Akku or Uhu (second u-sound; the first is full length); the half-length ö-sound in foreign words like greening ; the half-length ü-sound in foreign words such as pyroelectricity , hyperboloid or hybridization (also here in all cases with more than two syllables between them and the main stress).

The German vowel inventory includes some peculiarities that defy simple categorization. The sound [ɐ] (as in Led er ), which is a variant of the consonantic [ ʁ ] , already poses problems of classification .

Another problem is the relationship between tense, accented vowels (as in Ofen ) and relaxed short vowels (as in open ). The dispute over which of these distinguishing features is the primary one has led to the emergence of the syllable cutting concept, a syllable- analytical concept that explains such minimal pairs alternatively:

The syllabary concept assumes that neither the quantity (length) nor the quality (tension, "unity") is responsible for the distinction between these two vowel classes. Rather, the basis of the difference is the syllable cut , a prosodic contrast at the end of the syllable that is higher in some words and lower in others. A syllable ends gently if the vowel formation is not influenced by the articulation of any subsequent consonant. In such syllables there are tense long vowels; any post-vowel consonants are only loosely connected. In all other syllables the formation of the vowels is cut off sharply, so to speak, through the articulation of the following consonant; the vowel is then short and relaxed (open); the post-vowel consonant is firmly attached.

Vowels in a language comparison

The English is much poorer in vowel-speaking people (but not to vowel phonemes ) than the German, it has but more diphthongs ( take , go , night , flower , boy , here , there , sure ).

In the Spanish language , more precisely Castilian, only the five vowel phonemes / aeiou / exist. This distinguishes Castilian from the other Iberoromanic languages Portuguese , Galician and Catalan (with Valencian , although the differences to Castilian are smaller here). The a-sound is similar to the German short (open) a, while the i-sound and u-sound are similar to the long (closed) vowels in German. The e-sound and the o-sound of Spanish have a medium height and therefore no exact counterpart in standard German.

The relaxed i-sound (shaped with less muscle tension) (as in wind ), the relaxed ü -sound (as in wishes ), the relaxed u-sound (as in wish ) and the a-like, so-called deep schwa sound ( like the -he written vowel in mother ) is absent in French. Otherwise it has the same oral (mouth-formed) vowels as German plus four nasal vowels. However, French does not recognize the systematic, meaning-changing difference between short, relaxed and long, tense vowels that is typical for German (as in Wahl / Wall, den / denn, him / in, Ole / Olle, pult / Pult, Tönchen / Tönnchen, Probe / filler ).

Vowels are also commonly understood to mean the letters that represent such sounds. In order to prevent the widespread confusion or equation of sounds and letters, it makes sense to use the terms vowel sound and vowel letter .

This assignment is based on the fundamental letter-sound relationships ( grapheme-phoneme correspondences ), which can be determined on the basis of various criteria (frequency, contextuality, uniqueness). In certain contexts, vowel letters can also assume the function of reproducing non-syllabic sounds, and (more rarely) consonant letters the function of representing syllabic sounds. Depending on the definition and demarcation between vowels and consonants (see above) and the status of half-vowels, it can then be formulated that vowel letters also stand for consonants and consonant letters for vowels.

Examples of consonant letters that are not syllable , but are used in semi-vowels: with R in the end of the syllable, especially after long vowels ( more, four, stir ); in the case of J one can generally argue whether the sound represented is more of a semi-vowel or a consonant; also with W the pronunciation can go towards half vowel.

Examples of the rarer cases in which R , J and W are used as syllabic vowels: Centaur, Matryoshka, Rwanda .

In addition, consonant letters can lose their consonant character in certain combinations: e.g. B. in the common ending -er , but also z. B. in the name ending -ow . This also includes the diverse functions of the silent H after vowel letters (as a stretching h , as a syllable-separating h, ...).