The title of this article is ambiguous. Further meanings are listed under Sound (disambiguation) .

A sound is generally a noise or a sound produced by the human or animal voice. The generation and perception of human sounds is the subject of phonetics , in the animal kingdom of bioacoustics .

In general linguistics , a sound in the narrower sense is a defined sound wave produced with the flow of the breath when the speech tools are in a certain position . 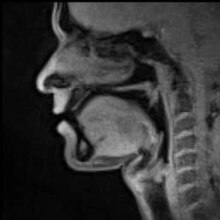 A speech sound or phon is understood as the smallest phonetic unit of the spoken language . The written representation is possible through phonetic transcription . The International Phonetic Alphabet is the standard for this .

In principle, an immense number of sounds can be produced with the human organs of articulation; but each individual language is limited to a certain inventory of sounds. The linguistic sounds present in the languages ​​of the world are combined into different sound groups with regard to their articulation . The following table contrasts the general terms used in the Duden, for example, with an equivalent foreign word: