IPA is a redirect to this article. Further meanings are listed under IPA (disambiguation) . 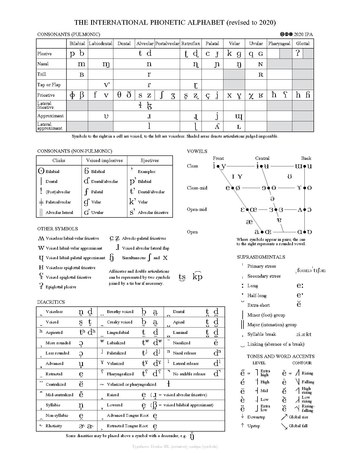 The work of Karl Richard Lepsius , who in 1852 on behalf of the Church Missionary Society proposed an alphabet with the aim of being able to write all languages ​​of the world, but especially African ones without their own writing system , is considered a milestone . A competitor of Lepsius was Friedrich Max Müller (1823-1900). The "standard alphabet" of Lepsius was modified with adaptations a. a. used by the Africanist Carl Meinhof (1857-1944) and by the missionary Karl Endemann (1836-1919), and the phonetic alphabet of the missionary Wilhelm Schmidt (1845-1921) was based on the symbols of Lepsius.

In 1867, Visible Speech, the Science of Universal Alphabetics by Alexander Melville Bell (1819–1905) appeared, which presented a rather abstract, iconic phonetic transcription; In 1877 his student Henry Sweet (1845-1912) published a Handbook of Phonetics in which he again proposed a system based on the Latin alphabet with reference to Bell and Ellis.

The IPA greatly facilitates the representation of pronunciation in dictionaries and lexicons. However, you should also be careful when reading IPA texts:

In some languages, e.g. B. French , there is a generally accepted standard pronunciation ( orthophony ), with others not. An officially established pronunciation can, however, be uncommon in everyday life. The national range of a sound can be much larger (e.g. the German final syllable -er ) than the difference between similar phonetic signs. What is perceived as correct or incorrect in a language, as normal or strange, as understandable or incomprehensible, cannot be measured by someone who has rarely or never heard the language.

A simplified character set is often used in dictionaries in order not to confuse readers with no prior knowledge. Cassell's German Dictionary does not distinguish between the different pronunciations of the German r , nor the more open pronunciation of a short a , i , u and ü compared to the respective long vowel. The pronunciation of the English no is traditionally rendered generally as [ noʊ ], although in British it is actually said [ nəʊ ]. Usually will not take into account that in some languages without sch-volume [⁠ ʃ ⁠] that 's usually more like [⁠ ɕ ⁠] (between s [⁠ s ⁠] and I-sound [⁠ ç ⁠] ) is pronounced, for example in European Spanish and Greek (a phonetically more accurate description is probably generally "withdrawn", that [s], where the Spanish According rather apical is so [s], the Greek, however, rather Laminal , also [s̻]).

Character assignments of the sounds and phonetic character extensions

The IPA character table uses letters from the Latin writing system and the Greek alphabet , partly in a modified form. Each character denotes a sound or describes a sound that has already been specified, which distinguishes one word from another in one language of the world.

The International Phonetic Alphabet is cross-lingual; This means that the assignment of a character to a sound in a certain language is not necessarily identical to the sound assignment of the same character in the IPA. For example, the sign [⁠ ç ⁠] in IPA for the pronunciation of the letters ch "I", although it is the German word foreign to the German orthography; for the illustration of the pronunciation of French , whose spelling knows “ç” as a voiceless “s”, the character is not required.

The special characters of the IPA alphabet were included in Unicode in the range from U + 0250 to U + 02AF.

If the mouse pointer remains next to a character in its table cell, its Unicode value is displayed; if you point to the symbol, you get a short description as a tooltip .

A distinction must be made between different airflow mechanisms for the consonants .

The pulmonary consonants are generated with the outflowing breath (i.e. air from the lungs) ( pulmonary -egressive). Most consonants belong to this group. With ejectives and implosives , on the other hand, the air flow is generated by movements of the larynx. With ejectives, the larynx moves upwards so that air flows out (glottal-egressive); with the implosives it moves downwards, so that air flows in (glottal-ingressive). Clicks (sometimes referred to as "avulsives" or "clicks" in English) are created when the tongue and soft palate form a closed cavity that is enlarged by moving the tongue back and forth. When the cavity is opened, pressure equalization takes place (air flows in, therefore velar-ingressive), so that a sound is generated.

If the mouse pointer remains next to a character in its table cell, its Unicode value is displayed; if you point to the symbol, you get a short description as a tooltip .

Fields with a dark background indicate articulations that are physiologically impossible. For example, a glottal nasal is impossible because if the vocal folds are blocked, no air can escape through the nose, etc.

Of the suprasegmental signs , the stress signs come in front of the syllable to which they refer, the length signs after.

Note: Whether characters with diacritics are equivalents to the respective other character of the articulation type and the articulation location has not been fully determined by the IPA . In the "Handbook of the International Phonetic Association" puts it: "It is debatable whether [ k ] and [⁠ g ⁠] phonetically identical sounds call, and the same applies to [⁠ s ⁠] and [ Z ]. May be in distinguishing between [ k ] and [⁠ g ⁠] or [⁠ s ⁠] and [ Z ] different dimensions involved, which are independent of vocal cord vibration, such as tension against laxness in the articulation, so that the ability to designate voicing separately becomes important. In any case, however, it can be advantageous if one is able to retain the lexical form of a word [...]. "

Characters with a descender can be marked with an overlaid diacritic. By default, however, subordinate diacritics should be used if both options exist.

The IPA is not the only system for notating speech sounds. In the course of time there have been a number of attempts to represent sounds more precisely than with conventional spelling. As early as 1855, the German Egyptologist Karl Richard Lepsius published his standard alphabet "for the representation of unwritten languages ​​and foreign sign systems in a uniform orthography in European letters". In 1863 the work was revised and published in English as well as in German. Contemporary texts on the sounds of human speech show that this standard alphabet was understood as phonetic transcription. Some of its characters have entered the IPA alphabet. For German transliterations (i.e. reproductions of the spelling), his distinction between differently articulated sibilants based on the Czech orthography was adopted, but not in the IPA phonetic transcription.

Alexander Melville Bell , on the other hand, presented an iconic notation in his Visible Speech system in 1867 , in which individual features of a sound (e.g. the roundness of the lips and the like) are represented in the character itself. Other attempts towards an illiterate notation were made by the linguists Otto Jespersen (1889) or Kenneth L. Pike (1943). Because the individual positions of the speaking tools can be specified independently of one another in these systems, sound nuances can be encoded much more finely.

IPA in language technology and the Internet: SAMPA, X-SAMPA and Kirshenbaum

With the notations SAMPA (for 7 European languages) and X-SAMPA (the SAMPA extension for the complete IPA), alphabets were developed by European phoneticians and language engineers as part of multilingual EU research projects in language technology in the 1980s, using their IPA symbols could be written in ASCII code. These notations, which exactly represent the IPA and are very common in language technology, serve the following purposes:

These notations were not designed for the general representation of the IPA in publications, but are often used in technical-scientific publications for data representation. For general publication purposes , including on the Internet, standardized Unicode character sets that are more text output than input oriented are better suited.

Independently of SAMPA and X-SAMPA, the similar Kirshenbaum alphabet was developed by Internet users in the early 1990s, but it did not catch on. In the USA, the "Klattbet" or the "Arpabet" are often used in language technology, primarily for the English language.