This article explains the ritual introduction of outsiders. For the term in molecular biology, see initiation (transcription) .

In ancient times, initiation referred to the admission to the mysteries; B. the Mithras cult and admission to a secret society . In ethnology it is used to denote the maturity celebration or consecration, in which in many cultures, through certain customs, the admission into the circle of fully qualified class or age members of a group is accomplished, often the boys into the society of men. Under initiation , the introduction of an outsider (a candidate, one is neophytes ) in a community or his rise to another personal being state ( status ), for example, from the novice to the nun or the laity to shamans understood. The most important initiation in social history is the puberty and tribal initiation of the tribal society and the initiation of the ancient mystery cults that emerged from it . Initiations follow a traditional rite .

The following important information is missing from this article or section:
Islam is absent from the Abramite religions, Buddhism should be written
Help Wikipedia by researching and pasting it .

In Judaism , 13-year-old boys become members of the Jewish community through the bar mitzvah , the 12-year-old girls through the bat mitzvah . The boys, and also the girls in Reformed congregations, sing a passage from the Torah in the synagogue after they have learned the teamim .

Baptism of a woman in Benin , Africa

The baptism , the confirmation or confirmation and first reception of the Eucharist who is inclusive in nature and are therefore referred to as sacraments of initiation.

The chirqa is a woolen cloak that is usually sewn from individual pieces of fabric and is presented in Sufism to an adept ( Murīd ) when he is accepted into a Sufi order .

Young men in the higher castes of the Hindus are subjected to the so-called Upanayana (initiation rite for boys). It is this ritual act that, according to the Hindus, makes a person “Dvijati”, “born twice”.

In Shinto there is a custom of bringing newborns to their first visit to the shrine, the Hatsumiyamairi , on a specific day . The newborn thereby becomes a member of the community.

The myths and rites (" manhood rituals ") of puberty and tribal initiation are mostly secret, so that details have only been made known in exceptional cases. Essentially, the novice goes through a so-called rebirth everywhere , he symbolically dies by being devoured by a monster, and emerges again born again. An example of this is the scarification ritual at the central sepic in Papua New Guinea . The initiation hut often plays an important role: “Often the initiation hut represents the open jaws of a sea monster ... In some areas of Ceram (Indonesia) the opening through which the neophytes enter is called directly 'snake jaws' ... This is especially true in New Guinea The symbolism of the initiation hut is extremely clear. For the circumcision of the boys a hut is built, which has the shape of the monster Barlun, which is believed to devour the novices ”. The devouring monster is considered to be an image of the “ toothed vagina ” into which the novice must return for the purpose of rebirth.

The depth psychologist Carl Gustav Jung , who had a keen interest in the myths and rites of puberty and tribal initiation, published a whole series of images of the child-devouring “terrible mother” from all over the world. Against this background, the myths collected by Leo Frobenius in his book The Age of the Sun God about the "sun hero" devoured by a monster, including the fairy tale of "Little Red Riding Hood", can be understood. Apparently they all belong to puberty and tribal initiation, they all illustrate some mystical experience of the novices.

Memory Banda campaigned successfully against such rites in Malawi, where she was able to convince tribal leaders and the legislature.

The initiation into the ancient mystery cult goes back to the archaic puberty and tribal initiation that was originally widespread worldwide. The connection can still be seen here and there. The day on which the Roman boys put on the adult's toga at the age of 16 was celebrated as a day of the mystery god Liber or Dionysus / Bacchus. The Eleusis mysteries were part of the Athenian state cult and were organized by royal archons , similarly the Dionysus cult was part of the state cult of the Thebans and Cretans, and the Andan mysteries of Demeter also belonged to the state cult of the Messenians .

As with puberty and tribal initiation, initiation is actually part of the process of so-called rebirth (renatio), and similarly as there, the rebirth rite is strictly secret, so that details are only given in exceptional cases. The oath with which an Egyptian initiate of the cults of Isis and Osiris pledged himself to secrecy: "In the name of the God who separated the earth from heaven, light from darkness, day from night, the world from chaos, the life of death, the becoming of perishing, I swear [...] to keep the mysteries secret [...], and I also swear that if I become a traitor I will be punished ”.

In the 2nd century AD, Apuleius describes the initiation of the novel hero Lucius into the Greek cult of Isis and Osiris . Lucius reports: “The sun lowered itself and brought up the evening […] Perhaps you, curious reader, may ask in some excitement what was said then, what was done. I would say it if I could say it [...] Meanwhile, because pious anticipation may make you tense, I don't want to leave you in agonizing uncertainty. So listen, but believe what is true: I came to the limit of death and crossed the threshold of Proserpine , and traveling through all the elements, I returned (to the beginning of the world). In the middle of the night I saw the sun shine brightly. I went to the gods of the depths and the heights and worshiped them at close range [...] I have now told you what you have heard, but still cannot understand. "

A peculiarity of the Mithras cult is that its small grotto shrines were richly decorated with relief images and sculptures, but there is no sacred history of the cult in written form. The only noteworthy written source is the so-called Mithras liturgy discussed by Albrecht Dietrich . Found among Egyptian magical papyri and perhaps a magical papyrus itself , it explains a picture that occurs in every Mithraeum: This is the scene in which Mithras is said to be fighting the sun god. Albrecht Dietrich interprets this scene as the Mithraic initiation ritual, as it is described in the Mithras liturgy. Like Lucius, the novice of the Mithras cult evidently had a vision of the "all-element" God. The Mithras liturgy represents a journey of the novice to the center of the universe and finally to the god Mithras. On the way he meets the sun god Helios and is "newly created" by him. At the end he sees “coming down God, overwhelming, with a shining face, young, with golden hair, in a white robe [...], holding a golden shoulder in the right hand of a cow, which is the bear star ( Big Bear ), which moves and turn back the sky [...] ”. When he greets the god, his quality as pantheos becomes clear: “Lord, be greeted, ruler of the water, be greeted, founder of the earth, be greeted, ruler of the spirit. Lord, born again, I am departing […]; and since I am exalted, I will die [...] and walk the way you founded [...] and created the sacrament. "

Clement of Alexandria has the confessional formula of Cybele and Attiskultes handed down: "From the tympanum I ate / from the cymbal I drank, / the Kernos I carried around, / I got into the bridal chamber (pastas) down." For Cybele and Attis cult belonged to the so-called Taurobolium . The Christian writer Prudentius (4th century) described the rite: A bull is slaughtered on a kind of grate over a pit. The person to be baptized is in the pit below and can be sprinkled with the bull's blood. But one can also doubt that this taurobolium really belonged to the initiation in general. A bull sacrifice is expensive. It is also only attested in the case of priests who sacrificed the bull for their own good and for the good of the state.

A kind of Cretan bullfight

The Christian writer Firmicius Maternus (4th century) reports on a strange initiation ritual of the Cretans. The custom refers to the sacred story that Dionysus was torn and devoured by the titans as a boy . Firmicius Maternus reports: “The inhabitants of Crete […] organize days of solemn funeral burials and fix an annual (sacrificial) celebration and a religious (initiation) consecration every three years, doing everything in sequence that the boy concludes done and suffered his death. They mangle a living bull with their teeth, which they represent the cruel meal (of the titans) in annual memory; and wailing loudly through the dark forests in confused shouts they imitate the lawn (of the titans?). "

Apparently the custom existed 700 years before, because in the "Cretan fragment" of Euripides tells an initiate of the Cretan Dionysus cult : "A holy 'causes life' I, / since I Myste of Idaean Zeus become / and Shepherd of at night wandering Zagreus . / (I have) served the meal of raw meat --- / and my name is Bakchos , since I / have been sanctified. ”The Cretan fragment seems to prove that the Cretan custom was actually an initiation ritual.

Masonic initiation of a “seeker”
engraving, 1745 in France

Various New Religious Movements and Masonic Orders practice initiations. At Eckankar , the first two of up to twelve initiations are carried out by handing over a personal mantra . In Wicca , new members are accepted into the community through a multi-stage initiation process. Certain ritual acts are carried out and the new member is entrusted with religious secrets. The Mormonism knows the so-called endowment , a full set of ordinances to be kept secret, the first visit of a believer in the temple is made of and on that. 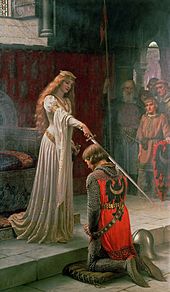 Depiction of an accolade

The accolade is a secular initiation rite in which a nobleman was solemnly knighted .

In Germany , the youth consecration is a secular rite of initiation that is practiced nowadays, especially in the eastern German states .

Some student associations know initiation rites in which members are accepted on probation ("acceptance"). After this trial period of one to four semesters, they are appointed full members from the status of “ Fux ” or “Fox” by means of an initiation called “Burschung” (“Reception”).

Initiation rituals are also common among youth gangs, whereby the candidate usually has to pass a " test of courage " (e.g. theft). Newcomers are also subjected to trials of disgust and violence in order to force their submission . In France these humiliation rituals are called " Bizutage ", in Brazil " Trote ".