Triptolemos between Demeter (left), who hands him ears of wheat, and Persephone (right), who blesses him (votive relief from Eleusis, approx. 440-430 BC, Athens, National Archaeological Museum ) 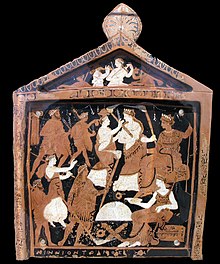 The Mysteries of Eleusis were initiation and consecration rites, which concerned the deities Demeter and Kore and were named after the Demeter sanctuary in Eleusis (today Elefsis ) near Athens . They belonged to the state cult of the Athenians; however, participants from all over the Oikumene were also introduced to the mysteries.

The participants in the mystery celebrations had to keep the events secret under threat of the death penalty and were thereby united in an exclusive circle . They believed that in this way they shared in divine power and benefited from it in the afterlife. Despite the obligation to maintain secrecy, it was possible to largely reconstruct the processes of the celebrations from archaeological finds and traditional texts.

The mysteries consisted of extensive cultic preparations, which were followed by a procession of up to 3000 participants on the holy road from Athens to Eleusis ( Greek "arrival"). During the procession, scenes were re-enacted that depict the stories of Demeter, Persephone and Dionysus .

Pausanias reports in his travelogues:

"The older Greeks honored the celebration in Eleusis so much more than anything else that belongs to piety [...]" 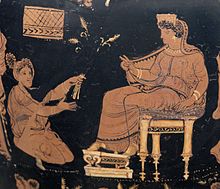 Demeter and Metaneira . Detail on the belly of an Apulian red-figure hydria, around 340 BC Chr. ( Antikensammlung Berlin 1984.46)
→ Main article : Rape of Persephone

The basis of the mysteries is the myth of Demeter , the goddess of life and fertility, and the robbery of her daughter Kore / Persephone by the underworld god Hades . While Demeter looked for her, she neglected her duties; the earth froze and people went hungry - the first winter . During this time Demeter taught Triptolemus the secrets of agriculture . In the end, she managed to get Persephone back, and the earth began to live again - the first spring came . During her abduction, Hades gave Persephone a pomegranate, from which she ate a few seeds, which is why she could no longer stay in the land of the living all the time. A third of the year she was drawn to the underworld, the rest of the year she spent with her mother - this is how the seasons came about (the Greeks only knew three seasons , however , and there was no autumn).

Persephone's return to the world of the living was celebrated with the Mysteries of Eleusis, i.e. the beginning of spring. Since she ate seeds, a symbol of life, during her stay in the underworld, the return symbolizes the rebirth of all plant life in spring and within the larger framework of all life on earth.

In the Homeric hymn to Demeter, King Keleos was one of the original Demeter priests and one of the first to be initiated into the secret rites and mysteries of their cult. The other of the original priests were Diocles, Eumolpos , Triptolemus, and Polyxeinos. Triptolemos, who had received the knowledge of agriculture directly from Demeter, passed it on to the whole people of the Greeks.

Course of the Mysteries

A distinction was made between the Great and the Minor Mysteries of Eleusis. The Little Mysteries, Myesis , were held in the month of Anthesterion (February / March), with the date changing occasionally as needed. The priests purified the candidates for initiation . It was preceded by the sacrifice of a pig; then the priests ritually cleansed themselves in Agrai by bathing in the Ilissos River.

The great mysteries, the Teletai , took place in the month of Boëdromion (= "running for help") (~ August / September), the first month of the Attic calendar . They lasted nine days. To begin with, the sacred objects were brought from Eleusinion to Eleusinion , a temple at the foot of the Acropolis in Athens, on the 14th Boedromion .

On the 15th Boedromion, the hierophants , the priests of the cult, declared the prorrhesis , the official beginning of the rites. The ceremonies began in Athens on the 16th Boedromion with the solemn ablution of the priests in the sea at Phaleron and the sacrifice of a young pig in Eleusinion on the 17th Boedromion.

Two days later, on the 19th Boedromion, the procession back to Eleusis began at the Kerameikos cemetery in Athens . Behind the priests, holding up tablets of Dionysus, the population marched along the sacred road, passing through sections called Bakchoi .

At a certain point along the way, the participants uttered obscenities in memory of the maid Iambe . The maid had managed to distract Demeter from her grief for the loss of her daughter with a rough joke and even made the goddess smile. Also, Iakch 'o Iakche! called, presumably as an allusion to Dionysus.

After the procession arrived in Eleusis, a day of fasting followed in memory of Demeter's fast during her search for Persephone. The fast was ended with the enjoyment of a special drink made from barley and polei mint , the kykeon . In this context, considerations were directed to the question of whether this drink contained psychotropic substances . It was suspected that the potion contained ergot , the toxins of which can have an effect similar to that of LSD .

On the 20th and 21st the mystics entered the great hall, the Telesterion , where they were shown the holy relics of Demeter and the priestesses announced their visions of the holy night. In the center of the Telesterion was the Anaktoron , the palace, which was a narrow stone building to which only the Hierophants had access. The holy objects of Demeter were kept in the anaktoron. The Telesterion events were among the greatest secrets of the Mysteries, betrayal of which was punishable by death.

In the evening the Pannychis followed , a big party that lasted all night and was accompanied by dancing and happiness. The young men destined for consecration danced in the Rharian fields like Dionysus in girls' clothes . The legend went that the fields were the first piece of earth on which grain grew. A bull was sacrificed at night or early in the morning.

On the day after the festival, the 22nd Boedromion, those now initiated honored death with a libation from special containers. The Eleusis Mysteries ended on the 23rd Boedromion, and all the visitors returned home.

There were four types of participants in the Mysteries of Eleusis:

The visitors who accompanied the celebrations and especially the procession along the holy road did not directly participate in the mysteries. Influential figures such as Socrates , Plato , Aristotle , Sophocles , Plutarch and Cicero were also likely among those attending .

Time and end of the mystery celebrations

It is believed that the Mysteries began in Mycenaean times, around 1500 BC. BC, were celebrated. This cannot be proven. If so, they have been held annually for nearly two thousand years. It is certain that the Mysteries of Eleusis became a Panhellenic event during the tyranny of Peisistratus , and believers from all over Greece and beyond took part in the celebrations from then on.

Since around 300 BC The control of the mysteries lay with the Athenian state; two families had particular influence on the event: the Eumolpidae and the Kerykes. This led to an increase in the number of consecration adepts , whose only requirements were not to have blood guilt and not to be barbarians. That is, they were not allowed to have committed murder and had to be able to speak Greek fluently. Men, women and slaves were allowed to receive ordinations as adepts.

Even among the Romans of the upper class, the mysteries were held since the 2nd century BC. Popular. Augustus was initiated into the Eleusinian mysteries, and Claudius reportedly even wanted to move the cult to Rome. Nero , while in Greece, avoided visiting Eleusis, perhaps because he was considered unclean after his mother's murder. Even Lucius Verus and Gallienus could be initiated into the mysteries.

The last Roman emperor to be initiated into the mysteries was Julian in 362 . In 364 the Christian Roman Emperor Valentinian I issued an edict that forbade all nightly ceremonies, but the Roman proconsul and dedicated followers of the traditional cults of gods, Vettius Agorius Praetextatus, prevented its enforcement regarding the Eleusinian celebration :

“But after Praetextatus, the Greek proconsul, a man gifted with great virtue, had explained to him (Valentinian) that a life as a Greek would be impossible under a law that would prevent them from carrying out the sacred mysteries which the great bond of theirs Communion, he allowed the celebration in the usual form, ignoring his own edict and making sure that everything happens in the traditional way. "

The celebrations in Eleusis were finally banned by decree in 392 by the Roman Emperor Theodosius I. Soon after the destruction of the temple in Eleusis by the Goths of Alaric in 395, with Arian Christians among his wake , the mysteries fell into oblivion.

Soon after 400 Eunapius of Sardis reported on the end of the Eleusinian Mysteries in his biography of the Neoplatonic philosopher Maximos of Ephesus . Eunapios himself had been consecrated by the last legitimate hierophant:

“I am not allowed to say the name of the hierophant at the time, since he was the one who initiated the writer. He traced his origins back to the Eumolpids, and it was he who foresaw the destruction of the sanctuaries and the fall of all Greece in the presence of the writer. He also foresaw that after him there would be another hierophant who should not have touched the hierophant's throne, since he was consecrated to other gods and had sworn with unspeakable oaths not to preside over any other ceremonies. And yet he would protrude even though he wasn't even a citizen of Athens! His foresight went so far that he saw that during his lifetime the holy temples would be torn down to the ground and devastated, and that the other would have to watch the ruin and would be despised for his excessive ambition. Before his end, the worship of the goddesses would end, but, dishonored, he would not live long. So it was. As soon as the thespier became a hierophant, who was previously the “father” of the mysteries of Mithras , there was a series of catastrophes that broke in like a flood. [...] Alaric broke through the Thermopylae pass and in front of him Greece lay like a racing track, like a field for equestrian games. The godlessness of the black-clad [monks] had opened the gates of Greece to him in such a way that they moved in with him, but also the repeal of the Eleusinian statutes. "

The Church Father Hippolytus of Rome gives an account of the course of the Mysteries in his Philosophumena . Only vague statements and hints have been handed down from the non-Christian authors of classical antiquity, among others in Pindar , Aeschylus and Sophocles . One of the few who broke the imposed vow of silence was Diagoras of Melos , therefore called the “wicked”; he wrote a book on the Mysteries, but every copy of the book is said to have been tracked down and destroyed.