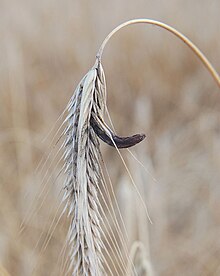 Ears of rye with ergot

The ergot (Latin Secale cornutum ) is an elongated, grain- like permanent form ( sclerotium ) of the ergot fungus (Claviceps purpurea) . The infestation of food and feed grains with this fungus poses a problem for humans and animals, because the alkaloids and dyes contained in ergot are highly toxic . However, ergot can also act as a remedy in dosed quantities . Rye is the most frequently affected food grain, but also the grains triticale , wheat , barley , oats and spelled used as fodder . Over 400 grasses in total are at risk of infestation; also the salt silt grass ( Spartina anglica ) found on the North Sea coast .

Botanical illustration of the ergot ear of wheat

The ergot fungus produces poisonous alkaloids , the ergot alkaloids . They are characterized by an ergoline structure. Ergotamine , ergometrine and α- ergocryptine belong to the ergot alkaloids . The alkaloid content is 2 grams per kilogram of ergot. In addition, red anthraquinone pigments such as endocrocin or clavorubin could be isolated from ergot , with 5 grams of anthraquinone pigments in one kilogram of ergot. From these, yellow xanthone derivatives (ergochromes) are finally formed biosynthetically . The connection between dye and alkaloid synthesis was researched by the chemist Burchard Franck .

The toxic effects of ergot alkaloids include intestinal cramps , hallucinations as well as the death of fingers and toes due to circulatory disorders , which characterize the clinical picture ergotism (also Antonius fire or ergot burn ). 5 to 10 grams of fresh ergot can lead to respiratory paralysis and circulatory failure in an adult and can be fatal . The ingredients (especially ergometrine ) stimulate labor . For this reason, the mushroom was also used for abortions , for which it is not suitable because of its limited therapeutic range . The alkaloids can also be used medicinally , for example to stop bleeding after childbirth , against orthostatic hypotension (low blood pressure and dizziness after getting up) or migraines . Lysergic acid can be extracted from the mushroom , from which the psychedelic LSD can be produced. According to Hofmann and Wasson (1978 The Road to Eleusis ), however, it was already known 2000 years before Christ that only the naturally present psychoactive lysergic acid alkaloids were water-soluble, and intoxicating drinks were brewed with them that bypass the undesirable effects of the other alkaloids.

The modes of action of ergot alkaloids in the metabolism of humans and animals are highly complex. The Association for Grain, Market and Nutritional Research divides the contamination (for grain in% by weight, for flour in µg total alkaloids / kg) into the following safety levels :

No-toxic-effect-level
For humans, up to 0.1 mg / kg body weight is given as the maximum beneficial daily dose. This corresponds to (with a body weight of 25 to 75 kg): 0.5 to 1.5% ergot in the grain, or 10 to 30 mg total alkaloid / kg flour.
In contrast, the Federal Institute for Risk Assessment considers total mother grain alkaloid quantities of well below 10 mg / kg flour to be suitable for causing health damage.
No problem level
0.1% and 2 mg / kg, respectively. This value is reported in the scientific literature largely consistent and is also known as limit in the feed - Regulation set.
No intervention level
Orientation or intervention value, but not: maximum value. In the EU regulation for the purchase of intervention grain , a value of a maximum of 0.05% or 1 mg / kg is specified as a quality criterion.

In agriculture , ergot infestation can be prevented by:

Ergot infestation occurs when there is not enough pollen while the rye is in bloom. Damp weather during the flowering period means that it is difficult for the pollen to fertilize the grain to reach it. As a result, ergot spores can occupy the still open rye flowers. In ascending order, however, the location, crop cultivation and choice of variety are more influential for ergot infestation. The infestation can first be recognized by the formation of honeydew on the flowers. These little yellowish sticky drops are often overlooked by the farmer . Then the actual ergot develops. In rye, it is dark purple , oblong and can be up to 6 centimeters long. Inside, the mother kernels are initially cartilaginous and harden more and more over time.

Since the consumption of uncleaned , raw grain carries the greatest risks, it is recommended that only cleaned grain be consumed. Cleaning removes the sclerotia (permanent organs of the fungus, mother grains ) from the harvested crop. The Federal Institute for Risk Assessment (BfR) published an analysis in 2004 on the risk of rye flour as an example .

Ergot can be in the mill according to shape, size and specific weight z. B. be removed by sieves, aspiration , trieure and table separators . Lately it has been possible to remove it using a color reader . The latter is the most reliable method, especially when the ergot is no larger than the grain or in fragments. However, it is associated with high investment costs for the color reading devices. As a rule, therefore, only large mills have this type of equipment. Together with the ergot, good grain is also separated out in the cleaning process, with modern color sorters there is roughly the same amount of ergot as good grain, with table separators a little more good grain than ergot.

The term "Mutterkorn" (German since the 18th century) is possibly related to the old popular names "Kornmutter" and "Roggenmutter" for winds that make cornfields sway. These winds should cause "ergot" to grow there. Since the 15th century at the latest, ergot has been used to treat abdominal pain, which was seen as a result of the “rising of the (giver) mother”. The name meaning was then interpreted as derived from "uterus".

A connection between ergotism and "ergot" was only formulated around 1630.

LSD and the Mysteries of Eleusis

The chemist Albert Hofmann produced LSD for the first time in 1938 during his research on ergot with the aim of developing a circulatory stimulant. R. Gordon Wasson led in 1978 with Albert Hofmann and Carl A. P. jerk the Eleusinian mysteries to the use of psychoactive ergot alkaloids back.

In the Antoniter Museum in Memmingen there is a worldwide unique permanent exhibition on the ergot brandy, which the Order of the Antonites treated many patients here around 500 years ago.

On the initiative of the Antonites there is also the Isenheim Altarpiece . By looking at and praying in front of the altar, the believers afflicted with ergot poisoning (called Antonius fire) in the MA should experience healing.