This article deals with substances that are harmful to organisms from a low dose. For further meanings, see Poison (disambiguation) .

As poison ( medium high German pollutant , althochdeutsch handover ) or toxic substance is referred to a material , the living things on their metabolic processes , by penetration into the organism of a certain, low dose may cause damage. As the amount of exposure to an active ingredient increases, the likelihood that health damage will occur through poisoning increases . From a certain dose range onwards, almost every substance can be classified as poisonous ( toxic ).

The scientific discipline that deals with the study of toxic substances, their effects in different dose ranges and the treatment of poisoning is toxicology . It deals with substances, mixtures of substances, animals, plants and microorganisms and with the biochemical mechanisms of toxic effects in relation to quantitative aspects.

As hazardous substances , poisons are divided into very toxic and toxic as well as harmful to health (formerly less toxic ), depending on the amount of action .

The skull with crossed bones ( ☠ ) is the traditional icon for poison.

Historical permit to purchase poison (around 1910)

The word poison is a Germanic abstract formation ( * gef-ti- ) with a t suffix - and the resulting change from b to f - the Indo-European root of the word give . The original meaning "gift, present, donation", which poison still had in Goethe , has now disappeared in German (while it lives on in English "gift") and has only been preserved in the dowry ("marriage property of the bride, trousseau") .

The change in meaning from “gift” to “deadly gift, poison”, first documented in Old High German by Notker , is later influenced by the Greek-late Latin word dose , which means gift, “gift, certain amount of medicine”, but also as a covering ( euphemistic) expression for "poison" is used.

But even the Greek expression pharmacon in Homer stood for both the healing effect and the harmful effect of a substance and in Galenos there are medicines ( pharmaka ) whose effect as a poison depends on the dose.

Poison retains the originally feminine gender in both meanings for the time being, then becomes a “harmful substance” first masculine (beginning of the 15th century), later neuter (mid-16th century). The latter became more and more popular in the 18th century, but Schiller wrote in Kabale und Liebe in 1784 (5th act, 7th scene): I still don't feel the poison .

In general, there is a difficult distinction between pollutants and toxins .

Toxins or waste products excreted by living beings are called toxins in toxicology . Pathogenic bacteria cause damage through the effects of their toxins. The characteristic clinical pictures in bacterial infections are caused by the action of bacterial toxins.

Toxoids are detoxified (inactivated) toxins, but they can still trigger an immune response in the vaccinated body. Toxoid vaccines are used in vaccinations against diphtheria and tetanus .

Viruses are pathogens , but they are not toxic themselves. Substances or objects that only damage a living being mechanically or through radiation are also not considered poison.

The tolerance of a substance is different for many living beings or groups of living beings. In principle, all substances supplied to the organism above a certain dose can cause damage and are therefore to be regarded as toxic from this effective level. Paracelsus wrote in 1538: “All things are poison, and nothing is without poison; the dose alone makes sure that a thing is not poison. "

Toxicity is a measure of the harmful or lethal effect of a chemical substance or a physical effect (e.g. radiation; ionizing radiation, radiation exposure) on a living organism. A distinction is made between acute toxicity, which has an immediate effect, chronic toxicity, in which damage only occurs after a long period of exposure, and ecological toxicity (ecotoxicology), which has an impact on entire populations or ecosystems. The acute toxicity is determined by the amount (dose) of a poison required on average until a certain toxic effect is achieved, given either as the amount of poison per kg of body weight or in the form of a concentration-time product ( Haber's product ) in mg min −1 m - 3 . Chronic toxicity describes the toxic effects of a substance with long-term regular application of a certain dose. The enrichment (accumulation) of many pollutants in the air and soil falls under the field of ecotoxicology.

The absolute magnitude of the toxicity (toxic dose) depends on a number of factors. The most important are the type and location of the poison application ( inhalation , oral , subcutaneous or percutaneous , intramuscular , intravenous or intraarterial , intraperitoneal, etc.), the application vehicle (e.g. solvent), the physical condition of a living being (type, age and gender , individual characteristics of the living being, predisposition , state of health and living conditions) and chronobiological factors (time of application). In order to be able to compare toxicity information, these parameters must therefore always be given.

Nanotoxicology deals with the effects of nanoparticles, including nanomaterials, on living organisms. Due to miniaturization, nano-objects sometimes show significantly different physical and chemical properties compared to their original material. The smaller a particle, the greater its toxicity. Nanoparticles can cause bronchial and pulmonary inflammatory reactions , and pulmonary fibrosis has also been described in isolated cases .

The effects of toxic substances can be partially neutralized or mitigated by natural or artificially produced antidotes .

Poisons attack different receptors in the organism. Often affected organs in acute poisoning are the liver ( hepatotoxins , e.g. from paracetamol ), kidneys ( nephrotoxins ) as well as the brain and nerves ( neurotoxins such as botulinum toxin and warfare agents such as VX , sarin or soman ). Some toxins affect internal respiration , such as nitrites and carbon monoxide , which block hemoglobin , or potassium cyanide (cyanide), which blocks the cells' respiratory chain .

In order to be able to compare the toxicity of toxins with one another, animal experiments are used under standardized conditions. The frequently given LD 50, for example, indicates the amount of substance, based on body weight, which leads to death in half of a test animal population. LD stands for lethal dose .

Some of the most well-known toxins are grouped under the collective term botulinum toxin , and they can be found in spoiled canned meat and fish or in cheese.

According to the behavior of the toxin at the receptors, two types of toxins are distinguished:

Toxic substance as a hazardous substance

While generally toxic pollutants as dangerous for the environment are classified (N) pulps are sent to the effect on people as hazardous substances in very toxic (T +), toxic (T) and harmful classified (Xn) (obsolete "less toxic").

The regulations are EU-wide compliant. According to the Swiss Poison Act, the classification into poison classes was made , but the EU hazard symbols have also been in effect since 2005 .

As a toxic substance wear toxins typically the R-sets 20-28 ( Harmful / Toxic / Very toxic by inhalation / in contact with the skin / if swallowed ), R29, 31, 32 ( toxic gas on contact with other substances), as well as R50–59 (dangerous for the environment ). But a number of other R-phrases also describe toxic effects in a medical or legal sense (irritant effect, cancer risk, genetic damage, ...).

A list of the toxic and very toxic substances described in Wikipedia can be found in the category: Toxic substance .

According to the prevailing view, a poison is any organic or inorganic substance which, according to its type, the amount introduced, the form in which it was introduced and the nature of the victim's body, is likely to damage the health through chemical or chemical-physical effects.

Taught is a poison when a body fabric relationship was prepared.

The legislature expressly refers to the classification as a hazardous substance (e.g. Section 3, Paragraph 1, Item 6 and 7 of the ChemG 1996 , Austria), whereby substances designated as harmful are also included in particular (e.g., Section 35, Item 1 of the ChemG 1996). According to both the chemical laws and the hazardous substance ordinances, a sufficiently well-founded suspicion of toxicity is enough to classify a substance as a poison .

Bringing poison is punished (in Germany according to Section 224, Paragraph 1, No. 1 Alt. 1 StGB ) as dangerous bodily harm .

Table of the LD 50 values ​​of some substances in different types: 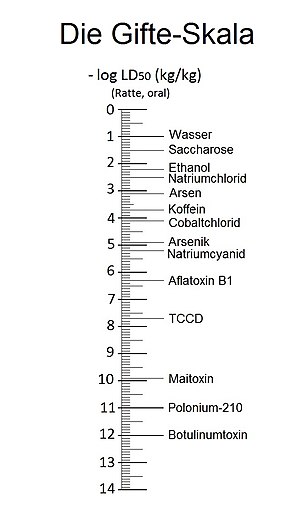 The LD 50 values ​​have a very wide range. The botulinum toxin as giftigster known material has a LD 50 ng value of 1 / kg, while the fabric ungiftigste water a LD 50 value of greater than 90 g / kg did. That's a difference of about 1 in 100 billion, or 11 orders of magnitude. As with all measured values ​​that differ by many orders of magnitude, a logarithmic view is recommended. Well-known examples are the indication of the earthquake strength using the Richter scale , the pH value , as a measure of the acidic or basic character of an aqueous solution or the volume in dB . In this case, the negative decadic logarithm of the LD 50 values, which is given in standardized form in kg per kg of body weight, is used.

The dimensionless value found can be entered on a toxin scale. Water as the most important substance has the catchy value 1 in the toxicity scale obtained in this way.

Toxins are poisons that are synthesized by living things.

Poisons produced by the human organism: