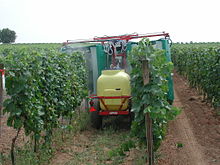 Pesticide (from Latin pestis lat, scourge ',' Plague and. Caedere , 'kill) is from the English language acquired designation for chemicals and microorganisms with a nuisance or harmful prestigious living things , viruses and viroids killed, sold or in Germination , growth or reproduction can be inhibited. In general, this refers to substances that are manufactured and used by humans. In English, the terms natural pesticides and dietary pesticides are coined to denote food poisons produced by plants .

Pesticides can be divided into:

In the classic understanding , pesticides are means for combating animal pests ( English pests ). In this sense, the term was mainly used in English-speaking countries. The pesticides were sometimes equated with the insecticides .

As a pesticide according to current understanding , all are pesticides and other means of pest control construed. The US Environmental Protection Agency also defines the term in this sense. The EU Directive 2009/128 / EC contains a definition of “pesticide”, according to which both plant protection products as defined in Regulation (EC) No. 1107/2009 (Plant Protection Products Regulation) and biocidal products as defined in Directive 98/8 / EC through the placing of biocidal products on the market. Medicines that are used in livestock farming also meet all of the definitional requirements for a pesticide.

When “pesticide residues” are mentioned in the public discussion, the focus is usually on the contamination of food with pesticide residues. The term “pesticide” has a predominantly negative connotation in common usage. In 2003, Christel Fiebinger stated that the public associates the term with the “poisoning of soil, plants and food” and has partly become a “battle term against the farmers”.

In the legal texts of the German-speaking countries and the German versions of the relevant EU regulations, the term “pesticide” is rarely used. The approval of active substances and their maximum quantities for the approval of plant protection products and biocides are regulated in separate regulations. A certain active ingredient can be present in various plant protection products as well as biocides and veterinary medicinal products.

Substances that are no longer permitted in the EU , such as B. Cyanamid , acetochlor , tepraloxydim and cyfluthrin , may be prepared as before and exported to. This also happens in Switzerland z. B. with atrazine , diafenthiuron , methidathion , paraquat and profenophos .

Pesticides can be classified as follows:

Important physico-chemical properties of pesticides are:

The way pesticides work is different. You act u. a. as growth inhibitors, inhibitors of protein synthesis or change the permeability of cell membranes and thus impede the conduction of excitation. In some cases, the transmission of excitation to synapses is also disturbed. Depending on the active ingredient and excipient , the preparations can cause greater or lesser damage to non-target organisms or ecosystems . E.g. Ivermectin, which is used globally in livestock farming (e.g. against gastrointestinal parasites), causes considerable damage to non-target organisms. In this case, a number of manure-degrading and manure-visiting species (including flies , beetles ) that come into contact with excreted, toxic metabolites of the active substance on the cattle manure are inhibited or killed . On the other hand, a large number of target species for nature conservation depend to a greater or lesser extent on vital dung fauna as a food source (e.g. great mouse-eared mouse , hoopoe , blue roller ).

According to the Helmholtz Center for Environmental Research, modern pesticides damage the insects in a dose that is 100 times lower than that indicated in the approval. Pesticides can be detected in the air and are blown away over long distances . In many small streams , strong pesticide loads were repeatedly measured, which in some cases far exceeded the permitted limit values. Even in bird sanctuaries , pesticides are legally used, such as B. in the Moritzburg small peaks landscape . There is z. B. the partridge disappeared since 2008. In addition to the active ingredient used, the different application methods and application rates can significantly influence the undesirable effect on the environment and (if any) people. Target organisms of the pesticides can develop resistance to the active ingredients more or less quickly .

According to research by the European Food Safety Authority (EFSA), there is little likelihood in Europe of citizens being exposed to pesticide residues in food, which can lead to negative health effects. According to the authority's annual report, which is based on the analysis of around 88,000 samples from 28 EU member states, almost 96% of the food samples contain no pesticide residues or only show traces that are within the legally permissible values.

The insecticide chlorpyrifos is toxic to both humans and animals, especially amphibians .

Alternatives to the use of pesticides

Due to the diverse and sometimes difficult to predict potential damage to ecosystems, non-target organisms and humans, the use of pesticides is sometimes a controversial political issue. The question of the alternatives is therefore also important. In integrated pest management , pesticides should only be used as a last resort . Here biological pest control plays an important role. The target organisms are fought using natural antagonists (e.g. parasitic wasps), which cause significantly less or no damage to ecosystems or non-target organisms.

In September 2014, the church declared several times in the Italian Vinschgau (South Tyrol) by popular vote for "first pesticide-free community in Europe." Building on this, the Austrian author and documentary filmmaker Alexander Schiebel published the book The Miracle of Mals - How a Village Defies Agricultural Industry in autumn 2017 and the documentary of the same name at the end of May 2018. After 130 farmers filed a lawsuit against the Mals ban, the municipality suspended the ban. In autumn 2019, the Bolzano Administrative Court lifted the ban because the municipality was not responsible for this question.