Viroids are the smallest known infectious subcellular pathogens with a genome , 80 to 100 times smaller than the smallest viruses. They do not count as living beings ( organisms ) because they do not have their own metabolism and can only multiply within living cells. Viroids generally have the ability to control their replication and the ability to evolve .

All known viroids are inhabitants of higher plants and mostly cause diseases, the economic significance of which for humans is very different. Some of them are important plant pathogens in agriculture . The American Phytopathological Society has (in a compilation of the most important milestones of the past millennium in plant pathology published in 2000) recognized Theodor Otto Diener's discovery of viroids in 1971 as one of the ten most important pathogen discoveries of the millennium.

Theodor O. servant in front of a TEM image of the PSTVd (short rods), and for comparison, a double-stranded bacteriophage - DNA (long loop)

Efforts to isolate and characterize the causative agent of spindle tuber addiction in the potato plant led to the discovery of the first viroid . This disease was first observed in potatoes in the US states of New York and New Jersey in the early 1920s . The infectious nature of the disease was recognized in 1923 by Eugene S. Schultz and Donald Folsom , but the particular nature of the pathogen initially remained unknown and it was assigned to the plant viruses .

The plant pathologist Theodor O. Diener, who works at the Pioneering Laboratory for Plant Virology of the Agricultural Research Service in Beltsville, Maryland, succeeded in 1971 in isolating and characterizing the pathogen as an RNA that was unusually small, protein-free and independently replicating at the time of knowledge . Diener suggested the name Viroid - that is, virus-like - for this group of pathogens.

In the years that followed, servants and other groups elucidated many of the molecular properties of viroids. In 1971, Stollar and Diener were able to use immunological tests to show that viroids are not double-stranded but single-stranded RNA and that no viroid-specific RNA- DNA hybrids exist. Sogo et al. investigated viroid RNA using electron microscopy in 1973 and confirmed the single-stranded nature of RNA and the circular secondary structure of RNA.

Heinz L. Singer et al. were able to prove the structure of the viroids as covalently closed , single-stranded RNA rings with specific base pairings within the RNA strand in 1976 at the Institute of Virology at the Justus Liebig University in Giessen . Henco et al. detected helically wound sections within the RNA ring, with which the special energetic stability of the RNA could be explained. In 1978 Hans Joachim Gross et al. the first nucleotide sequence of a viroid - the PSTVd. Since then, viroids have been named with the usual three- or four-digit abbreviation to which a “d” is added - PSTVd ​​for Potato Spindle Tuber Viroid.

Viroids only consist of a single-stranded ribonucleic acid (RNA) closed in a ring . In contrast to viruses , viroids have no additional proteins or lipids for packaging in the form of a shell or capsid . Viroids can only multiply within living cells ( obligatory intracellular parasites ), which is why they form the group of subcellular pathogens together with viruses, virusoids and prions . For viroids, together with viroid-like satellite RNA, the International Committee for Taxonomy of Viruses (ICTV) has defined a separate classification of subviral pathogens .

The RNA of the viroids is between 241 and 401 nucleotides long. Typically, no mRNA is transcribed from this genomic RNA during multiplication in the cell , and thus no viroid-specific proteins are produced. The viroid RNA has its own catalytic activity, among other things in the form of a ribozyme . The mechanism of RNA replication and interaction with cellular components is a model for studying the functionality of RNA in the cell. These mechanisms of the viroids are considered by many to be a molecular fossil from an early stage in chemical evolution . 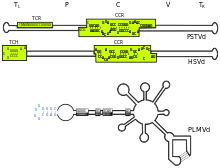 The RNA of the viroids contains many complementary areas, as a result of which double-stranded, linear structures are formed, which can be observed under the electron microscope as rod-shaped structures about 50 nm long.

Unlike viruses, viroids do not encode proteins . This is why they are exclusively dependent on enzymes from the host plant for their replication and transport . This fundamentally distinguishes viroids from satellite viruses , which rely on helper viruses to replicate .

The replication takes place via rolling circle replication by the cellular RNA polymerase II , which normally uses DNA as a template. The mutation rate in the replication of viroids is the highest among all nucleic acid - replicon . Due to the inaccuracy of replication, viroids occur as quasi-species within an organism . However, many mutations have an impact on infectivity and pathogenicity . The rolling circle replication creates a long strand of RNA from several serial copies of the genome (a multimer ), which is presumably only cut into the individual genomes by the cellular RNase ( DCL1 and DCL4 hydrolyze Pospiviroidae, DCL2 and DCL3 in all viroids) ( to the monomer ). The viroids from the Avsunviroidae group can also hydrolyze autocatalytically . The ring closure of the newly generated viroid RNA is presumably carried out by a cellular DNA ligase , which normally uses DNA as a template. In Avsunviroidae, ligation is autocatalytic.

The hepatitis D virus (HDV) has ribozyme activity similar to that of viroids.

The exact mechanism by which the viroid RNA has a pathogenic effect on plants is not yet known. Various models have been proposed (e.g. RNA silencing ). An overexpression of a non-infectious shRNA with a specific sequence of PSTVd leads to similar symptoms such as infection with PSTVd. In addition, a partial sequence of the PSTVd ​​is complementary to certain mRNA from plants. During an infection with viroids, short RNA fragments ( vd-sRNA ) are formed in the course of the plant's defense against the viroid by Dicer -like and AGO -proteins of the plant . These short fragments weaken the host plant's resistance .

Viroids are transmitted mechanically or through a smear infection , especially after injury, but also through pollen and seeds, the proportion of the transmission routes being unknown. If the plant is co-infected with PSTVd ​​and the potato leafroll virus ( PLRV , a polerovirus ) or the velvet tobacco mottle virus ( VTMoV , a sobemovirus ), the transmission of PSTVd ​​is increased, presumably by packaging the viroid in the virus capsid. In addition, it was suspected that it was transmitted by green aphids (Aphididae) or bumblebees . The spread within a plant occurs via plasmodesmata . The infection is lifelong ( persistent ).

On the basis of sequence comparisons of already characterized viroid RNAs (currently 29 species and a large number of variants) and their different catalytic and structural properties, the viroids are divided into two virus families and eight genera. The prototypical representative of the Pospiviroids is the PSTVd ​​and that for the Avsunviroids is Avocado sunblotch viroid (ASBVd). While Pospiviroids replicate in the cell nucleus , Avsunviroids arise in the chloroplast .

In contrast to real viruses, the official names of the viroid taxa have “viroid” instead of just “vir” as part of the name ending, the abbreviations end in “Vd” instead of “V”, possibly followed by a number (not Roman , but Arabic). As of ICTV November 2018, the following ranks are in use:

The taxonomy is in detail as follows:

Viroids occur only as pathogens in vascular plants ( plant pathogens ). Viroids cause over 30 diseases of vascular plants. The infections affect many different cultivated plants , and depending on the environmental conditions and host- pathogen ratio , the resulting disease may either not break out or break out only mildly, or it may lead to severe damage and death of the plants. The economic damage caused by viroids mainly affects potato plants, tomatoes, citrus fruits, grapes, hops and ornamental plants. Viroids have not yet been discovered in animals. A typical example is the potato spindle tuber viroid Potato Spindle Tuber Viroid (abbr. PSTVd), which affects potatoes, tomatoes and many other plant species and causes great economic damage.

Individual viroids are identified via a Northern blot with a hybridization probe and increasingly also via RT-PCR and qRT-PCR . Therapy consists of the exclusion or eradication of the infected plants.

The tenacity of the viroids depends on the strain. PSTVd ​​is inactivated by repeated freezing and thawing . Viroids are generally sensitive to bleaching agents , chaotropes in higher concentrations and denaturation by heating, whereby the structure of the viroids is stabilized by divalent magnesium ions and the denaturation temperature increases by up to 30 ° C depending on the concentration.