Pathogen is a redirect to this article. For the melodic death metal band see Pathogen (band) . 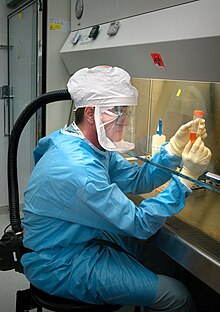 Pathogenicity ( retronymes portmanteau word from Greek πάθος pathos "suffering, disease" and γένεσις genesis "generation, born". See -genese ) is the fundamental ability of infectious agents ( bacteria , parasites , viruses , prions , toxins ), in certain organisms diseases to evoke. The adjective to is pathogenic (disease-causing potentially sickening), the opposite is non-pathogenic (non-disease-causing). Pathogens also with the noun (the) pathogen called. The extent of the pathogenicity (ability of the pathogen to multiply and the intensity of the toxin formation) is referred to as virulence , without a uniform measure being defined for it.

Pathogenicity is characterized by the toxicity and aggressiveness of a pathogen. The aggressiveness consists of the penetration, whereabouts and multiplication of the pathogen. For example, Clostridium tetani or Corynebacterium diphtheriae are not very aggressive, but very toxic, while Streptococcus pneumoniae is only slightly toxic. Pathogens are divided into four risk groups according to their hazard potential for humans . The work with them takes place in the corresponding biological protection level (English Biosafety Level ), with BSL-1 for activities with non-pathogenic up to BSL-4 for activities with highly pathogenic pathogens.

In a narrower sense, pathogenicity describes the ability of a pathogen (a parasitic organism such as bacteria , fungi , protozoa or parasites ) or parasitic molecules ( viruses , viroids , transposons , prions ) to damage a particular host through its acquisition of resources. Its opposite is apathogenicity , i. H. such an organism or substance does no harm to the host, it is apathogenic for the host . Pathogenicity is primarily a property of the pathogen, but only arises in contact with a host. Pathogenicity is increased by weakened hosts, e.g. B. when infected with Pneumocystis carinii or Cryptosporidium in patients with immunosuppression , intensified.

Various measures of pathogenicity can be determined experimentally, for example the minimum infectious dose ( i.e. the minimum dose at which a host becomes ill), the lethal dose (the dose that leads to certain death), the lethality at a certain dose of a pathogen ( i.e. the percentage of sick people who die at a certain dose), as well as the epidemiologically determined contagion index (how contagious a pathogen is) and the pathogenicity index (how many symptoms and to what degree the pathogen produces).

Other occasionally occurring properties are transmission (but not with Cryptococcus neoformans or some zoonoses ), adhesion , immune reactions of the host's own immune system , immunological escape mutants , mechanisms for immune evasion , a pathogenicity caused by the immune reaction (immunopathogenesis, e.g. the destruction of the lymph nodes in HIV , Arthus reactions with streptococcal infections or Tyrosis in tuberculosis ) and also changes in behavior of the host (eg. B. Yersinia pestis in fleas, Toxoplasma gondii in rats, the rabies virus in various mammals, the small liver fluke in ants or Polydnaviren at wasps prey). The property to kill (see mortality and mortality ) is given not all pathogens, some examples of which are human papillomavirus , herpes virus , adeno-associated virus , or rhinovirus .

The virulence of bacteria depends, among other things, on the existence of toxin proteins, which can also be part of a toxin-antitoxin pair. An association of virulence with an entire bacterial species only makes sense if there are no strains without virulence.

One observation in the pathogenesis in natural hosts is that pathogens adapted to the host usually do not harm it very much because they need it for their own development and the immune system is activated by cell damage and apoptosis , which in turn has a lowering effect on the virus concentration. Avoiding an immune reaction facilitates replication and transmission (synonymous with transmission ) to other hosts. For example, herpes simplex viruses reach infection rates (synonymous with contamination ) of over 90% of the German population with less pronounced symptoms. The simian immunodeficiency virus does not produce AIDS in its natural hosts , unlike HIV in humans. In contrast, infections with the Ebola virus in humans, but not in their natural hosts, are occasionally self- extinguishing due to their high virulence before efficient transmission takes place, since the host is severely weakened and soon dies, consequently its range of motion and thus its spread the virus is limited. A severe course of infection with high mortality (see lethality and mortality ) is usually an indication that the causative pathogen has not yet adapted to the organism in question as its reservoir host. However, the transition from pathogens with a high level of replication (and damage caused) to a permanent infection rate ( Infect and persist , avoiding damage) is fluid. In other words, adapted infectious objects tend to persist and a regulated rate of reproduction, while less adapted pathogens tend to lead to premature termination of the chain of infection . Among other things, bacteria use quorum sensing for this . Exceptions are e.g. B. H5N1 viruses in birds, Yersinia pestis and human smallpox viruses , which despite their prolonged occurrence claim comparatively high numbers of victims. Evolution also occurs in the host in response to a pathogen. This evolution is described in the gene-for-gene hypothesis . However, the adaptation usually takes place on the part of the host, since the pathogens compete with their conspecifics for resources and a less reproductive pathogen would perish more quickly. Therefore, a reduction in pathogenicity in pathogens occurs primarily in connection with an increased rate of reproduction.

The adaptation of the host to the pathogen is referred to as host restriction or host resistance . Known antiviral and antibacterial mechanisms in humans include e.g. B. the myxovirus resistance factor Mx1 , the PAMP receptors , the dsRNA-activated inhibitor of translation DAI, the melanoma differentiation antigen 5 ( MDA-5 ), the oligoadenylate synthase OAS1 , the Langerin , the tetherin , the SAM domain and HD domain 1 protein ( SAMHD1 ), the RIG-I , the APOBEC3 , the TRIM5alpha , the protein kinase R and the RNA interference . In addition, there is the immune response . Without pathogens, the evolution of the immune system would not be necessary. Plants have developed other mechanisms to defend themselves against pathogens.

The trade-off hypothesis assumes that virulence is an unavoidable consequence of transmission. In the malaria pathogen Plasmodium sp. a decrease in transmission with increased virulence was observed.

The short-sighted evolution hypothesis describes virulence as an unavoidable consequence of mutation and selection of a pathogen when adapting to its direct host, without reference to other and later possible hosts. Meningococci , poliovirus and HIV are cited as examples .

The coincidental evolution hypothesis assumes that virulence is independent of transmission, i. H. the virulence arises for other reasons and is only a side effect. Examples are the toxin- forming soil bacteria Clostridium botulinum (forms the botulinum toxin ) and Clostridium tetani (forms the tetanus toxin ), to which the toxin does not provide any advantage in their normal habitat.

Classification according to host range

The term psychopathogenicity is used less often in connection with controversial content and dogmas of various religions and ideologies. In analogy to pathogenicity, the term here describes the property of such content to have a “damaging” effect on the mind.

Classification according to taxonomy

The idea of ​​the pathogenicity of microorganisms arose at the end of the 18th century . At that time, the dispute between contagionists , i.e. representatives of the idea of ​​infectious diseases, and anti-contagionists was decided in favor of the former. The transferability of diseases through pathogenic organisms has not been scientifically questioned since the end of the 19th century.