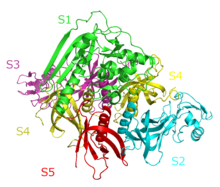 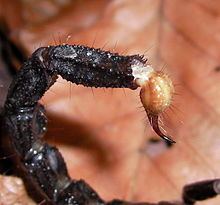 A toxin (from ancient Greek τοξικόν toxikón , German 'poison [with which one smeared the arrows]' ) is a poison that is synthesized by a living being. The scientific discipline that deals with poisons of all kinds is toxicology . The term toxinology has established itself in English for the branch of toxicology that deals specifically with toxins . The German equivalent of toxinology is increasingly finding its way into the German-speaking area.

Plant , mushroom and animal poisons have been known to man for many centuries. The first bacterial toxin, diphtheria toxin , was discovered and isolated by Émile Roux and Alexandre Yersin in 1888 . In 1890, the physician Ludwig Brieger coined the term “toxin” in connection with poisons from the bacterium Salmonella typhimurium - the causative agent of typhus .

Chemical composition and mode of action

Toxins from animals are mostly peptides or proteins , while in plants and algae alkaloids and polyethers are often responsible for the poisonous effect (alkaloids insect and amphibian toxins often come from plants via their food and accumulation and possibly remodeling). Made by organisms for their defense or to stun or kill prey, they disrupt or damage the basic cellular processes of other organisms. For example, some bacterial toxins block protein synthesis on the ribosomes . The toxins botulinum toxin and tetanospasmin (both proteins) as well as many amphibian toxins - such as batrachotoxin (a steroid alkaloid) and tetrodotoxin (an alkaloid) and also the protein-based scorpion toxins - are produced by bacteria from the group of the Clostridiaceae and have a strong neurotoxic effect . Many snake venoms are proteases ; H. Proteins that break down other proteins.

A microbial toxin is produced by bacteria, protists, or unicellular fungi. Bacterial toxins can be divided into exotoxins and endotoxins.

Exotoxins are complex proteins. They are excretory toxins that are permanently released by bacteria. They are thermally labile , which means that they are not resistant to heat and cold. Exotoxins are found on plasmids or the core equivalent . They are immunogenic but do not leave long-lasting immunity behind . You can heat or formalin action in toxoids are transferred.

Endotoxins are made up of lipopolysaccharides . They are found in the outer shell of gram-negative bacteria and are released when the microorganisms break down. Under certain circumstances, very large amounts of the toxins can be released. Endotoxins are thermally stable. The Lipid A is the toxic component. Antibodies react with the polysaccharide side chain . This usually happens very quickly, which means that an antidote must also be used very quickly .