Mode of action of tetanospasmine according to Arnab K. Rana

Exotoxins (also Ektotoxine from ancient Greek ἔξω Éxo or ἐκτος ektos , both outside, outside, 'and τοξίνη toxins , "toxic substance") are of bacteria secreted toxins against which the host body antidotes ( antitoxins can form). This is where the poison “leaves” the bacterium (in contrast to the endotoxin ).

Exotoxins are mostly proteins and therefore not thermostable , i.e. not heat-resistant.

They can be divided into three classes:

In the simplest case, they consist of an A part, which has the catalytic activity, and a B part, which mediates the specific binding to the target cell. However, there are numerous AB toxins that have several B subunits (for example pertussis toxin , cholera toxin , diphtheria toxin ).

The uptake of the toxins into the cell occurs through receptor-mediated endocytosis (English receptor mediated endocytosis , RME). The B part binds to a specific receptor on the target cell, whereupon the target cell absorbs the toxin through endocytosis . The toxin is then located in an endosome , which is usually acidified as it matures. This acidification then triggers the release of the A-part from the endosome into the cytoplasm. This allows the A-part to develop its effect.

These two diseases are triggered by neurotoxins that are produced by Clostridium tetani and Clostridium botulinum . The neurotoxins belong to the AB toxins and develop their effect on neurons . These toxins are among the most potent toxins known. The lethal dose is just a few nanograms per kilogram.

Both toxins are endopeptidases . They destroy proteins that are important for the fusion of synaptic vesicles with the membrane of neurons. As a result, the neurotransmitters can no longer be released into the intersynapse . In the case of botulism, the release of acetylcholine (in tetanus glycine) is prevented, which leads to slackening of the muscle fibers (in tetanus permanent muscle contraction).

Another class of AB toxins act on G proteins . These toxins are also highly effective. After the toxin has been absorbed via RME, the A-part catalyzes the transfer of an ADP-ribosyl residue from NAD + to the G-protein, whereby the latter is modified and the GTPase is inhibited . The ADP-ribosyl residue is attached to certain amino acids on the G protein, for example to an arginine residue of the stimulating G α protein in the case of cholera toxin , or to a cysteine ​​residue of the inhibitory G α protein in the case of pertussis toxin .

The inactivation of G proteins can have serious consequences for the cell, depending on which G protein is ADP-ribosylated. Examples are cholera toxin and pertussis toxin, which increase the cAMP level in the cell. In the case of cholera, this happens in the intestinal cells, which leads to severe diarrhea. The pertussis toxin (from Bordetella pertussis ) acts on the epithelial cells of the lungs and probably on neurons, which then leads to the symptoms typical of whooping cough. In addition, the toxin also acts on the macrophages and thereby hinders the immune response.

In the case of diphtheria toxin (from Corynebacterium diphtheriae ), elongation factor 2 (EF2) is inactivated by transferring an ADP ribosyl residue to diphtamide (a modified histidine residue). However, EF2 is absolutely necessary for protein synthesis and thus for the life of the cell. 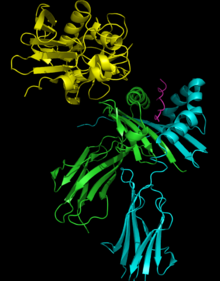 Superantigen SEC3 (yellow) bound to MHC II (green and cyan) binds next to the groove for antigen presentation (purple) on the MHC-II.

Superantigens mediate direct contact between antigen presenting cells (APC) and T cells . Normally, antigens have to be taken up and processed by APCs before they are then shown to a few T cells via MHC – TCR contact (T cell receptor). However, since superantigens independently establish contact between TCR and MHC , this means hyperstimulation of the T cells. Superantigens bind to the variable part of the β chain. Thus there is no longer any specificity for epitopes. This then stimulates 20 to 25% (normally 0.01%) of all T cells in the body, which trigger a strong inflammatory reaction throughout the body. Symptoms such as a high fever, a drop in blood pressure, and a rash may occur. In the worst case, it comes to toxic shock with severe damage to the organ systems up to multi- organ failure . The cause are mostly the toxins of Staphylococcus aureus , more rarely streptococci .