Batrachotoxins ( BTX ) (from ancient Greek βάτραχος bátrachos , German 'frog' and τοξικόν [φάρμακον] toxikón [phármakon] , German ' poison , with which the arrows are struck' ) are extremely potent neurotoxic steroid alkaloids ( pregnane derivatives) derived from the skin South American poison dart frogs of the genus Blattsteiger ( Phyllobates ). It has also been found in the skin and plumage of various New Guinea birds . 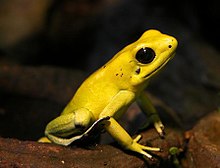 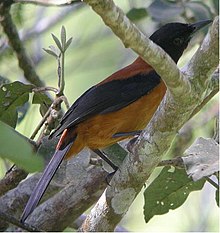 The existence of poisonous animals had been known to the natives for many millennia, but batrachotoxin was not scientifically described in Colombian poison dart frogs until the 1960s. In the 1990s it was found that the skin and feathers of the two-color pitohui ( Pitohui dichrous ) living in New Guinea also contain batrachotoxin. Also Pitohui ferrugineus and Black Pitohui ( Pitohui nigrescens ) and Blaukappenflöter ( Ifrita kowaldi ) from New Guinea carry the poison in their feathers. The frogs, on the other hand, have lethal doses of the poison, particularly the terrible poison dart frog ( Phyllobates terribilis ), the amount of which could kill ten adult humans.

Batrachotoxin has no effect on healthy skin, but causes severe, long-lasting pain, similar to a bee sting, with the smallest injury. Oral intake leads to poisoning only in pathological conditions of the gastrointestinal tract. They inhibit the inactivation of the sodium channels , so they are convulsive toxins . Touching the skin and feathers e.g. B. Using the lips causes tingling and numbness. The lethal dose for humans is estimated to be 1 to 2 µg / kg body weight. This makes the toxin about ten times stronger than tetrodotoxin . It is currently the most toxic steroid alkaloid known .

Neither frogs nor birds appear to be able to metabolize batrachotoxin . Since the frogs are poisonous in different regions and they lose their toxicity in captivity, it was assumed that the animals ingest and accumulate the poison with their food . By questioning Papuan natives, beetles of the genus Choresine from the family Melyridae were found to be a source of poison ; related beetles are also found in Colombia.

In western Colombia use Noanamá-Chocó - and Emberá Chocó -Indianer batrachotoxin as a poison for blowguns .

The poisonous birds of New Guinea are traditionally carefully skinned by the indigenous population before consumption.

An antidote to batrachotoxins is the paralytic tetrodotoxin , the poison of the puffer fish that blocks the sodium channels on the nerve axon.