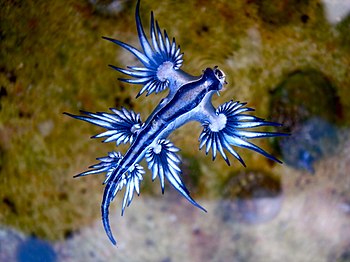 Glaucus atlanticus , a nudibranch , feeds on the Portuguese galley ( Physalia physalis ) and stores its nettle cells in the tissue

Strawberry frog ( Oophaga pumilio ), a poison dart frog from Costa Rica, feeds on u. a. of scale ants of the genera Brachymyrmex and Paratrechina and stores their pumiliotoxins under the skin.

Spurge goose ( Plectropterus gambensis ) from Africa, feeds u. a. of oil beetles (Meloidae) and stores their cantharidin in the muscle tissue.

Sequestration of toxins ( late Latin sequestrare 'secrete, separate') refers to the uptake, storage and accumulation of toxins ( poisonous substances from living beings) from the natural environment by animals , for "disposal" or for their protection against parasites and predators . The poisonous starting products can come from all kingdoms of organisms . When incorporating it is necessary that protective mechanisms are in place to avoid toxic effects. It is often stored in certain organs such as a poisonous bladder or the skin. Only animals that are not capable of direct biosynthesis of toxic substances are able to sequester poisons . Metabolic changes to the poison molecules are sometimes possible.

The Toxinology , a portion of the toxicology , deals u. a. with sequestered toxins .

The poison-sequestering animals are often known as the "real" poison carriers. Many of these poisonous animals practice aposematism , that is, they wear warning coloring . Often the process of sequestration and the mechanisms to tolerate the ingested amount of poison are not well understood.

Some Pitohui from New Guinea are known as poisonous birds , such as the two-color pitohui ( Pitohui dichrous ), Pitohui ferrugineus and Mohrenpitohui ( Pitohui nigrescens ), as well as blue-capped flute ( Ifrita kowaldi ), which probably obtain the insect venom batrachotoxin from the skin of beetles of the genus Chores and sequester plumage.

The barnacles get their body poison cantharidin from oil beetles (Meloidae). This enriches them in their tissues, so that consuming the spurge, depending on the amount of beetles ingested, is poisonous for predators and humans.

By eating cyanobacteria or dinoflagellates, plankton- eating fish can accumulate their toxins in the body and become poisonous for humans or predators. Through sequestration through the food chain , even predatory fish can become potent carriers of poison and mediate fish poisoning .

Some nudibranch snails ( suborder Nudibranchia) that feed on polyps of cnidarians can store the stinging cells in the skin of their abdomen, where they can lead to unpleasant experiences in predators. The stinging cells pass through the digestive tract undamaged and are brought to the appropriate places in the abdomen through special intestinal protuberances. The nudibranch themselves have developed defense mechanisms against the nettle attack by the polyps. Special cells with large vacuoles in the skin probably play a role here. Venom-sequestering nudibranchs are often aposematic.

Mussels can consume large amounts of poisonous dinoflagellates or cyanobacteria through plankton filtration, so that their mussel meat e.g. B. becomes neurotoxic by saxitoxin .

Although many insects to be able to produce even various poisons sequester some butterflies of the tensioner (eg. B. Arichanna gaschkevitchii and arichanna melanaria ) Widderchen and ermine moth plant toxins (for. Example, diterpenoids). Butterflies that sequester plant toxins are often aposematic. Also locusts can quinones , phenols store and other vegetable poisons in their bodies, for example Romalea microptera .

The pyrrolizidine alkaloid accumulation in some butterflies and grasshoppers is based on the sequestration of these vegetable toxins.

Toxins from cyanobacteria can accumulate in mussels and fish via the food chain. The best known are the microcystins from representatives of the blue-green algae Microcystis . The neurotoxic amino acid β-methylamino-alanine (BMAA) also occurs.

Poisonous dinoflagellates can appear in large quantities, which means that plankton eaters such as fish and mussels, as long as they are not poisoned themselves, become carriers of poison, the consumption of which can also have life-threatening effects on humans. The disease Ciguatera , a type of fish poisoning, is caused by metabolic products of the dinoflagellate species Gambierdiscus toxicus . The dinoflagellate toxins ciguatoxin and maitotoxin find their way into fish via the food chain , which are also highly toxic.

Mycotoxins are mostly accumulated through the food chain.

Many poisonous invertebrates get their toxins from their feeding plants. Since young parts of plants often contain higher concentrations of poison, the herbivores can influence the amount of poison absorbed.

Poisonous secondary metabolites like dipertene or pyrrolizidine alkaloids are ingested by some butterflies and grasshoppers.

The use of milkweed plants with poisonous milky sap was named after some groups of butterflies, such as milkweed hawks , milkweed bark owl , milkweed wolf and milkweed ring moth .

Insect venom and poisons from arachnids such as horn mites are used by both venom-sequestering frogs and birds.

Poisonous cnidarians serve as a source of poison for nudibranchs.

The most important countermeasure is knowing and avoiding poisonous animals. A sequestration of toxins through the food chain occurs especially in mussels and fish. In slaughtered meat and cow's milk z. B. the accumulation of mycotoxins can take place from the feed, which is then countered with specific adsorbents .