Nerve poisons or neurotoxins are substances that have a damaging effect on nerve cells or nerve tissue even in a small dose . Neurotoxins are a heterogeneous group of substances with a multitude of mechanisms of action . The majority of neurotoxins are exogenous , naturally occurring toxins that come from organisms. Some chemical elements are also neurotoxins, including heavy metals such as lead , cadmium , mercury and thallium . The term "nerve gas" - especially for nerve agents  - is misleading, as all of the nerve agents listed here are partially highly viscous liquids and only a few gases are neurotoxins. The term comes from the fact that the first chemical warfare agents such as chlorine were gases and gas masks were used to protect against this, which also offer little protection against nerve agents. An endogenous poisoning of nerve cells by over-stimulation and subsequent excessive secretion of neurotransmitters occur ( excitotoxicity ).

Most nerve agents are toxins, that is, nerve agents synthesized by living things, and other organic substances. In the animal kingdom they are often used for defense or as prey to hunt other animals or for plants and fungi as protection against eating. The effect of these substances is mostly based on the interaction of the substances with certain receptors of the nerve cells by triggering them as agonists (e.g. nicotine on nicotinic acetylcholine receptors ) or as antagonists (e.g. atropine on muscarinic acetylcholine receptors ) blocking them, whereby the conduction of excitation and thus the function of organs is disturbed. Another, more frequent mechanism of action is based on the opening or blocking of ion channels , such as the opening of calcium channels by alpha-latrotoxin , the venom of the European black widow, or the blockage of sodium channels by saxitoxin , which is mainly produced by dinoflagellates . The origin of such toxins are for example

When nerve agents , a class of is chemical weapons designated, which act on the routing of signals in the nerves and between the nerve. These neurotoxins can enter the body through the skin, respiration and body orifices and lead to severe, systemic symptoms that can ultimately lead to death. Such symptoms can include severe muscle spasms and seizures, tremors, muscle twitching, headache, eye pain, fatigue, confusion, anxiety, tension, nausea with vomiting and diarrhea, uncontrolled urination and stool, loss of appetite, shortness of breath, unconsciousness and respiratory paralysis.

Nerve agents are divided into groups, called a series , according to the origin of their development . A distinction is made between the G series, V series and the Nowitschok series. For the analytical characterization of the substances and their degradation products, methods of coupling HPLC with mass spectrometry are used. 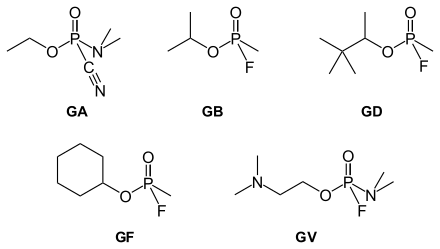 The G series of nerve agents

The G series was synthesized by the German chemist Gerhard Schrader during the Second World War , the G stands for Germany

These are non-persistent organophosphorus compounds , which can be regarded as phosphoric acid esters and have a structure similar to that shown in the adjacent figure. All but tabun contain a fluorine atom instead of an OH group of phosphoric acid ; Instead, tabun contains a nitrile group. This series of substances includes tabun (GA, 1936), sarin (GB, 1939), soman (GD, 1944), cyclosarin (GF, 1949) and GV (in brackets each G-series name and the year of first production).

The effect of these nerve agents is based on the inhibition of acetylcholinesterase . The poisons occupy the active center of the enzyme and react there with a nucleophilic serine residue to form a covalent bond. The breakdown of acetylcholine , which is inhibited by the enzyme blockade , leads to a drastic increase in the concentration of this neurotransmitter in the cholinergic system and manifests itself in the so-called acute cholinergic Toxidrom with overexcitation of the nerves and ultimately blockade of the transmission of excitation. Depending on the severity of the poisoning, the following symptoms occur: headache, nausea with vomiting and diarrhea, eye pain, fatigue, seizures, tremors, twitching of the muscles, uncontrolled urination and stool, shortness of breath, loss of appetite, anxiety, tension, confusion, unconsciousness. Death ultimately occurs through respiratory paralysis. The antidotes in emergency medical equipment used by NATO soldiers contain atropine as an anticholinergic and enzyme reactivators such as trimedoxime bromide and obidoxime chloride . The latter belong to the group of oximes .

The V series of nerve agents

This series had its origins by the chemist Ranajit Ghosh, who had researched pesticides for the British company Imperial Chemical Industries . In 1954, ICI launched the weapons-grade VG under the name Amiton. However, it was considered too dangerous to be used as a crop protection product, but quickly found use by the United Kingdom and US armed forces , even though it was never manufactured or stored on a large scale due to significant production, storage and ammunition issues.

Depending on the source, the name is derived from “ V ictory ” (“victory”), “ V enomous ” (“poisonous”) or “ V iscous ” ( “viscous” ). The fabrics in this series are sometimes also called "Tammelin's esters". Lars-Erik Tammelin worked for the Swedish Defense Research Institute with the chemical warfare agents of the First World War and Second World War and had also been involved in research on the V series since 1952.

These are also organophosphorus warfare agents similar to phosphoric acid esters, which, in contrast to the G series, are more stable and about 10 times as toxic (cf. LD 50 7 µg kg −1 for VX ( rat , iv ) and 103 µg kg −1 for sarin ( rat s.c. )). They stay longer on the battlefield, in clothing and other objects and can also be stored longer and used, for example, in grenades, rockets and land mines. The consistency is viscous and oily, which is why the common name nerve gas is misleading. In addition to the well-known examples shown here, of which only VX and VR were used militarily, there are other derivatives with similar properties. The effect and corresponding countermeasures are the same as those of the G series. This series includes the substances VE , VG , VM , VP , VR , VS and VX, as well as EA-2192 and EA-3148 , VX being the best known and best researched warfare agent in this series.

After adequate sample preparation , contact with toxins from the V series can be detected by identifying the metabolite methylphosphonic acid using the coupling of mass spectrometry with ion chromatography . A relatively fast detection method for poisons, including those of the VR class, uses the coupling of HPLC with tandem mass spectrometry . The detection limit for the toxins in urine samples is given as 5 μg / ml.

Novitschok ( Russian новичок , as much as newcomer or beginner ) refers to a number of new types of Soviet nerve warfare agents, which were developed between 1970 and 1990. They are some of the deadliest nerve agents ever made, some of which are said to be around 5 to 8 times as potent as VX . There are over a hundred variants in this series, some of which are shown in the illustration on the right. The effect and corresponding countermeasures are the same as those of the G series.

Diisopropyl fluorophosphate , or DFP for short , was first developed and produced by the British during World War II. It was intended to use DFP as a tactical mixture with mustard gas . So it would have become a contact poison . The actual use of DFP as a warfare agent is not known.

Some drugs and alkaloids also have a damaging effect on nerve cells and are therefore classified as neurotoxins. Although ethanol has a neurotoxic effect and excessive consumption of alcoholic beverages can lead to so-called alcohol poisoning , ethanol is not classified as a poison and therefore also not as a neurotoxin . Noble gases do not count as poisons and are chemically inert towards biomolecules. However , atoms of the gas can interact with biological systems via induced dipoles . For example, xenon has a narcotic effect through a mechanism that has not yet been fully understood, involving glutamate receptors .

In vitro it could be shown that 1,1 '- (propane-1,3-diyl) bis (4-tert-butylpyridinium) diiodide is able to counteract the effects of soman through allosteric modulation of nicotinic acetylcholine receptors.