The title of this article is ambiguous. Further meanings are listed under ax (disambiguation) . 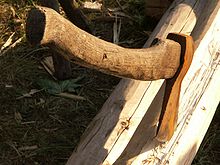 Ax with a small edge angle, as it is mainly used for delimbing

Components of the ax

The ax , also called a hoe in Upper German , is a tool and generally consists of a piece of steel with a forged steel edge (the blade or head ) and the house . It is attached to the eye on a wooden or plastic handle (or shaft).

The ax is used for striking. The house and head are mostly forged because such steel, when properly heat treated, has a good compromise between hardness and toughness. In contrast to the shorter and lighter hatchet , the ax is usually held with both hands. The wedge angle of the ax body is between 20 ° and 30 °, depending on the model and use on the cheek, the edge , which is usually spherically ground , is around 35–40 °. Their shape results from the application. Cross geschäftete devices as adze called. They are used nowadays for processing wood .

Stone axes were used alongside antler axes in Europe as early as the Mesolithic . Unpolished axes made of flint have mostly survived from this period ( core hatchet , disc hatchet ).

In Pratteln in the Liestal district of the canton of Basel-Landschaft in Switzerland , the extremely rare semi-finished ax made of alpine rock was found in a 6,000-year-old Neolithic settlement. The shape of the ax with the flat top and bottom is easy to see. It was carved out of a rock by pecking with a hammer . After that, a through-hole should probably be made between the side thickenings in order to create a shaft hole. This was not done for unexplained reasons, as was the grinding and polishing of the surfaces.

The cult function of axes and hatchets is documented by a 6,000-year-old Cortaillod ax found near Cham Eslen in Switzerland in Lake Zug . Its double ax body was 17.2 cm long and attached to the 1.2 m long ash shaft with wedges made of antlers . This was wrapped spirally with rhombus decorated birch bark . The shaft of the Eeolithic ax from grave 43 in Varna in Bulgaria was wrapped with a gold strip. Axes made of copper have been found since the early Neolithic .

Odysseus in front of the ax eyes

In a rune script from Maes Howe on the Orkney Islands , the author of the lines claims to be the most experienced rune writer in the western ocean and to have used the ax that once belonged to Gaukr Trandilsson from Iceland .

After returning home to Ithaca, Odysseus proves his identity by shooting an arrow with his bow through the shaft holes ("eyes") of twelve axes.

In modern times, axes are forged from steel . The body is usually provided with a hole (eye) to ensure a firm connection with the stem.

With the ax u. a. cuts through wood fibers when felling, limbing or notching trees. As a rule, it has a more or less slender blade with a relatively acute angle to enable easy penetration into the wood. When felling trees with a felling ax , the wood is cut at an angle to the grain, from above and below, in order to drive a wedge out of the wood. This wedge can be knocked out up to two thirds into the trunk, depending on the incline and the desired direction of fall. Then another wedge is cut from the back, shifted slightly upwards, until the tree falls. Instead of cutting out the second wedge, it was later possible to cut with a two-hand blade saw. Using a saw or even a chainsaw is more efficient because less work is required.

Axes with a particularly slender edge were used for delimbing felled trees. With the advent of lighter chainsaws, axes are only common because of less noise and odor or when there is a lack of petrol.

With a splitting ax, also known as splitting hammer , wood that has already been sawn is split into firewood. Splitting axes have a strong and heavy blade that is sharpened on both sides over a large area with a relatively blunt edge angle - they have a significantly larger wedge angle than felling axes or carpenter's axes. The cutting edge of the ax is hammered into the wood parallel to the grain. The high kinetic energy generates high splitting forces, combined with a large gap width, so that the elastic limit is more easily overcome until the wood breaks. In this way, large wooden blocks (trunk sections) can often be split in one fell swoop. Splitting hammers with splitting wedges or wood splitters are also suitable for this purpose. They have a wedge angle of up to 40 °.

High-quality axes have been awarded the “ Dreipilz ” quality mark in Germany since 1932 .

Axes and hatchets with a cutting and splitting function are used to hew and smooth workpieces, to manufacture beams, posts, construction timber and wood connections. You have i. d. Usually with slim blades that can be sharpened on one side. Typical examples are the classic carpenters' broad axes.

A tool with a knife-like blade is called a Swedish clearing ax .

The sapie , also called sappi (e), fidget or zapine, is a special skidding tool that is built similar to an ax, but with a curved spike instead of a cutting edge. It facilitates manual wood removal.

Another specialty is the ice ax. Until the beginning of the 20th century, it was used to process and move blocks of ice transported by carts in the ice cellar ( food preservation ).