Cham is a municipality in the canton of Zug in Switzerland . It belongs to the Ennetsee region .

Cham is located on the north bank of Lake Zug at the outflow of the Lorze in a hilly landscape formed by flat glacier moraines east of the Reuss plain .

The neighboring communities of Chams are the Zug communities of Hünenberg ZG , Zug and Steinhausen ZG and Knonau and Maschwanden in the canton of Zurich . Cham is part of the ZugWest economic region .

The Cham area was settled 6000 years ago. This settlement continued in the Roman Empire . In 858, Ludwig the German gave the Chama court to the Fraumünster Abbey in Zurich . In 1360 Cham received town charter. The bear has been the heraldic animal of Cham since 1608 . In the 18th century, which began industrialization , while the number of inhabitants of 1321 rose in 1850 to about 10,000 inhabitants in the 1986th

In 1991 Cham received the Wakker Prize for the sensible use of the building fabric, the open spaces and the traffic areas. In 2001, Cham received the Energy City label . In 2004, after extraordinary efforts in the affected areas, the European Energy Award Gold, i.e. the gold energy label, was presented. Cham is the fourth municipality in Switzerland to have received such an award.

The village was named kama by the Helvetians , which roughly means "village". The Romans apparently adopted this name. With the arrival of the Alemanni the village was called chama . Chom is documented in 1491.

The Cham municipal council consists of five members and is set up as follows:

At the end of the 19th century , the Anglo-Swiss Condensed Milk Company founded in Cham established itself in the dairy industry, which processed milk into condensed milk in the “Milchsüüdi” . Other large Cham companies are Cham Paper Group Holding , Maggi and Varo Energy .

The Blegi motorway junction and the Cham and Zug motorway exits are located in the Cham area .

There is a landing stage for the Lake Zug shipping company on the shores of Lake Zug .

The local football club SC Cham , founded in 1910, played in the National League B , the second highest Swiss division, in the 2007/08 season , but rose again at the end of the season. 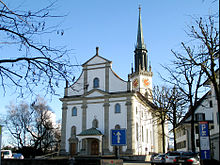 Cham maintains a town partnership with the town of the same name in the Upper Palatinate : 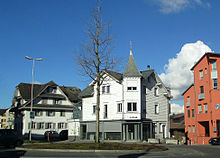 In the village center

Political communities in the canton of Zug