The title of this article is ambiguous. Further meanings are listed under Maggi (disambiguation) . 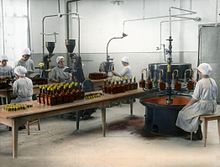 Maggi (in Germany and Austria [ magi ], Switzerland [ madːʒi ]) is an after its founder Julius Maggi named Swiss companies in the food industry , which is primarily for instant soups , bouillon cubes , liquid seasoning , ready-made sauces and ready meals is known.

Maggi has been a brand of Nestlé AG since 1947 . Maggi-Unternehmerungen AG has its Swiss headquarters in Cham . In Germany, the brand is distributed by Maggi GmbH, a subsidiary of Nestlé Deutschland AG , based in its main plant in Singen . Other German production locations are Lüdinghausen , Neuss , Conow and Biessenhofen . 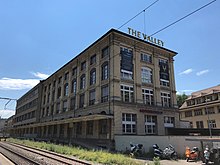 His father's mill in Kemptthal , which Julius Maggi took over in 1869 , developed under his leadership into one of the pioneers of industrial food production with the aim of improving the diet of working-class families through better nutrient supply and faster preparation. Since 1884, Maggi has been offering flour made from protein-rich legumes ( legumes ), which can be cooked quickly by roasting beforehand .

At a meeting of the Swiss “non-profit society” in 1882 the doctor and factory inspector Fridolin Schuler spoke about the miserable nutritional situation of the factory workers: women workers no longer find enough time to cook for their families, cold meals or alcohol often replace hot meals; Meals are served in the canteens of the factories that are cheap but not sufficiently nutritious. The consequences are malnutrition , stomach diseases and high child mortality . Schuler propagated protein-rich , easily digestible pulses / legumes. They should be offered to the workers in a form that would be quick and cheap to prepare. The “society” turned to the Maggi company, among others.

Julius Maggi experimented for two years with various methods of mechanical and chemical processing of the legumes and different mixtures. The results were presented to the commissioners of the “non-profit society” on November 19, 1884 and approved by them. In a contract, the company committed itself to exclusively recommending Maggis Legumes for three years. Maggi, for his part, guaranteed a fixed price and regular product controls for sales in Switzerland . The great success did not materialize at first. The «society» was accused of representing the interests of a private company. Maggi, on the other hand, found it difficult to assert itself on the market against other soup flour suppliers, despite the support. 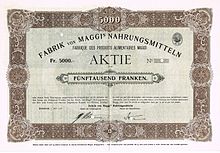 Maggi delivery by bicycle (around 1900)

In 1872 Julius Maggi founded J. Maggi & Cie. From 1885 he brought nine industrially produced legume flour varieties onto the market. At the Swiss culinary art exhibition in Zurich in 1885 he received the "First Class Diploma". The first ready-made soups based on legume flour followed in 1886 and the Maggi seasoning as a competitor for the meat extract invented by Justus von Liebig . The first warehouses and branches abroad were founded, in 1887 also in Singen, Baden . In order to raise additional capital for the planned further expansion, the company was converted into a stock corporation in 1889 with Julius Maggi as general manager . In 1908 Maggi brought the stock cube onto the market. 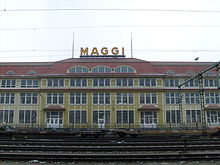 Maggi factory in Singen in front of the Hohentwiel

Maggi introduced extensive social benefits that were unusual for the time, such as canteen , workers' housing, company health insurance, widow's and old age pension, and in 1906 the Saturday off. During a strike at the Singen plant in 1907, Julius Maggi mediated successfully, accused the management of having lost “touch with the workers” and suggested the establishment of a “ workers' committee ”, an early form of works council . In 1912 Maggi Singen signed the first collective agreement in the German food industry.

The company founder Julius Maggi lived mainly in Paris from 1902 and led the company to great success in France with new products. The distribution of pasteurized milk by the “Société laitière Maggi” in 1912 amounted to 60 million liters, and in 1912 sales of bouillon cubes with the name KUB amounted to 6 million units per month.

Shortly after Julius Maggi's death in 1912, the company was converted into a holding company, the Allgemeine MAGGI-Gesellschaft .

In 1933 Maggi opened a new factory for wort production in Le Blanc-Mesnil (France); In 1940, New Milford followed in the USA as the eleventh and final factory to be established abroad.

While the Maggi company in France had to fight in public and in court before, during and after the First World War to avoid being mistaken for a German company and a German spy nest, and finally in 1919 in SISA (Société industrial des spécialités alimentaires) renamed, it was hitched to the cart of National Socialism in Germany in the 1930s . Rudolf Weiß, a comrade in arms of Adolf Hitler and an early party member of the NSDAP , took over the management of the plant in Singen. In 1938 Maggi Berlin and in 1940 Maggi Singen received the title of "National Socialist Model Company" after the company had already been officially certified in 1935 that "all shareholders" as well as "all managing directors, authorized signatories and authorized representatives were of Aryan descent". This servility of Maggi towards National Socialism is primarily explained by the economic interest in doing business with state or communal institutions. In order to get such orders, Maggi had to be repeatedly confirmed to be an "Aryan company". Maggi received an exclusive supply contract for the Wehrmacht , for which even a special soup was produced. Two thirds of Maggi production went directly or indirectly to the Wehrmacht during the war years. During these years the company was dependent on foreign workers. The number of forced laborers from Eastern Europe fluctuated between 170 (late 1943) and 48 (May 1945).

After the Second World War , the German Maggi branch was only saved from confiscation and demolition due to the intervention of the highest authorities of the Confederation in Bern and with the support of the Red Cross . The merger with Nestlé in 1947 also served to "degermanize" the image of Maggi.

The Maggi-Nestlé merger in 1947 was not without its difficulties. There was strong animosity between the new management and the workforce. The house tariff at Maggi in Singen was questioned. Ludwig Erhard , who knew the then General Director Riggenbach well, announced that “his economic policy would falter if Maggi continued to pay such high wages.” The relocation of the commercial department from Berlin to Frankfurt in 1949 also sparked great skepticism among the works council .

The merger of Nestlé and Maggi took place over a period of several years and with the help of a specially founded company called SOPAD (Société de produits alimentaires et diététiques). Completely different product ranges and distribution mechanisms had to be reconciled, but ultimately turned out to be complementary . As a new production location in Germany (next to Singen / Hohentwiel), Lüdinghausen in the Münsterland was put into operation in 1964 . In 1992, a production site was opened in Teutschenthal near Halle (Saale) .

In 2002, Nestlé sold the Maggi site in Kemptthal, along with its flavor production, to Givaudan . 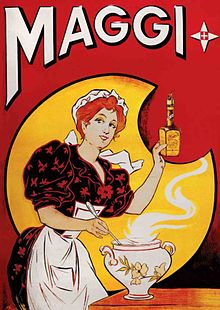 By 1885 Maggi had designed the advertising for its products itself. At first, the packs looked extremely simple. They were printed with the manufacturer's name and product designation, plus a slogan such as “For the poor and the rich”. The advertisements were similarly simple: “ Best, healthiest and cheap without competition ” (1884) or “ One of the main things in the preparation of Maggi soups is salting until it is palatable and cooking until the soups become a little slimy. »(1885).

In 1886 Maggi set up an in-house advertising and press office that was directly subordinate to Julius Maggi. He hired Frank Wedekind , then 22 , who was still completely unknown as a writer, to head the office . He stayed for a year, during which time he wrote 150 advertising copy for Maggi. It remained unclear whether Wedekind deliberately allowed himself ironic exaggerations when he recommended banal mass-produced items such as ready-made soups and condiments with ever new anecdotal ideas. Here is one of his works:

“ If it weren't for the cooking class, ” sighed the slender, black-eyed angel child of seventeen, “ I'd really like to get married. But he definitely wants me to take a cooking class beforehand. " Elschen, calm down, " said the sensible mother. “ I will teach you the most necessary things; and then every lunchtime you season his dishes with this bottle here. Look what kind of eyes he'll do. Every day he gives you two more kisses for it! It is namely Maggi's soup and food seasoning. »(Written comment from Julius Maggi:« Famos! »).

Even after Wedekind's departure, Maggi allowed the intensive advertising activity to continue, with the advertising material advertising and poster that dominated at the time (in France the famous Art Nouveau graphic artist Alfons Maria Mucha designed a poster for the company).

Advertising slogans in later times were: “People need something warm - Maggi” and “That certain drop of something”.

The following TV commercial is known in Africa: "Girls, how did you get that killer bum off in just ten days? What's your secret?" Answer: "With a Maggi cube." In West and Central Africa alone, 36 billion Maggi bouillon cubes are sold every year. They contain 50% salt , displace the variety of local spices and could contribute to high blood pressure and diabetes . Maggi consultants try to ensure that African customers use Maggi cubes without additional salt in order to reduce their salt consumption.

By 2020, the domestic Maggi range is to be geared more towards well-known and healthier ingredients and the salt content to be reduced as part of the initiative called "Simply Good".

In autumn 2006 an advertising agency secured a weather sponsorship for Maggi at the Institute for Meteorology at the Free University of Berlin . Since Maggi is an abbreviation for Margaret in English , this weather sponsorship was possible. The name Maggi was pronounced Mäggi because it is the English female first name .