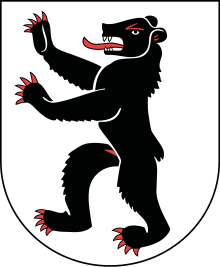 He has been known as a herald image since the Middle Ages . First mentioned on the seal of the Bernburg line of the House of Ascanians , it has conquered its place in heraldry .

It is stylized in the Berlin coats of arms , but the often natural representation can be found in Swiss coats of arms (city and canton of Bern ). The upright gait, on the other hand, is found in the cantons of both Appenzell and the city of St. Gallen (with a golden collar), which can mean resistance and rearing up.

The bear is mostly black, often silver, rarely red or another color, erect ( Berlin , Roßlau ), striding ( Bernau im Schwarzwald , Bernsdorf , Sandersleben (Anhalt) ), ready to catch , growing ( Güntersberge , Zeulenroda ), sometimes crowned with a chain or collar ( St. Gallen ). He often walks on battlements, for example in the coats of arms of Radegast (southern Anhalt) , Raguhn , Zerbst and also of Güsten . Almost all of these bears come from the Anhalt house arms.

Heraldically the bear is emblazoned with a halberd as a mercenary and with an ax as a dancing bear . In addition, there is often the color yellow (heraldic: gold) in the background to draw attention to the noble blood of the bear (see also below). Sometimes the background is white (heraldic: silver).

Parts of the bear, such as the paw or the head ( Bärenstein (Altenberg) ) can also be found in coats of arms. The color of the reinforcement (claws, tongue) can be different.

In many coats of arms the bear (tinged in black) has symbolically taken over the name of Albrecht I. The Margrave of Brandenburg was nicknamed the Bear or the Beautiful . All coats of arms in this line have more or less a relationship with the heraldic animal. Historically not absolutely certain, but the origin of the bear in the coats of arms of the city of St. Gallen and the two Appenzell is probably from the legend of St. Gallus , to whom firewood is said to have been brought by a bear.

In the coats of arms of Bernsdorf (Upper Lusatia) , Bärenstein (Erzgebirge) or Bern , the bear has been onomatopoeic into the place names.

In the coat of arms of Zheleznogorsk , a silver-armored golden bear is bound by the three orbits of a silver atom .

The California seal also features a grizzly bear , while the Greenland coat of arms, unsurprisingly, features a polar bear .

Shield holders are bears in the former state of Anhalt . Here is a third animal in the crest , all of which are crowned.