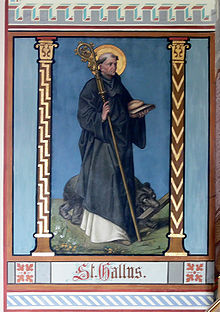 Gallus on a wall painting in the St. Venantius branch church in Pfärrenbach

Gallus ( lat. The Celt ; folk etymological cock ) (* around 550 in Ireland or in the Vosges region - Alsace ; † October 16, 640, according to other sources 620 or 646-650, in Arbon , Switzerland ) was a wandering monk and missionary who worked especially in the Lake Constance area and is venerated as a saint . He is considered the founder of the St. Gallen monastery and, together with Otmar , is the patron saint of the city and diocese of St. Gallen .

The hagiography of Gallus has come down to us in three versions . The Urvita , the so-called Vita vetustissima Sancti Galli, dates back to the late 7th century according to the Middle Latin Walter Berschin . It has only survived in fragments . The two arrangements from the 9th century by the Reichenau monks Wetti and Walahfrid Strabo have survived in full. In terms of content, the two authors have barely changed the oldest version and have limited their edits to linguistic improvements. The third and final version by Walahfrid was widely used.

The origin of St. Gall is controversial. As the hagiographies of the Reichenau monks Wetti and Walahfrid report from the 9th century, he came from Ireland and came to the European continent in the wake of the wandering monk Columban of Luxeuil . A genealogy from the 9th century also suggests Irish origin, and so this was considered certain until the second half of the 20th century before it was questioned by research. The resulting discourse that is still current initially gave rise to two theories. The first sees Gallus as Irish and justifies this with his Irish environment. The second denies his Irish origin. The Romanist Gerold Hilty , based on his research into Gallus' language skills, takes the view that he came from the bilingual Vosges - Alsace region. The historian and theologian Max Schär provided an approach that unites the two interpretations. In his view, Gallus was a man of Irish descent who was born and raised in a bilingual area, presumably Alsace.

Gallus in the coat of arms of Tuggen

Around 590 the abbot Columban founded the Luxeuil monastery in the Vosges , where Gallus was one of his disciples. From Luxeuil the two moved to Alemannia around the year 610 together with other monks . However, where Gallus and Columban first met is controversial. The hagiographies report that Irish-born Gallus entered Bangor Monastery in what is now Northern Ireland, from where he moved to Luxeuil with Columban and other brothers. The more recent research on Gerold Hilty, on the other hand, assumes that Gallus came from eastern France and thus only met the Irishman during Columban's activity in Luxueil and became his pupil.

Due to dynastic conflicts between Theuderich II and his brother Theudebert II, Columban had lost support in the Frankish Empire and had to leave Luxeuil. The further mission journey took the community around Columban from Metz up the Rhine and via Zurich and Tuggen finally via Arbon ( Arbor Felix ) to the Bregenz area at Lacus Brigantinus , today's Lake Constance. In Bregenz, as in Arbon, they met a Christian community that had partly turned back to paganism . Gallus preached in the Alemannic language, in contrast to Columban, who did not speak it. Here and before in Tuggen, the people of faith destroyed the statues of local deities in 611 and threw them into the lake. As a result, the messengers of faith brought some of the inhabitants against them, who complained to their Duke Gunzo; two monks are killed after being ambushed (following a missing cow into the forest). The founding of the monastery, which had begun in Bregenz, failed, and Columban traveled on to Bobbio in Italy in 612 to found a monastery at the invitation of the Longobard prince.

The Gallus legend reports that Gallus had to stay behind because of a serious illness (fever) and was nursed back to health in Arbon by the priest Willimar, whom he knew from Arbon. Legend has it that Gallus was excommunicated by Columban for disobedience and was not allowed to read or take part in mass during his lifetime.

Memorial plaque in honor of Gallus an der Steinach in St. Gallen

After a long stay in Arbon, Gallus decided in 612 to follow the Steinach river, which flows into the Lacus Brigantinus (Lake Constance) , together with the deacon Hiltibod from Arbon . They moved along the stream into the Arbon Forest (the entire area from Lake Constance to Appenzellerland was a primeval forest at that time) and came to the waterfall at the Mühlegg Gorge . Here Gallus stumbled and fell into a thorn bush. He interpreted this as a divine sign to stay here. Many depictions of Gallus are therefore subtitled with the Latin Bible verse:

The legend of Gallus and the bear

Foundation of the monastery

A well-known legend about St. Gallus tells about the following night: While Hiltibod was sleeping, Gallus was still awake when suddenly a bear appeared. Gallus was not intimidated, not even when the bear straightened up. Gallus ordered the bear in the name of the Lord to work for his food and to fetch a piece of wood for the fire. The bear obeyed and carried the wood to the fire. Then Gallus gave the bear a loaf of bread on the condition that he never showed up again. Hiltibod, who overheard, said to Gallus: "Now I know that the Lord is with you when even the animals of the forest obey your word." The bear never appeared again and later became the heraldic animal of the city of St. Gallen . (→ History of the City of St. Gallen )

The animal is also Gallus' most important insignia , he is almost always depicted with a bear at his side.

Life in the hermitage and death

Gallus and other subsequent companions built a hermitage that was consecrated to Maria and the Burgundian saints Desiderius and Mauritius . Gallus lived as a hermit , but gathered many students around him and opposed pagan customs.

In 612, the Alamanni, Duke Gunzo , convened a synod of all tribal princes and important clerics in order to fill the vacant chair of the Bishop of Constance again. He wanted to make Gallus bishop, perhaps also because he had cured his daughter Fridiburga from a serious illness. Gallus did not want this and already came to this conference with another monk, John, to propose him as bishop. The Duke accepted this request, and after three years of training by Gallus, Johannes is said to have become Bishop of Constance . But Gallus continued to live an ascetic life withdrawn .

According to legend, he dreamed of Columban's death on the day he died and read Mass again. He sent the deacon Maginald to Bobbio to see for himself, and on his return Maginald brought him the crook of Columban as a sign of reconciliation. In 629 a delegation from Luxeuil came with the offer to succeed the late abbot Eustasius, which he refused.

On October 16, 640 (according to other sources: 620 or 646–650) Gallus died after his last sermon in Arbon. This day, Gallus Day , is still celebrated today. His grave became a place of pilgrimage and he was especially venerated in southern Germany, Alsace and German-speaking Switzerland , his main area of ​​activity.

In 719, a hundred years after Gallus' death, the Alemannic priest and later St. Othmar founded an abbey in his honor at the pilgrimage site and named it St. Gallen . St. Gallen became a refuge for Irish scholars and artists who were persecuted in their homeland by the Vikings and the Danes.

Around 1350 the head of St. Gallus was transferred from St. Gallen to Prague, where it is kept as a relic in the church of the same name (Kostel sv. Havla) in Prague's old town .

Other places and churches were also named after Gallus.

Gallus is considered the patron saint of the canton of St. Gallen as well as the geese and chickens.

St. Gall's name day coincides with that of St. Hedwig on October 16. The farmer's rule for this day rhymes: "Hedwig and Sankt Gall 'make the snowy weather all". This day of remembrance can be found in the calendars of the Evangelical , Roman Catholic and Orthodox Churches .

Numerous churches and chapels are dedicated to St. Gall , including the Cathedral of St. Gallen .