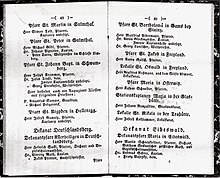 A branch church is a church building (side church) that exists next to a main church, the parish church . The name is derived from Latin ( Filius = son, Filia = daughter).

The term is not clearly delineated. It is used regionally and confessionally differently and says nothing about the size or equipment of the building. Further names are branch office , locality , parish curate , parish vicarie , rectorate , succursal church , station chaplaincy or subsidiary church . 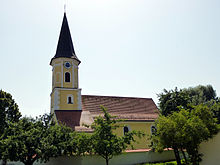 There are no generally applicable rules about the circumstances under which a branch church exists or can be established. According to canon law, the corresponding measures are incumbent on the bishop of the respective diocese , who also decides whether and to what extent the property assigned to a branch church (property of the church building, interior furnishings, etc.) should exist as a legal personality .

Affiliate churches (for example in art-historical documents such as monument registers ) are also churches in which there is no longer an independent congregation, but which had a certain degree of independence in the past without expressing a specific legal status: for example because of their geographical distance from the center of the respective parish or because it is a former parish church. However, monastery churches of existing monasteries are usually not referred to as subsidiary churches.

The frequency of branch churches varies from region to region. While there are almost no branch churches in the (large) Austrian Mühlviertel, for example , there are almost 40 in the (relatively small) Flachgau . The existence of branch churches depends on the parish constitution and the practice of the respective diocese. In the medieval "Saxon parish constitution" there was an " original parish " with responsibility for the neighboring villages within a radius of about 10 to 15 kilometers. In order to spare the villagers the long hikes, branch churches gradually emerged in the neighboring villages. In the area of ​​the German East Settlement , the Saxon parish constitution also initially applied in Niederlausitz , in West Mecklenburg and in the Jüterbog region . From around 1200, however, due to Dutch traditions, especially in the Mark Brandenburg, it became common for each village to have its own church. Later on, branch churches were sometimes set up here, but in the form of a legal assignment and subordination if a pastor had to look after two parishes at the same time.

In the Catholic Church, the difference between a branch church and an altar chapel is that, at least in the past, a branch church was permanently assigned its own priest with independent pastoral care and its own administrative organization (church assets, etc.), while in the case of an altar chapel this was in contrast to other chapels have the appropriate permits and equipment for the (regular) celebration of religious services (so-called mass licenses , tabernacles , bells , etc.), but no priestly position of their own. The size of the building, in which the sum of the building donations or the wealth of a founder can be expressed, is in no way important, only its equipment and the associated permits and the internal organization of the church.

The term “Filialkirche” is also used for church buildings of the Protestant church, for example for the Pankratius Chapel in Niebelsbach, Keltern municipality in Baden-Württemberg .

Despite its size not a branch church, but the chapel in Rachling, Marhof parish

In the case of branch churches with the believers gathered around the respective church building, this can be a substitute form or preliminary stage of a parish if for certain reasons a parish cannot or should not (yet) be set up. Such forms of organization were called “permanent vicaries” according to canon law until 1983, their priests ( vicar , parish vicar, vicarius perpetuus, local vicar) were usually treated as parish priests. Such vicariates, branches (or branch churches, etc.) denote a part of the church that was either not yet a parish area or that was created through the division of a parish according to the procedure and framework conditions provided for by church law. Like a parish, they had to have their own church and their own priest, who had permanent priestly powers (for the administration of the sacraments and similar functions such as keeping church registers and registers ). Occasions for the creation of a branch church (parish) can be local (long ways to the parish church) but also of a different nature. Such an occasion could z. B. the foundation of a church and other assets (Beneficium), under the condition of the transfer of certain rights to the beneficiaries ( Rector , local chaplain) etc. This priest can z. B. the pastoral care of a certain group of people, for example to celebrate the service in a certain (e.g. traditional ) form or at a certain place, altar, etc. The basis for the creation of permanent vicariates was until the new version of the Codex Iuris came into force Canonici (CIC) on November 27, 1983 (first Sunday in Advent 1983) of canon 1427 of the CIC in the version from 1917.

There were various other forms of "branch churches": A parish was designated as a station chaplain, pastoral care district, curate chaplain or "dependent rectorate", although it already had a certain degree of independence, but whose priest did not (yet) have the rights of permanent vicar of a locality .

The word 'Filialkirche' is also not a term used in current canon law of the Catholic Church. Since 1983 canon 516 of the CIC has been the basis.

This uses the term “ quasi-parish ”: According to this (can. 516 § 1) a quasi-parish is a certain community of believers with their own pastor. It is on a par with a parish, but has not yet been established as a parish due to special circumstances. In addition (can. 516 § 2) the diocesan bishop has to take precautions “in another way” (Latin: “alio modo”) if “any communities” ( Latin : “quaedam communitates”) are not established as a parish or quasi-parish hold true. The procedure and the designation of the respective form of organization can therefore still be different in the individual dioceses. Organizational forms that were referred to in older documents as "vicaria perpetua" (perpetual vicariate, permanent vicariate, locality, parish exposition, curate beneficiary, rectorate, parish vicariate, curate, parish curate) etc. are usually set up as quasi-parishes, provided they have their own administrative organization (Secretariat, church registers, etc.) should have. In the case of areas or church buildings that have their own pastor but are to be administered from the seat of the respective parish, an organization can also be set up within the framework of the existing parish (in addition to the organization according to can. 516 § 2 CIC) (can. 545 § 2 CIC: parish vicar for a certain part of the parish).

For chapels (in the CIC Latin: " Oratorium ", plural "Oratorii", private chapels called "Sacellum privatum"), the rules of canons 1223 to 1229 CIC apply, according to which worship services in such buildings (only) with consent - the z. B. can be restricted to certain times - may take place. The difference between a branch church, a mess chapel and a chapel or oratory is based on (canon) law.

After these explanations, however, it should be noted that a branch church is generally not a quasi-parish, namely only (mostly) if the church is permanently assigned a church rector. Then it is often referred to by one of the names mentioned above.

In 2005, in various dioceses in Germany (most far-reaching in the diocese of Essen ), several parishes began to be merged into large parishes. This creates a main church, plus (several) parish churches, each with their own subsidiary churches and possibly “other churches”. In many cases, these “other churches” no longer receive any funding from the diocesan budget. Other financing models must therefore be found. If this does not succeed, they must be profane and put to another use or demolished.

In Austria and some German dioceses, Catholic parishes form parish associations , whereby parish churches are not "degraded" to subsidiary churches, but a priest takes over the pastoral office in all parishes of the association. Apart from churches that belong to a religious order, there are also subsidiary churches belonging to the diocese, which, mostly together with the state and often also the Federal Monuments Office , takes care of preservation.