The following important information is missing from this article or section:
There are no mosques
Help Wikipedia by researching and pasting it .

Profanation or profanation (from profane , the associated verb is profanieren) is the desecration or degradation of a sacred (material or immaterial) object. Most often, sacred buildings such as churches, mosques, synagogues and temples are referred to as profanation. Occasionally this means the deliberate devaluation by people with a different religion or belief , but the thoughtless use of holy words is also considered profanation.

A profanation or desecration in terms of the canon law of the Roman Catholic Church needed if the church use of a church building is completed, for example due to demolition or conversion. It is thus the counterpart to church consecration . In terms of state church law, profanation in Germany has the effect of de-dedication .

A desecration is decided by the responsible bishop . It usually takes place during a last Holy Mass in the church concerned. Any relics in the church must be removed. After the profanation, the church is no longer regarded as a sacred space for worship, but as an ordinary building. This can thus be torn down or used for another purpose without violating church customs or laws, as the building has lost its consecration or blessing through the profanation. After the rededication, however, the building should not serve any “unworthy purpose”.

In Germany, the profanation of church buildings is not only carried out in the area of ​​the Catholic Church. However, extensive documentation is available for the Catholic Church, so that the following collection is limited to this church for the time being. 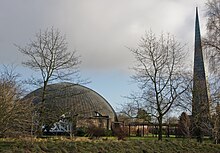 The St. Michael Church in Flensburg - Weiche , profaned in 2005 , has been visibly falling apart since its closure. (Photo 2011)

The Catholic Church right differentiated between the need ordination or blessing a church ( Kirchweihe , can. 1217 CIC ) and the necessary ordination of a fixed altar ( Can. 1237 §1 CIC ). Both ( can. 1238 §2 CIC ) require a separate profanation, which is carried out exclusively and effectively by a decree of the Ordinary (Church) ( can. 1212 CIC and can. 1222 CIC ) and therefore does not require any liturgical act. In the case of a church, the local bishop must first hear the council of priests (without being obliged to obey its vote) and obtain the consent of those who “legitimately claim rights to the church” ( can. 1222 §2 CIC ), which in Germany concerns the church council (not the parish council ) or a patron . Since there is no need for a ritual for church profanation, the Roman authorities have no interest in regulating such rituals worldwide.

Rituals and ideas about their effects

The profanation by the decree of the local bishop is in contrast to the celebration of the church consecration and altar consecration . In addition, the liturgical texts of the altar consecration speak of an eternal dedication of the facility for worship. The complex system of, above all, unwritten rules and customs for behavior in church rooms and the use of the same stages the sanctity of the room as withdrawn from human arbitrariness. Since the late 16th century, the attempt has therefore been made to accompany or carry out the profanation of a church through rituals. These attempts were never included in the liturgical books intended for the entire Catholic Church and are therefore only handed down or further developed as diocesan liturgies until today .

Antiquity and the early Middle Ages do not have a proper church profanation. Most of the elements of the rite of consecration did not develop until the High Middle Ages . Contradiction to the idea that a church would be consecrated by the first use in accordance with its dedication is preserved in Letter 66 from Synesius of Cyrene . He points out the problem that, on the basis of this idea, by celebrating a Holy Mass, any location could be turned into a church - and thus church property. Statutory acts would therefore have to be available for dedications. In this respect, the liturgy corresponds to the oldest Christian conceptions about the establishment and redemption of the sanctity of spaces.

The Byzantine patriarch Kallinikos refused to carry out a ritual for church profanation against the emperor Justinian II in 693/94. The emperor wanted to demolish a church in order to build a fountain and a pedestal for one of the circus parties . The Patriarch first stated: “We have a prayer for building a church. But our tradition does not know a prayer for the destruction of a church ”. At the urging of the emperor, however, he said: “Glory to God who endures everything, now and forever and in all times to come. Amen". The text continues: “And when they heard this, they destroyed the church and built the well.” The patriarch refused to invent a profanation liturgy, but could not escape the situation. His doxology is interpreted as a substitute for it.

Since the Middle Ages , sources of canon law testify that with a certain degree of destruction of a church building (and altar) its character as a sacred space is wiped out. Up to the present day, stylized acts of minimal destruction can be found in rituals for church building, such as damaging the altar substructure with a hammer or turning over candles and candlesticks, which is common today. According to Working Aid 175 of the German Bishops' Conference, the altar plate should not be damaged or profaned, but rather salvaged and kept for a renewed use in accordance with the purpose.

Different historical rituals attest to the opinion that the reverse execution of rituals, under certain conditions, wipes out their earlier effects. Among the rituals at church consecration , the transfer of relics and their installation in the altar of a new church are of high importance. To this day, relics, statues and other "healing objects" (Working Aid 175) are removed from the church in order to create and depict the desecration of a building. The ritualized washing of parts of the building (to remove the places where the building or the altar was anointed with chrism ) has not caught on.

Ritual in the present

The rites in the church profanation emphasize the following three design elements.

Staging the promulgation of the act

Even if a Holy Mass is celebrated on the occasion of the profanation , the public reading of the episcopal decree with which the church is profaned is an element of the rite. This can also be done in the presence of the bishop himself. The reading of the decree stages the removal of holiness as a legal act of the competent authority.

The diocesan proposals to Kirchenprofanierungsliturgien and work using the German Bishops' Conference recommended the implementation of a procession with the Blessed Sacrament , relics and holy images from the deconsecrated church possible in a nearby another church where the former members of the old parish place in the future a new spiritual home should.

Profane churches in Germany (according to dioceses)

Only those dioceses are included in the list for which the linked articles contain largely complete overviews of the profane churches.

In the Protestant Church , no distinction is made between sacred, consecrated and profane spaces. As houses of God , rooms used for church purposes are a visible sign of God's presence in the world, for example when the congregation gathers for worship. In principle, they should be accessible to the general public and are under special state protection in Germany, for example under Section 166 of the Criminal Code or as a cultural monument .

The deedication of land and buildings used by the church are regulated by the individual Protestant regional churches through laws and ordinances. The sources of law are generally available on the Internet, for example the principles for de-dedication of the Evangelical Church in the Rhineland .

In addition to buildings and places, statues can also be subjected to profanation by removing them from their original sacred context or / and changing them through plastic processing and thus giving them a profane identity:

Statues can escape profanation when a building is profaned by being transferred to another sacred building, as has happened more recently with the profanation of Catholic churches.

In the Jewish faith, a synagogue is seen as a meeting place, place for prayer or scripture study. By inserting the Torah scrolls and attaching the mezuzah , a building becomes a synagogue. By removing the objects, a synagogue is profaned. Usually this happens when the church gets too small.